The other day I touched on the ancient Ethiopian, gluten-free grain called teff. Decent nutritionally, too—since it’s the smallest grain and hence, a higher proportion of the nutritional germ part to the rest of it.

I could only find the flour locally, so I ordered some from Bob. It’s weird stuff. The grains are the size of a . Yea, the size of a period. Period. And when you’re boiling it, it’s like a colloidal solution until it soaks up the liquid.

Bob’s also has a polenta recipe that I followed exactly. Here’s another, quite different. Here’s how mine came out, along with some roasted chicken and a simple chicken stock reduction. Yea, should have some greens but none on hand at the time. 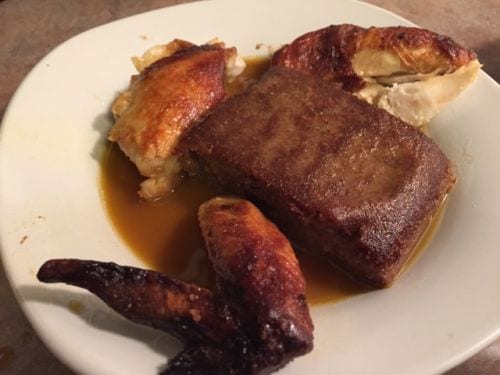 It’s quite tasty although, a bit too “herby” for my taste. Tim Steele said that cold, it tastes like leftover meatloaf and I can see that. My wife loved it and went for a second helping.

I think my preference would be to make it like you make grits, with just some butter, salt & pepper, so I’ll try that. Its consistency was exactly like grits prior to letting it cool. But first up, I’m going to make a porridge this morning and I think a bit of real maple syrup I keep on hand will be the ticket, especially if I dry roast the grains in the saucepan a few minutes prior to introducing the water.

Hopefully, you checked out the massive, 2-months-in-the-works post on the vast distinction health-wise between refined sugar and unrefined. Turns out that just like honey, maple syrup has a real nutritional profile. Less vitamins than honey, more minerals—plus various and sundry ‘nols’. I’d still use sparingly (though I’m taking in several tablespoons of raw honey daily, now), but nothing to be afraid of. It’s a whole food.

On a final note, nothing to write home about in terms of resistant starch. Tim has the full text of that paper and RS comes to about 6-10% of carbohydrate, depending on teff varietal. Not sure whether that’s in a raw, cooked, or retrograded state. Doesn’t really matter, since in that portion above, it’s about 30g of carbohydrate which in the best of worlds, would put it at a rather insignificant 3g of RS, if that. But there’s plenty of other goof reasons to enjoy it. It settled in my stomach perfectly. Had that been made of wheat I’d have been assured of nuclear heartburn.