So after my revelation and ink, it appears some people are confused, since I took pics of baguettes and posted them to a bog.

My intent was not a shift in values, but in focus.

Bea turned on The Oscars pre-laf-laf around 1 PM, I think. Here’s the deal. If you look at it as a comedy show, it’s actually quite good—in a Spinal Tap as serious drama sort of way. I did get her lafing a good deal about some of the over-the-top pretense that can only exist in Hollywood.

This year, we probably saw fewer of the best pic, best actor, and best actress (the only important ones, if “important” isn’t too reaching) films of any recent year in memory. Last year, my sole desire over the affair was to see Matthew McConaughey get best actor for the amazing Dallas Buyer’s Club. Check!

This year, I wasn’t really interested in best picture and while Birdman was just-OK for me, and I like Michael Keaton, I really don’t care much for Hollywood films about how much it sucks to be a success in Hollywood. Go. Fuck. Yourselves. …As one fat-rolodex pundit put it in the lead up, “Hollywood loves a movie about itself.”

…My interest this year was over 2 actors and 2 actresses (I did not see The Imitation Game, so Benedict Cumberbatch might have replaced one of those). Eddie Radmayne in The Theory of Everything, but thought Steve Carell edged him out in Foxcatchers. Reese Witherspoon in Wild, but thought Jennifer Aniston edged her out in Cake (not even nominated). The common thread I absolutely love is that two comedians really showed what they’re made of as professional actors. Still can’t get over Steve Carell…

For dinner, I happened to have some center cut pork chops, so got to thinking. Ever since I first did carnitas and persimmons way back in 2008, I just think pork and fruit is a wonderful thing. I’ve done a bunch of variations since.

Last night was courtesy of Emeril Lagasse: Pork Chops Stewed with Apples and Prunes, with Mashed Sweet Potatoes. A few variations. No fresh rosemary, so dry, and be careful (cut it in half). Fuji apple instead of Golden Delicious. White wine instead of cognac, half & half instead of cream. Also, my 4 chops were not 1 1/2 inches, so I basically did stuff 1/2 to 2/3 recipe. Also, big one: russet potatoes, not sweet potatoes. Sweets would have been a big misstep in my view, as I’ll explain after the pics. Click on ’em for the higher res. 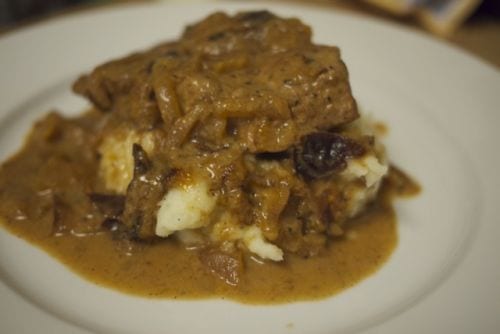 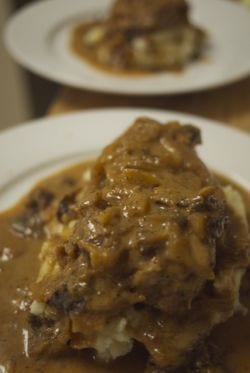 Beatrice will tell you that I’m my own most vicious critic. When I’m disappointed in the slightest thing, I might just leave it after a few bites. Life is too short. It’s not to say it’s not good or decent, but in the process of the whole process, one can build up certain expectations and for me, when not met or exceeded when it’s your own hand, leave it and live to cook another day.

This one blew me away. I don’t think that in my life I have ever done a dish with such a complex profile of sweet, savory, and salty. And that leads me to the mash. What really put this dish over the top was the russet mash, with just a bit of butter, bit of H&H, but very careful salt, up until the point where you taste the salt, but it’s not “salty.” If you know what I mean.

Additionally, when the sauce was reduced, I tasted and the sweet was a bit dominating. Just a few twists from the Himalayan pink salt mill, and it brought the sweet under better control and razed the savory immensely.

…I’m going to do this basic thing again, but next time I’m going to do as a braise in the oven at 175 until the pork is fork tender. This was my only disappointment. Pork was a bit dry (but in this case, you slice thin and dredge).