You can agree or disagree and change course. You can pursue a new path.

You can vow. Promise. You can sign on the dotted line.

You can ink it.

I made a significant decision the other day and wrote about it: Life Takes a Big Turn And Everything Changes. While I surely meant it, it wasn’t until I read the comments and the emails I’ve received that I felt like totally owning it.

So I inked it. 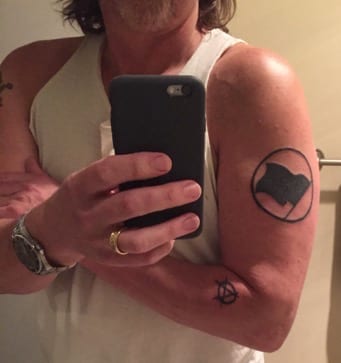 The black flag, and the color black in general, have been associated with anarchism since the 1880s. Many anarchist collectives contain the word “black” in their names. There have been a number of anarchist periodicals entitled Black Flag.

The uniform blackness of the flag is in stark contrast to the colorful flags typical of most nation-states. Additionally, as a white flag has been used to request parley or to surrender, the counter-opposite black flag would logically be a symbol of defiance and opposition to surrender.

Hit the link for more history and usage.

“Every normal man must be tempted, at times, to spit on his hands, hoist the black flag, and begin slitting throats.” — H. L. Menken

Onto the classic Anarchy symbol everyone knows.

The Circle-A is almost certainly the best-known present-day symbol for anarchy. It is a monogram that consists of the capital letter “A” surrounded by the capital letter “O”. The letter “A” is derived from the first letter of “anarchy” or “anarchism” in most European languages and is the same in both Latin and Cyrillic scripts. The “O” stands for order. Together they stand for “Anarchy is the mother of Order,” the first part of a Proudhon quotation.[8] This character can be written as Unicode codepoint U+24B6: Ⓐ. In addition, the “@” sign or “(A)” can be used to quickly represent the circle-A on a computer.

Instead of Proudhon—whom I read in the original French in the early 90’s while I was reading The Russian Radical (Ayn Rand) at the same time—I like this quote by another:

“Anarchy is all around us. Without it, our world would fall apart. All progress is due to it. All order extends from it. All blessed things that rise above the state of nature are owed to it. The human race thrives only because of the lack of control, not because of it. I’m saying that we need ever more absence of control to make the world a more beautiful place. It is a paradox that we must forever explain.” — Jeffrey Tucker

Most importantly, I harbor no illusions from either and consider both ideologies more wrong than right.

Let me give you an example. Now, I could pick apart the hell out of this but at the same time, understand that probably at one point—if you make the slightest effort to integrate context—Lenin was speaking to hearts more than minds.

“We want to achieve a new and better order of society: in this new and better society there must be neither rich nor poor; all will have to work. Not a handful of rich people, but all the working people must enjoy the fruits of their common labour. Machines and other improvements must serve to ease the work of all and not to enable a few to grow rich at the expense of millions and tens of millions of people. This new and better society is called socialist society. The teachings about this society are called ‘socialism’.” — Vladimir Lenin (1903)

Well, turned out that people really don’t work that way for myriad reasons and so decades later—and tens of millions dead—in the attempt to enforce Kum-Ba-Yah at gunpoint, now everyone’s into fascism, which I haven’t even touched on yet.

…I am above all an integrator and synthesizer, forever looking for iconoclastic opportunities for the sole purpose of making you feel like a fucktard (in consolation, I love realizing I’ve been a fucktard—means I’m not, in that context, anymore).