A Rare Picture of Richard
Moving To Cabo San Lucas Diary: I Just Bought a DoodleBug 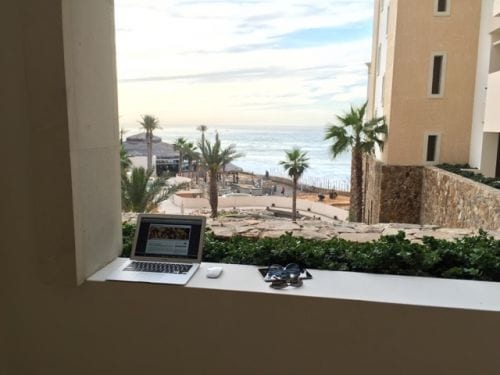 Posting the pics of myself Thursday night was an impulse encouraged by Beatrice. When she saw me after five days she kept mentioning my appearance; and not just physical, but spiritual—for lack of better word. Sure, I’d been on “vacation,” but it’s also been a working vacation centered around a business I stumbled upon developing here in Cabo San Lucas, Mexico. She knew something was fundamentally up with me about 10 seconds from this snapped moment. 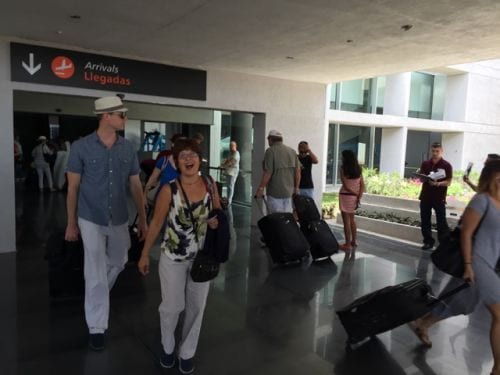 That last wasn’t in any way posted to announce that I’ve Arrived! have all the answers, and now have the physicality and spirituality (feeling good in my own skin) to show for it. I just know I’m on the right path now. When that happens, things change fast. People notice, fast.

Beatrice put it best yesterday after a while observing me: “In San Jose you’re a caged animal.”

So, for many reasons I’ll be writing about throughout the process, we’ve decided that the dessert “island” at the south end of the Baja Peninsula is probably the right place for us to relocate, and very soon. Research and planning are already in process. I might even be hauling my trailer down here very soon, as my initial settlement. 1,500 miles.

…So if, as Bea says, I’m a caged animal up there in California—in “The Land of the Free”—then seems to me—minding what words and concepts mean—that before I do anything else, I must escape, right? If being caged and feeling trapped is my paradigm—and there’s absolutely no way to not experience the negative consequences—then haven’t I to break free as just the first order of business? I mean, come on? How do you get right with a fucking cage? How do you get right in a fucking cage where you literally want to bite out the throats of most of your fellow inhabitants because you fundamentally loath them so?

It rings true to me. I hate America and I say that in truth. I have not the slightest sliver of pride in being an American (it got ruined—cool while it lasted), and I would not care a lick if it went the way of rapid exponential decay. Ruined social experiment, with cool digs. I do not care what happens to it, nor any inhabitant of it including myself while here. I stop short of actively wishing it ill, but at the same time, I’m a fan of natural justice. It will be interesting to see what might happen when people like me—or others for vastly different reasons—flee, and spend all dollars elsewhere—even while cashing in on social security or retirement paid by current workers—and that magnifies to the hundreds of billions in time, with those who remain being taxed to make up the difference.

Get your popcorn. I could care less what happens to America. It’s only proof to me that you ought never let a bunch of Puritans get in boats.

Take your Social Security; your State, Municipal, or Federal retirement and move to someplace where you can rent a place with marble floors and an awesome view of the ocean for $800 per month. Lift a middle finger. Laf at the working stiff suckers still buying into the lie and paying your way. Laf at them. Make fun of them. Send them pics of you lounging on the deck at their expense. Spare no hubris.

I am getting my ass out of America and I’m telling you now: it’s going to be a huge trend. America fucking sucks. Too many fucktards.

Escape is now my mantra and if you escape to a better place, then things change for the better because your entire paradigm is different.

Someone asked me in comments:

Richard – Have you cut out all booze?

“No, haven’t, but being busy most of the time on productive endeavors simply gives me better things to do. Hell, funny enough, but being here on vacation, I drink less than at home. First two days here I had a total of a beer, a margarita, and a Piña colada. Last evening, and most days, are very similar.”

What have you been eating lately?

What is the food/diet of the week/month?

You see, assholes like Mark Finnegan are like Moore and Eades groupies. They’ve got to have The Diet that is Good For Everyone, forevermore (easier to sell books). Rather than experimentation and change—meaning you’re dynamic, rational, thinking, skeptical—they see it as weakness…all the while, the fraudulent, dishonest, and manipulative intransigence of Moore and Eades is a sign of strength. But anyway, I can’t really care about fucktard wankers showing up to jerk off in my comments, so…

“Basically, I try to always prefer whatever is cooked by hand from a list of real food ingredients. I eschew stuff in boxes, processed food, fast food. Bottled salad dressings. Especially, all deep fried stuff, even french fries, now. If I do opt for the fries, it’s always something like just a few bites of them, leave 2/3 of them. Probably, eating ANYTHING deep fried ought to go as the #1 don’t do it.

“Otherwise, no, don’t care much. Last night, Bea and I ate in the room here in Cabo. We shared a wonderful bowl of caldo de pollo (truly awesome) and a flank steak quesadilla with guac and fresh salsa. We split a can of Mexican coke.

“Soon, we’ll do the breakfast buffet. I’ll probably have a croissant, brie cheese, a big bowl of mixed fruit including papaya; scrambled eggs, refried beans, some potato, and a glass of either orange juice, or this cactus & celery smoothie they have.

“No doubt by the pool this afternoon, we’ll share grilled fish tacos on corn tortillas garnished with fresh red cabbage, fresh salsa, and fresh Mexixican sour cream (which is amazing and creamy not paste, BTW).”

Here’s been an example of my Fuck Low Carb and Fuck Faux paleo breakfast most days here. Not afraid of anything. 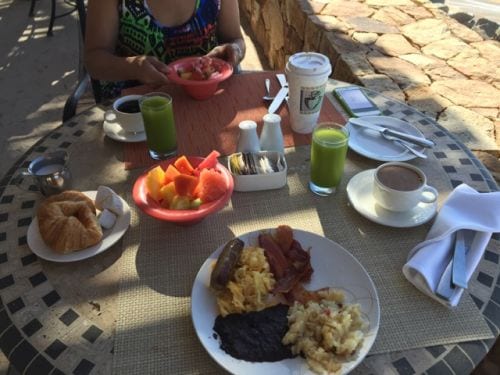 But you may notice I don’t have either two cubes of butter or, embarrassing, untoward helpings of sausage & eggs. And then, I never ever do seconds anymore, and I always leave almost a little something of everything. It’s an ethic I’ve come to embrace because I believe I got fat because of wall-to-wall gluttonous relatives, and with rare exception. They’re just gluttons about food, always have been. Occam’s Razor. I was just taught that way. More is always better. Clean your plate. Then go back for more. Thank the cook.

All of them only liked “paleo” while it lasted because it was a magic way to still be a glutton. Occam’s Razor. 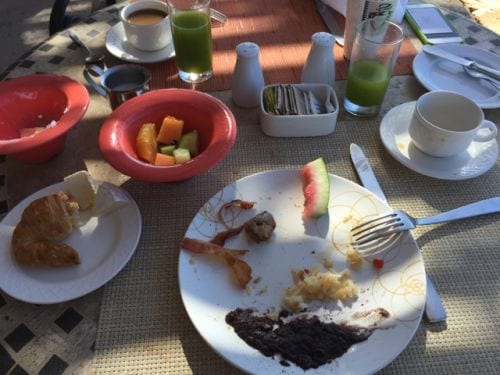 Beatrice could tell you, because she’s mentioned it a lot of times over months. I’ve become super critical of taste—I especially loath over spiced and especially, salty. I will not take more than a bite or two of stuff that doesn’t please me, and if it does, only a reasonable amount and leave something.

It works better than anything and just as another commenter said, that I agree with:

Thanks in large part to your blog, I have also come full circle, and food is once again just food. This is after about four years of wandering in the desert through many different highly restricting diets (vegan, paleo, keto, “clean”, etc.). What’s hilarious to me is that I’ve started right where I began, with Brad Pilon’s “Eat Stop Eat.” The addition of resistant starch makes it that much easier to fast. And that right there is easily 98% of what I actually need to be healthy and lean. The rest is just over complication. Thanks man.

I had a sneaking suspicion way back when, and this is like 2009. What if Brad is right, and so long as you’re not a total glutton, what you eat is less important than when you just don’t eat?

Alright, I’ll have more later. Right now, I’ve been using Google Earth to absolutely be amazed at what that drive down the Baja Peninsula in my lifted Beemer with big tires is gonna be like.