Wildlife-ing in Los Zacatitos (incl. a short story of a rattlesnake encounter)

Last evening I got back from the off-grid Zac’s Bar & Grill here in Los Zacatitos, Baja, Mexico, and was sitting out on the covered patio just musing. Actually, I was watching a gehko on the wall making a mark on a bug. He missed, then jumped after another, later. That was behind a column, so not sure whether he was successful.

But I had a couple of battery-powered, 120v ceiling lights on—via the 6, 12v-truck-battery bank and inverter, charged 366 days per year via solar panels on the roof—on, and moths were swirling. Suddenly a bat swooped in and by “swoop,” I mean that’s where the word comes from because that’s what it sounded like. Scooped up a couple and made his or her leave without even waiting for a thanks.

…I seem to have built up a quick immunity to the various bug bites and stings, as they don’t itch for more than about 30 minutes. I’ve learned to keep the lights off in the sleeping area for hours before bed. Best not attract them.

This morning, decided to make the 10-minute-ish walk to the beach and was paying less than the attention I ought and suddenly, almost stepped on this local friend. Once my heart started beating—@ 200bpm—again, I considered my situation. 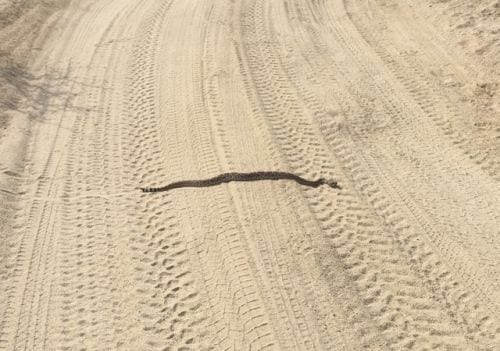 If you give him a chance, he’ll let you know you ought not tread on him. Plus, he does his part to control the rodent population; and, he eats nose-to-tail—literally. What’s not to love?

Given that, I decided he ought not be playing around in the road and get squished, so I determined to get him off it. Regardless of the risk, if just one rattlesnake life will be saved, it’s all worth it.

I tried some small pebbles dropped nearby, not on him. No joy. So, picked up some of that gravel, tossed it in his general direction, and that did the trick. Wish I’d have caught how quickly he got into a defensive coil. As I was getting ready to film, he began moving off, but I caught this 20 seconds and be sure and turn up the volume.

After my ocean swim and the circumspect walk back, there’s a foot long iguana in the back yard.

Coming back from my afternoon ocean swim my attention was diverted, and past runs a road runner, lizard in beak.

What an amazing privilege to be able to observe close and first hand (not TEEVEE) something that’s not a sanitized, scrubbed, disinfected, paved-over, made-up, politicized, socialized, media-ized, commercialized, start-up-ized, entrepreneurialized, capitalized, developed view of the wild.

…Watch out for those snakes in the grass. I know you’re about to embark on about a year and a half worth of agitating; deciding which one you’re going to stand in lines to give a thumbs up for….