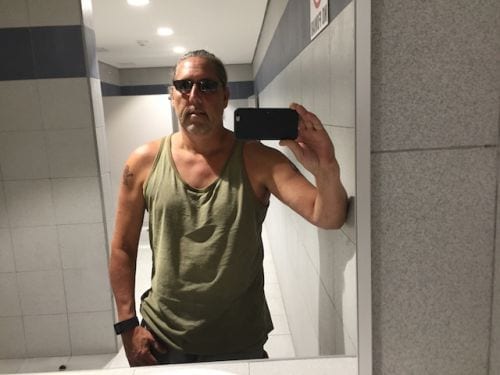 Hair tied back in a man-bun, back of head, cool like.

…My newest friend, a Canadian expat, just 200 yards away, drives a Harley, has 3 enormous Dobermans, plays Pink Floyd loud, and has a sign on his gate that proclaims:

Whenever I snivel? I go down to the beach—5-minute walk away—so that I’m automatically reminded about what the fuck I’m doing and why.

I fucking feel more alive than I have in years. I quite enjoy having some problems to solve. Reminded me of having my ‘Vette break down 40 miles from home in Toulon, France, after I drove it from where it came in to port in Rotterdam. Got it sorted.

…Running low on water…another problem to sort. Next week, a Mexican guy is going to truck out 10,000 liters over 12 miles of dirt road for $65, to fill my two 5,000 liter, cross-connected tanks.

I love this world! Lots lots more later, including the story of no gas stations in 340 KM, and we missed the memo.

In the meantime, find a way to fucking love your life. Really, really love it! 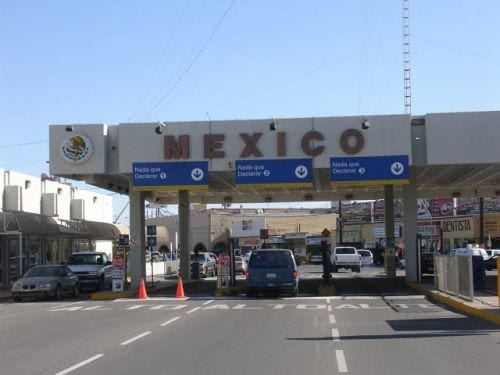 And remember, no looking back, just forward.

Trip began Monday at noon from San Jose where I hit the 101 south to Santa Barbara, stopping off in Montecito for the evening at the invitation of Drs Mike & Mary Dan Eades. She had amazing sous vide ribeye steak at the waiting, accompanied by roasted asparagus, cauliflower puree, and a fantastic caesar salad. I provided the old vine zin. Sat around the table and chatted until midnight and rest assured: all the world’s problems have been taken care of.

Soon after the morning rounds of cafe Americanos, I headed out, down the Hwy 1, and stopped off in Malibu for a brief lunchtime visit with Mark Sisson in his backyard, overlooking Malibu canyon. More world problems solved.

Picked up my brother at SAN in the late afternoon and we snatched a cheap room at Motel 6 just a few hundred yards from the border and beginning now, 5am:

Or, is it really just a day off?

What would you wager that her memorials don’t trump yours? Or, how about her infant’s eventual resentment over lack of birthright memorials compared to your Memorial-Day beer pong?

END_OF_DOCUMENT_TOKEN_TO_BE_REPLACED

OK, thats’s indeed a bold title, but this is a TL;DR post. See, this one was drafted a good while ago. The Duck Dodgers decided to prefigure with a few things that have been posted—like this and this—but then there were more revelations, so what we have is this one, about 900 words and way incomplete, and a 4,000 pound whopper coming up next week. So here’s the “Too Long; Didn’t Read” version for the lazy asses.

Update: Well, it didn’t take long for a commenter to misunderstand what we’re doing here, so let me preface some clarification. This is not an assertion of causality searching for a hypothesis. It’s clearly a set of reasonable, testable associations that give rise to a hypothesis that fortification or enrichment of foods with iron (and perhaps other vitamins and minerals) may have a host of unintended consequences and this should be studied specifically. The follow-on post will contain a lot more justification. For additional clarification I’ve added an additional image below as well.

It’s becoming more commonly known that iron overload can be a prominent feature of obesity and metabolic issues. Obesity and insulin resistance has been linked to an iron-enriched diet. Obese people have iron in the hypothalamus of their brains, their urine, their adipose tissue, and they do not absorb iron well and iron blood levels can be low in some cases. The body may very likely be using adipose intentionally to keep excess iron out of the blood so that pathogens and cancer cannot thrive (i.e. anemia of chronic disease). As those studies point out, adipocytes use hepcidin to regulate the iron status of the blood.

END_OF_DOCUMENT_TOKEN_TO_BE_REPLACED

This is an effort to pay back Angelo Coppola and Stephan Guyenet; both in terms of a recipe for leurs-mêmes, but also to pay it forward to you, because it really hits a lot of the bases they cover in a podcast that you’re missing out if you don’t take the time to listen to.

…Frankly, it took me three days to get through it, but what that means is that even though I got interrupted dozens of times, I always came back, rewound a few minutes to re-acquire the beat, and could do nothing else but take in every really sane and enlightening moment. Yea, I have 2 or three quibbles with Stephan, mais pas suffisamment merveilleuse to make any big deal about, so they remain forgotten.

Just do yourself a favor enormement-like, and take it in.

Then, make this, eat some every day until you run out, then make another pot and keep doing that ad infinitum.

END_OF_DOCUMENT_TOKEN_TO_BE_REPLACED

That last word in the title is tongue in cheek, of course. For years—before I got tired and banned her—I had this commenter—Eat Less Move Moore (get it?)—who literally made reference to jimmy moore in each and every of several hundred comments, and was the one who first used “webpire” to describe his online activities.

Of course, it put her into context. Nobody knows how well Jimmy does $$$-wise with his spare bedroom Low-Carb business, but it’s certainly not proportional to any sort of Empire I’m aware of.

Rather, it was simply a case of “everybody loves Jimmy.” Jimmy is a likable, affable guy—in person, and in his online presence. And, as a businessman, a loss-leader sort, where he gives of his time and efforts in trust that those who like what he does will support him via his various ways he has available to pay back—recognizing that any individual is perfectly able to get away scott free for life.

And, over the years, he also goes so far as to entertain alternative and even contrary ideas (to LC) on his blog and podcast, with no real guarantee that the information he’s exposing his readers and listeners to for free isn’t undercutting his own livelihood. This is admirable.

This is part of why I gave him a pass on inconsistencies for a long time. And of course, the those living in glass houses throwing stones thing.

END_OF_DOCUMENT_TOKEN_TO_BE_REPLACED

At various times and places, the predominant emphasis was on one of these things:

I’m sure I’ve overlooked a devil or two (I just can’t get excited about avoiding certain light spectrum!). But these evils gave rise to various fads all along the way, sometimes emphasizing one evil, sometimes integrating several. I’ve participated in and promoted a number of them myself, if not all of them.

There are many others but for purposes of brevity I’m only touching on the mostly diet related stuff and setting aside all the various lifestyle, fitness, athletic stuff like workouts, play, fasting, footwear (and lack thereof), cold exposure, sleep, sex, social relationships, workaholism, etc. And frankly, I find the endeavors in all of those lifestyle things to be far more “paleo” than virtually all of the dietary and food stuff, which, frankly, has kinda been a Royal Fucking Mess.

I really just wanted to toss this out there for thought and discussion, so rather than a long essay, let me show you some of what I’ve been reading and chewing on during my recent low-activity status after spine surgery.

END_OF_DOCUMENT_TOKEN_TO_BE_REPLACED

Haven’t done one in months, but as a lot is changing in life, thought I might toy with putting one out there every few weeks to a month and see how it goes.

On the last point, less than 6 days from departure to Mexico for a minimum of 5 months. Again, link to the Newsletter. From there, you can access archives. My series on “The Milk Diet” might interest some.

I think I have a real treat for you. I asked Karl Seddon, creator of Elixa Probiotic, to write a post offering his perspective on probiotics and prebiotics, or FODMAPs. Little did I know he was clever enough to write such an engaging travelogue about Uganda, making it such an engaging read. I previously blogged about my experience with Elixa here.

Based on the emails I receive, I’d say that the average person interested in probiotics and gut health are well-read on the topic. Due to the relatively recent emergence of majority access to the internet and mainstream awareness of the microbiome, there’s a huge amount of crowd-sourced research and shared information regarding probiotics, the microbiome, and prebiotics—or what I prefer to call FODMAPs.

Self-experimentation, anecdotal meta-analysis (collating 2nd hand reports), and scientific experiments are all legitimate means to increase our understanding of how the gut bacteria affect us and how to manipulate this understanding to our advantage.

Although I am the developer and manufacturer of Elixa Probiotic, this article does not directly concern probiotic supplementation. There is plenty to discuss about the individual attributes of Elixa, however I would prefer to start chronologically by detailing some of the R&D that came before. Hopefully this will be a brief insight into some of the thoughts and work performed during the 3+ years of development that has occurred since I graduated.

With a science-based, academic background, most people will assume: Oh, so you learned this stuff at university, right?