Bitten By The Fitbit Bug

Yep, got it yesterday early afternoon and pretty soon became quite intrigued and even motivated by the little gizmo.

I was only peripherally aware of Fitbit and a few wearable data loggers—probably by means of a walk by at Best Buy kiosk or something. First impression: how ridiculously obsessive.

Then a commenter in a post a while back spoke very highly of it.

Even more so than calorie intake, I’ve found that the traditional ways of estimating calorie expenditure are WAAAAAAYYYYY off. Using the Harris Benedict formulas that Colpo reprinted in the Fat Loss Bible, I calculated my Total Energy Expenditure at about 3,300 calories a day (that’s RMR with an activity multiplier). I’ve been using a fitbit, which calculates RMR with the same formula, and uses your daily movement and logged activities to come up with a total. Over the past 28 days, my lowest burn was 3,253 and highest was 4,334, and average was 3,773. On top of that, the RMR estimates can vary dramatically from actual burn.

Still, I’ve really embraced the entire tracking thing over the past month, and even with all the possible inaccuracies, I’ve seen major benefits. I dropped 14 pounds, and bodyfat percentage suggests it’s over 90% fat. The fitbit reports suggest that I should have lost 10 pounds, and the extra may be water loss(which can happen on any diet, though is usually greatest on low carb), or due to TEF, cold exposure (which I’ve also been doing), or some other hidden factor. My energy has been good, and I’m not battling hunger cravings (I used to get major hunger when doing IF all the time, but kinda enjoyed it), and I feel more in control now than I have in years. Calorie Counting may have lots of problems, but I currently believe it’s the most powerful strategy for altering bodyweight available.

I hear ya. I think part of the reason I’m enjoying it this time is because of the fitbit software. It makes the whole thing feel like a video game or fantasy sports league, so that helps make it fun. Also, you get to see both calories in and calories out, and the second half of the equation seems to be ignored by most everyone, especially people who feel compelled to tell you about the first law of thermodynamics.

I used a food diary a long time ago, and hated it. I also used a different piece of food logging software a couple years ago, and didn’t like that much, either.

So this is what I found for myself almost immediately after setting it up, which was about 14:30 yesterday. However, I did log all the food / drink for the whole day. It puts you in a funny competition with yourself. It’s weird, you see both calories in/out in real time and as commenter John points out, it’s part calculated, part actual measurement, and if you want, you can even log stuff like a specific workout activity. It uses it all to estimate what energy you’ve expended up to that second in time.

Kinda weird to get out of bed and learn you’ve already expended 600 calories for the day. Don’t know how it does it, but it seems to differentiate between sitting, laying on the couch, and sleep. Last night, I went to bed 5 minutes before midnight and this morning, learned I fell asleep at 00:03.

Add to that, with your smartphone, you can log food / drink in real time, and the app is killer easy for that and fun, since you’re curious about how it’s going to stack up with your daily track. Everything has been in the database so far. Plus, depending on what goal you’ve set, you can see instantly how many calories you can eat in order to get to the caloric deficit point corresponding to your goal and how quickly you want to do it. It turns it into a dynamic, real-time process where the picture is always changing, as you’re always burning energy, so have eating headroom as time goes by.

I found it motivational. Dogs got a ridiculous 4 substantial walks between early afternoon and late night because I wanted to hit 5,000 logged steps in less than half a day. Here’s some shots. 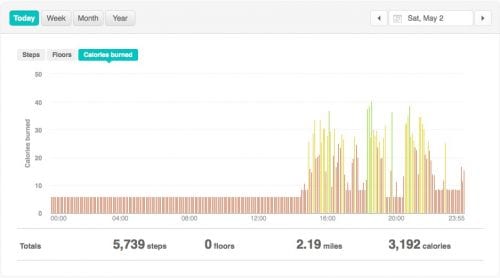 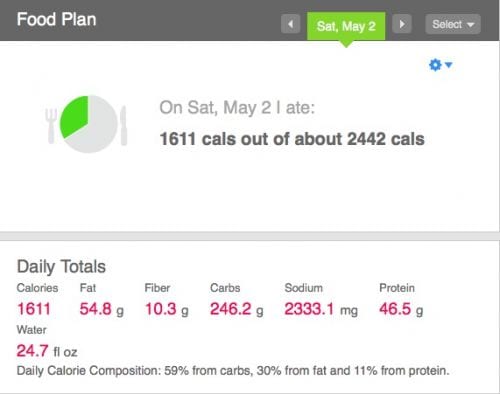 I woke up quite hungry, but with little appetite. Dog walk put me in the mood for that high calorie, high fat breakfast. 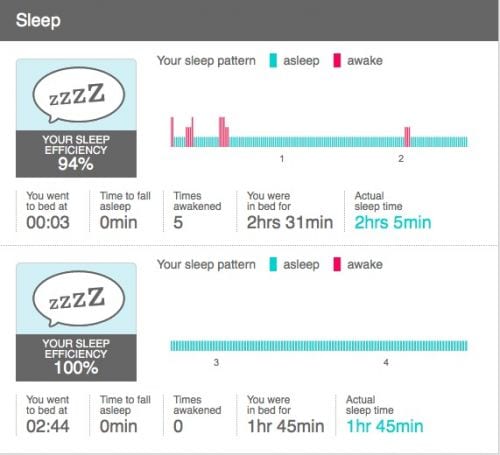 There’s lots more, like heart rate monitoring, both at least and correlated with activity, and more. One disclosure is that there’s a few extra bells & whistles if you get the premium subscription for $50 per year, which I did. Primary reason for me is that I wanted more than just calories. I wanted macro breakdown and nutrition data.

Finally, there’s a social aspect, so if anyone has one, here’s my profile if you want to hit me up with a friend request so that we can deride one-another’s pathetic progress.

I’ll post again in about 30 days after I’ve gathered much more data.