I’m not going to be snarky about this because I don’t in fact count it as a “cure,” yet. But, improved for sure, and no thyroid meds. Here’s the previous posts on the topic:

After I wrote the first post, having test results indicating a diagnosis of Hashimoto’s (elevated TPO Antibody and TSH), I set about to institute a protocol involving a whole list of Don’ts, then re-test in three months. I ended up not following most of the Don’ts, but rather focussed on the gut, per my subsequent posts; i.e., Dos rather than Don’ts.

Well, because of life getting in the way, it ended up being 5 months instead of three between tests. I didn’t bother abstaining from alcohol, nor gluten. As I thought about it, it seemed to me that living under a bunch of restrictions, avoidances, and abstentions, even if a cure, would be worse than the disease. I agree in that case: just take the meds.

But what if, instead, living normally but adding in some Dos might actually perform better, and then all I have is sensible choices, not a bunch of No-Nos to make me “Bulletproof?” So, only two real avoidances:

Curiously enough, the massive drop in appetite resulted in me dropping about 15 pounds in the last few months, from 195-200, down to 180-185. And still dropping. My recent 5-day excursion to Los Zacatitos with morning and afternoon snorkeling daily—and eating more fruit than anything else—I dropped 3-4 pounds. 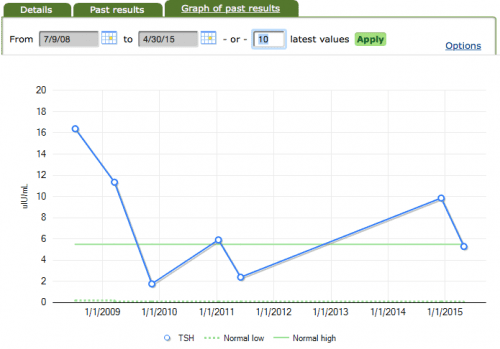 For some reason, the Doc didn’t order up the TPO Antibody, which was 216 (<=35 IU/mL) last time, probably figuring that autoimmune is autoimmune and it’s not going to improve. I’m not going to sweat it. It’s enough improvement in 2 of the three other numbers to continue the course, re-test in another three months or so, and ensure the TPO gets done next time.

They also did fasting blood glucose. For years I’ve had high, like 105 – 115, sometimes 120 or so during a fast, and I’ve long though it’s because the fast is in the realm of an already low carb regime (physiological insulin resistance). I haven’t been using my meter lately, so I didn’t know where the added carbs were going to take me, didn’t want to freak myself out. But, yesterday’s lab test came back at 89, first time I’ve seen under 100 in years.

On a final note, I know it’s way heretical to suggest that grains of any kind can be therapeutic. The problem is, if the goal is to avoid or eliminate gluten, then:

In terms of the Gluten-Free craze, this is worth reading: The gluten-free craze is out of hand. Here are 8 facts to counter the madness. An example.

This poses a dilemma, of course, and makes a diagnosis subjective. Studies — such as this one in the journal Gastroenterology — have found that many people who think they have non-celiac gluten sensitivity actually don’t. Some wonder whether gluten sensitivity truly exists, or if there’s something else going on.

In terms of grains being potentially therapeutic, there’s this: An opportunistic pathogen isolated from the gut of an obese human causes obesity in germ free mice.

Lipopolysaccharide endotoxin is the only known bacterial product which, when subcutaneously infused into mice in its purified form, can induce obesity and insulin resistance via an inflammation-mediated pathway. Here we show that one endotoxin-producing bacterium isolated from a morbidly obese human’s gut induced obesity and insulin resistance in germfree mice. The endotoxin-producing Enterobacter decreased in relative abundance from 35% of the volunteer’s gut bacteria to non-detectable, during which time the volunteer lost 51.4 kg of 174.8 kg initial weight and recovered from hyperglycemia and hypertension after 23 weeks on a diet of whole grains, traditional Chinese medicinal foods and prebiotics. A decreased abundance of endotoxin biosynthetic genes in the gut of the volunteer was correlated with a decreased circulating endotoxin load and alleviated inflammation. Mono-association of germfree C57BL/6J mice with strain Enterobacter cloacae B29 isolated from the volunteer’s gut induced fully developed obesity and insulin resistance on a high-fat diet but not on normal chow diet, whereas the germfree control mice on a high-fat diet did not exhibit the same disease phenotypes. The Enterobacter-induced obese mice showed increased serum endotoxin load and aggravated inflammatory conditions. The obesity-inducing capacity of this human-derived endotoxin producer in gnotobiotic mice suggests that it may causatively contribute to the development of obesity in its human host.

The more and more I experiment such as this here, and The Duck Dodgers delve into hormesis, the more it becomes clear to me that dose makes the poison, and everything is tied to gut health.