Rare Newsletter Update
The Fall Of The Jimmy Moore “Webpire”

At various times and places, the predominant emphasis was on one of these things:

I’m sure I’ve overlooked a devil or two (I just can’t get excited about avoiding certain light spectrum!). But these evils gave rise to various fads all along the way, sometimes emphasizing one evil, sometimes integrating several. I’ve participated in and promoted a number of them myself, if not all of them.

There are many others but for purposes of brevity I’m only touching on the mostly diet related stuff and setting aside all the various lifestyle, fitness, athletic stuff like workouts, play, fasting, footwear (and lack thereof), cold exposure, sleep, sex, social relationships, workaholism, etc. And frankly, I find the endeavors in all of those lifestyle things to be far more “paleo” than virtually all of the dietary and food stuff, which, frankly, has kinda been a Royal Fucking Mess.

I really just wanted to toss this out there for thought and discussion, so rather than a long essay, let me show you some of what I’ve been reading and chewing on during my recent low-activity status after spine surgery.

What follows might be really surprising to you, but not nearly as surprising as what’s coming in a little while—another installment of The Duck Dodgers—and quite unlike anything we’ve ever touched on. In short, we’ve been on the trail of something that forms a reasonable hypothesis towards a common denominator to explain all global dietary paradoxes, particularly the French Paradox, and other epidemiological paradoxes. Stay tuned. …And no, it’s not generally regarded as a toxin or anti-nutrient…it’s not even a compound. (…The juxtaposed irony with the opening of this post isn’t lost on me.)

The following is not to be taken as advocating making gluten or grains a dietary staple. It’s meant to question the just-so narrative surrounding grain avoidance and to prefigure what’s to come.

Diet fads are destroying us: Paleo, gluten-free and the lies we tell ourselves, Salon, by Michael Schulson, Religion Dispatches

—The author of “The Gluten Lie” on our fruitless search for clean living, and why we’re so quick to scoff at science

The numbers are hard to pin down, but roughly 1.1 million Americans keep kosher in their homes. Around 15 million are vegetarian. Meanwhile, according to a 2013 survey, more than 100 million Americans are trying to cut down on gluten, and (as of 2014) more than 10 million households are gluten-free. Simply put, gluten avoidance is the reigning dietary restriction of our time.

It’s harder to pin down why gluten-free diets should have conquered the culture so quickly. Few people have the kinds of serious medical conditions, such as celiac disease, that necessitate the elimination of gluten from the diet. Billions of people thrive on gluten-rich foods, all around the world.

Yet somewhere in our collective search for health, security, and purity, gluten transformed into a mainstream taboo. Scientific-sounding language (and savvy marketers) have driven this transformation, though one suspects that mass gluten avoidance has more in common with religious food restrictions than it does with anything premised on actual medical data.

Fittingly, Alan Levinovitz is a religion professor at James Madison University and a chronicler of our peculiar dietary culture. In his new book, The Gluten Lie, Levinovitz digs into the fear and moralizing that surrounds dietary fads, including gluten avoidance and the MSG scare. […]

“I saw this countercultural rejection of grains, and then I saw almost the exact same thing, with the same kinds of hyperbolic claims, happening again with books like Grain Brain and Wheat Belly. And I thought to myself, you know, it’s funny, people are trying to debunk these fad diets with scientific evidence, but what they’re not realizing is that really these beliefs aren’t scientific at all. They’re wrapped in scientific rhetoric, but ultimately they’re quasi-religious beliefs that are based on superstition and myth.”

Against the Grain, The New Yorker, by Michael Specter

The most obvious question is also the most difficult to answer: How could gluten, present in a staple food that has sustained humanity for thousands of years, have suddenly become so threatening? There are many theories but no clear, scientifically satisfying answers. Some researchers argue that wheat genes have become toxic. […]

Joseph A. Murray, a professor of medicine at the Mayo Clinic and the president of the North American Society for the Study of Celiac Disease, has also studied wheat genetics. He agrees with Kasarda. “The wheat grain is not a lot different than it was fifty years ago,’’ Murray told me. “Chemically, the contents just have not changed much. And there is something more important to note. Wheat consumption is going down, not up. I don’t think this is a problem that can be linked to the genetics of wheat.”

But something strange is clearly going on. For reasons that remain largely unexplained, the incidence of celiac disease has increased more than fourfold in the past sixty years. Researchers initially attributed the growing number of cases to greater public awareness and better diagnoses. But neither can fully account for the leap since 1950. Murray and his colleagues at the Mayo Clinic discovered the increase almost by accident. Murray wanted to examine the long-term effects of undiagnosed celiac disease. To do that, he analyzed blood samples that had been taken from nine thousand Air Force recruits between 1948 and 1954. The researchers looked for antibodies to an enzyme called transglutaminase; they are a reliable marker for celiac disease. Murray assumed that one per cent of the soldiers would test positive, matching the current celiac rate. Instead, the team found the antibodies in the blood of just two-tenths of one per cent of the soldiers. Then they compared the results with samples taken recently from demographically similar groups of twenty- and seventy-year-old men. In both groups, the biochemical markers were present in about one per cent of the samples.

“That suggested that whatever has happened with celiac disease has appened since 1950,’’ Murray said. “The increase affected young and old people equally.” These results imply that the cause is environmental.

The gluten-free craze is out of hand. Here are 8 facts to counter the madness. Vox, by Julia Belluz

Studies — such as this one in the journal Gastroenterology — have found that many people who think they have non-celiac gluten sensitivity actually don’t. Some wonder whether gluten sensitivity truly exists, or if there’s something else going on.

An alternative hypothesis suggests that people who say their symptoms improve on a gluten-free diet may actually be reacting to another set of carbohydrates in wheat called called FODMAPs (fermentable oligosaccharides, disaccharides, monosaccharides and polyols). In other words, it’s not the gluten that’s bothering people, but other sugars found in wheat. […]

One of the leading researchers in the area, Dr. Umberto Volta from the University of Bologna in Italy, put it this way: “This is an emerging condition mainly self-reported by people who claim an association between foods containing gluten and digestive symptoms.” While some self-report an improvement in symptoms, this is usually “a result of a placebo effect unavoidably related to the elimination diet.” When these patients are assessed more thoroughly, he added, it’s often other factors — lactose intolerance, FODMAPs — rather than gluten that cause their discomfort. Still, gluten gets the blame.

A Call To Abandon The paleo Diet And The Pursuit Of Ancestral Health, Body IO, by John Kiefer. Part 1. Part 2. I’ll consolidate the points from both:

…On point #8, you might think it’s a typo, but it’s not. It’s actually a kinda in-your-face, because virtually all modern vegetables are more hybridized and selectively modified than much of what paleo advocates we eschew.

20 Things You Didn’t Know About Paleo, Chris Kresser. Each point is elaborated upon in Chris’ post.

Last but not least, Mark Sisson (who gets a favorable mention in Part 2 of that “Abandon paleo” series, above). I just saw these images last evening via Jamie Scott’s Twitter feed. 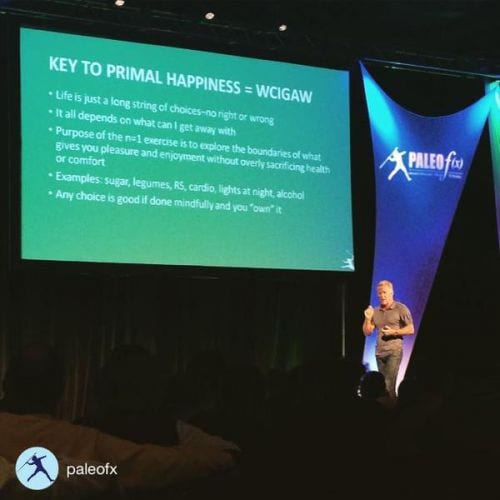 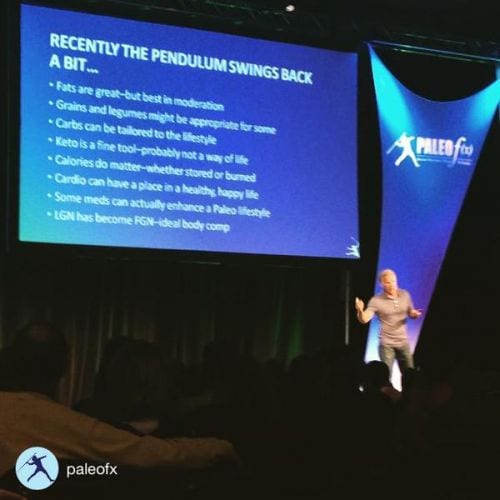 Nope, I don’t know what that last point refers to.