What Precisely and Explicitly Are You Memorializing?

Or, is it really just a day off?

What would you wager that her memorials don’t trump yours? Or, how about her infant’s eventual resentment over lack of birthright memorials compared to your Memorial-Day beer pong? 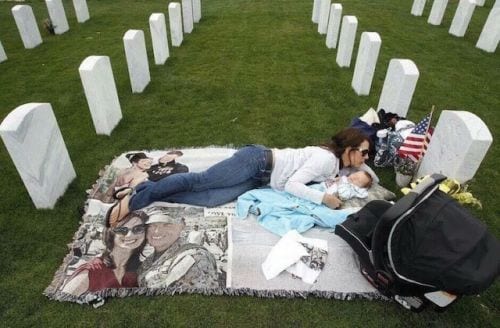 I consider the loss insufferable and wholly unnecessary in any context that contemplates humanity qua human individual. Sorry. …I’ve told you before that I was a military officer mostly for the cool job…it was geopolitically engaging. The foe du siècle had strategic bombers and submarines, nukes galore, and air-to-air and surface-to-air arsenals and I knew the “specs” of each one that could engage a U.S. Navy warship at sea. Sure, I lacked almost every deeper insight I now hold, but when Mr. Gorbachev Tear Down This Wall did come down in 1989 and the Eastern social gig got exposed by merely peering over crumbling rubble, the last thing I wanted to do was participate in the contrivances of finding a new enemy—particularly one that was a socio-philosophical problem (with convenient geopolitical overtones, in my opinion), and not a strategic-technological one, which I had signed up for.

So I got out in two years’ time, soon as the contract was up.

Let someone else deal with 14th century, dirt scratching savages who’ve missed every important memo since about 1300. But that’s unfair, even. It’s clear to me now that whether it was our geopolitical policy—or merely strategic support of regional interests who wanted America to bear its costs and Memorialize their dead one day per year over a day off—and beer pong—I only wanted the mano-a-mano deal the Soviets at least made a good show of offering.

I got an immediate reply…

she wanted a macho guy and got what she deserved.

And the child? And is every hot HC Queen supposed to understand geopolitical realities and “unintended” consequences at 18?

suffering is unavoidable. she is probably suffering less than most people on earth.

Ah, collective accounting is always the last bastion of the privileged who find they need to comfort you. Me:

Oh, so it all washes out in the collective stew of commiseration. Got it.

And for once, I’m not even going to elaborate if you don’t feel me here. But I’m also going to tell you why. This morning, I woke up to an email from my oldest, most intimate friend on Earth, going back to 1987. He wants no public exposure, but since he spent some time writing it for me, it would be a shame to not pay it forward.

It’s about my move to Baja. I leave in about 16 hours, for good—though I might end up elsewhere over the years, though never back in the US for more than a visit if I can help it. I realized I’d forgotten to tell him so I shot out some informations.

Welcome to the expat club. It is the only way to live. And your new digs look fantastic.

One important piece of advice, learned the hard way. You are becoming an expat to be free, but you will never be free if you continue to define your new life relative to your old life. Whenever you compare the two, whenever you say, in effect, “my new life is better than my old because…”, you inadvertently trap yourself in your old life to some degree. It is still capturing your mind and thoughts, and worst of all, your emotions. I was angry for years about American society when I left. It took me YEARS to get over it. And only then was I free. So don’t make the mistake I did. Get over it NOW. Don’t ever think or talk about it again. Only talk about the positives of where you are and where you are headed. It will do great things for your soul, quickly, which is why you are moving in the first place. This was for me the biggest lesson of them all. The buddha put it this way: “You are what you think about for years.” So if you continue to think about worthless women in the US, or whatever, that anger will remain a part of you and like a poison undermine the new life, and new you, that you are seeking. Here’s the danger: you, like me, have this little voice in you that says “But that’s the truth, so I should speak it!” Your allegiance to the truth will, in this case, lead your soul backwards and downwards. Because actually, it is NOT the truth. The truth is holistic and positive. The truth is the life you want, not why you are leaving the one you have left behind. It is a negative subsumed by the positive. You cannot strip it out and express it on its own, as you are doing.

You have no need to prove to others why you are leaving, as if you need to explain yourself. You don’t. When you finally, truly feel that you don’t have to explain yourself to anyone, that you are comfortable with your choices, then you are comfortable with you, with life, with the world, and your are free. Get to that point as soon as possible. I love you for this decision, you courageous sonofabitch!

I’m going to give it a try.