Beatrice was away for a girls’ weekend. In itself, rather hubristic, but I can man up for it and house sit the doggies. The new Fitbit made them happy and they got more walks than average. …That Bea did a girls’ weekend just two weeks ago with a different set of girls is no matter at all; says nothing about me.

What’s important is the leftovers she brought back, including this. 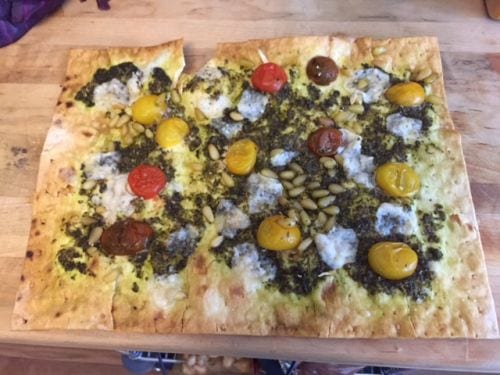 I think it’s called a flatbread. Could be called soda crackers with stuff on it to make soda crackers a bit chewy; but I agree, flatbread sounds way more chic.

I was going to toss it, but then realized: THERE’S CHEESE ON IT! One doesn’t toss cheese, even when moldy. Plus, some cheeses are known for their mold. I don’t discriminate when it comes to mold on cheese. Can you see it? Those white blobs. I do believe that’s cheese. Don’t even get me started on the carelessly splotched pesto, the willy-nilly sprinkling of added pine nuts, or three (count ’em) colors of tomatoes.

So, I cut a square (I have a custom in Fitbit called “calories” and the square gets a 100 kcal estimate).

Anyway, glad I didn’t toss it as some pathetic excuse for a real pizza, as I immediately felt fucking righteous hubris well up in me, with every bite.