I Dare You To Not Make This Your Staple: Mixed Bean & Polish Sausage Soup

This is an effort to pay back Angelo Coppola and Stephan Guyenet; both in terms of a recipe for leurs-mêmes, but also to pay it forward to you, because it really hits a lot of the bases they cover in a podcast that you’re missing out if you don’t take the time to listen to.

…Frankly, it took me three days to get through it, but what that means is that even though I got interrupted dozens of times, I always came back, rewound a few minutes to re-acquire the beat, and could do nothing else but take in every really sane and enlightening moment. Yea, I have 2 or three quibbles with Stephan, mais pas suffisamment merveilleuse to make any big deal about, so they remain forgotten.

Just do yourself a favor enormement-like, and take it in.

Then, make this, eat some every day until you run out, then make another pot and keep doing that ad infinitum. 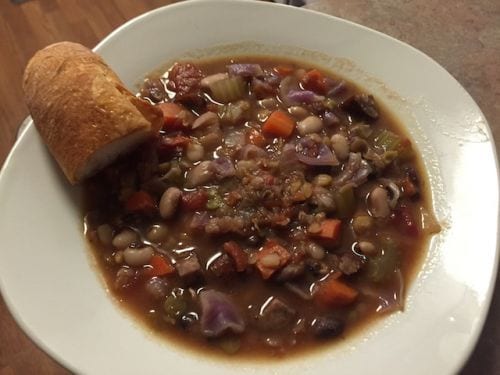 This began as a polish sausage and cabbage soup courtesy of mom. It was so simple and could be done in about 20-30 minutes on boil: a 1lb polish chopped up, 1/2 to 1 head of cabbage, an onion and a large can of chopped tomatoes, cover with water and boil. Done, except season to taste (salt & pepper).

Toss the beans in the bottom of a slow cooker, add the stock, put it on high. Then do everything else and add it on top as you chop, slice, and dice. add enough water at the end to barely cover. Realize that as veggies cook, they give up moisture.

Be careful to leave the beans on the bottom so they area always immersed in liquid. This way, about 3-4 hours on high in the slow cooker, they’re tender.

…BTW, the bread in the pic is artisan French baguette (Acme) non-fortified organic and I’m telling you it makes a difference. Never gives me heartburn.

Update: In the Wall Street Journal: Want Great Longevity and Health? It Takes a Village. “The secrets of the world’s longest-lived people include community, family, exercise and plenty of beans.”

More than 65% of what people in the blue zones ate came from complex carbohydrates: sweet potatoes in Okinawa, Japan; wild greens in Ikaria, Greece; squash and corn in Costa Rica’s Nicoya Peninsula. Their diet consists mainly of vegetables, fruits, whole grains, beans and other carbohydrates. They eat meat but only small amounts, about five times a month, usually on celebratory occasions.

The cornerstone of every longevity diet in the world was the humble bean. One five-country study showed that beans were the only food that predicted a longer life—for each 20-gram serving (about two tablespoons) eaten a day, the chance of dying dropped by 8%. Fava beans in Sardinia, black beans in Costa Rica, lentils in Ikaria, soybeans in Okinawa. Seventh-Day Adventists, America’s longest-lived subculture, eat all kinds of beans, taking their cue from God’s injunction, in the book of Genesis, to eat the fruits of “seed-bearing plants.”