The Tyranny of Assets

In 1979, when I graduated high school in June of that year and moved with my parents to the Portland, OR area, then drove across country diagonally to Chattanooga, TN in August to begin college at the Born-Again Christian enclave of Tennessee Temple University, everything I owned needed fit easily into the back of the 1974 Mazda RX-3 wagon I’d bought from my dad for $1,000 worth of work in his painting company. I didn’t even have to put the rear seats down.

How did I possibly survive with no collection of assets? Perhaps, not being weighed down, I focussed on other things; like: observing the world around me, asking questions, discovering the joy of Very Bad Things-so-called, and even engaging in some study now and then to collect grade assets…and maybe, with nothing better to do than thrive by working in fast-food joints and auto-parts stores, paid the lion’s share of the cost of acquiring a college diploma-asset. Eventually.

That stint lasted only a freshman year, and when I returned to Troutdale, OR that late spring, not only did all my assets still fit in the back, but there was room for the stuff of two other guys from the same Born-Again church, sharing the ride and drive.

After a year with zero asset accumulation—beyond a few computer science, math, and physics courses at Mt. Hood Community College—I transferred to Oregon State University in Corvallis, where I signed up with the Navy ROTC. Though I was increasingly taking on secular liability that would earn me hellfire—while simultaneously denying me fantastical streets of gold and the added opportunity of eternal sycophantic worship at the feet of Jebus at no additional cost—joining the Navy as a junior officer seemed a nice offering to doG & Cuntry. …But, it would be another 10 years before those human constructs would fully become threadbare liabilities for me.

Two and a half years later, with a diploma, military officer’s commission, carnal knowledge, and wicked tendencies, I set forth for San Diego, CA in a brand new 1984 Pontiac Fiero—the largest “asset” I’d ever acquired by a factor of 10. Everything still fit in the car, and it was far smaller than the Mazda I got $500 for in trade.

I somehow made it with no significant assets, and when my initial courses in a plethora of ship systems and personnel management came to a close six months later, movers showed up to the bachelor officer’s quarters to pack all of my assets I couldn’t take on a 747 to Manilla, P.I., destined instead for my eventual home in Hayama, Japan. they fit in a box about the size of the far back end of a wagon, reminiscent of that first cross-country voyage.

Now having a regular paycheck, plus tax-free cost of living allowance (COLA), I spent most of it on complete debauchery; from Olongapo City, PI, to Pusan, Korea, to Pattaya Beach, Thailand, and others. The rest? I wasted that on accumulating assets for my 2-story house on Morito Beach.

By the time I moved out in 1989—nearly 5 years and two tours of duty later—my assets had grown from a 3x3x3 box to a 20′ ship container. Amongst them were all manner of standard furniture, an impressive Onkyo and Nakamichi stereo system that drove two massive Klipschorn speakers, a 1,000 cc Honda crotch rocket, and all manner of artsy nicknacks from all exotic Westpac regions. Destination: Monterey, CA.

While attending the six-month French course at the Defense Language Institute for my next job as an exchange officer to the French navy, I managed to stay relatively asset neutral, merely selling the motorcycle and buying a Corvette. All of that got shipped to Toulon, France.

Then, I got my first true lesson in assets vs. liabilities. I was standing the 16-1800 “dog watch” as officer of the deck of the FNS COLBERT, in station a couple of nautical miles behind the CLEMENCEAU, North Arabian Sea, and the messenger of the watch delivered a communique from my shack-up French girlfriend that in the days before email, read like a telegram. She’d found the keys to my car I’d hidden and got herself in an accident in college & party town, Aix-en-Provence, the night before. The final sentence read: “gros dégâts.”

In the end, I longed for the car-care-free five years in Japan where I owned three used cars bought off guys leaving, never paid more than $1,200 for any of them, and sold each eventually for similar. So I replaced the Corvette—once the insurance company paid me off and I sold the hulk to an exotic car shop for $5,000 cash—with an old, used Austin Mini GT for $2,000, which served me well for the rest of the stint.

I hadn’t even begun to collect assets.

…When I left the navy in 1992 and returned to the U.S., settling where my parents lived, in San Jose, CA, my goal was to start a business. I was determined to do something and after a coupla failed tries, and about $50,000 in excess “tuition,” I got it right. Over the next few years, I managed to build something that generated paychecks for about 30 people, and serviced some particular needs for about 2,000 clients.

It began a process of distinction. There’s assets, then there’s ASSETS. Perhaps that’s why, when you take an accounting course, they call them financial assets or, capital. It’s funny when you think about it. Here I owned a house full of assets the navy had literally shipped around the world and that cost perhaps upwards of $100,000 retail…yet that x386 PC clone computer I bought for about $2,000 at Costco made it possible to generate $250,000 in fees from a spare bedroom in 1994.

After going on to grow the thing to the point where I had to pay lawyers $250,000 per year to deal with State Attorneys General, I closed it down burnt down the house a few years ago.

I reflected a good long while on what was an asset vs. what was really a liability and at that point, I couldn’t help but think there was little opportunity for people like me who really don’t care for venture capital or other means of equity investment such that one gets to become a usual whore. Matters not whether you’re a commie or fascist (democrat or republican, but I repeat myself). Lots of money is all that matters and “consumer protection” is but a ruse to steal it from you, unless you can dance. …Or want to, and I did not.

…I became an expat a couple of months ago. Got up and moved to Mexico. Everything I needed to bring down fit in the back of my car. My wife, Beatrice, who supports what I’m up to but is not quite ready to retire from a teaching career of 33 years too far, supports me enthusiastically and has just secured a new and smaller place with big property for her and the dogs. They used to be two, but now are three, with the addition of a new rescue, Choncho, to the right, who joins Scout (AKA “Butt Hole,” center) and Nanuka (“Nuke”). 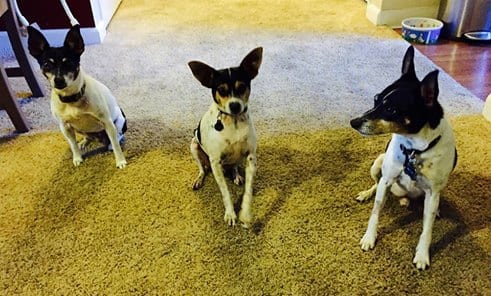 Now, in case you think rat terriers are prissy little worthless muffins of fluff, I beg to differ. Here’s Nuke mixing it up with a male herding dog at one of the hang glider sites I fly.

When I reflect on it, I can’t help but critique myself on a serious misplacement of what assets truly are vs. liabilities. I’ve been lafing at the video of Nuke and Spot for the three years since I recorded it. Asset. Check. Took it with a phone. Asset. Check. It was on a camping and flying trip with family. Asset. Check. But, we began that annual excursion 16 years ago and the first year we had tents, sleeping bags, coolers, and camp stoves. Now, everyone has spent tens of thousands on multiple trailer trades, vehicle trades, and gear such that now, it’s a 5th-wheel village.

Such is the alluring, tyrannical ways of assets. At least Beatrice is solidly on board. For the new small rental place with enormous yard for the loved ones, she’s getting rid of most of our stuff. She emailed today and I gave her a very short list, mostly keepsakes. Sell everything else, because I care no longer to be a steward of stuff.

And now, I have even more to think about. Check this out:

It’s about a guy who lives a nomadic life as the head of a company he founded.

I’ve been living this nomadic lifestyle for a little less than two years now. During that time I’ve traveled to 25 countries. I’ve motorbiked through islands in Thailand and the Philippines, hiked an active volcano in Indonesia, learned how to surf, gotten my deep-sea diver’s license in the Gili Islands, explored new cultures and met dozens of wonderful people.

All through this time, my only possessions have fit into a small backpack. (Incidentally, it’s the same backpack that I used to carry to school back in the day).

I find that in about 6 weeks here in Los Zacatitos at the tip of Baja Sur, nearly half of what I brought in the back of the Baja Beemer, I don’t need because I never use it. I might even sell the Baja Beemer.

Since all my income is now derived via an internet connection employing a few different streams that in total probably require an hour or two per day, on average, I’m looking to have a small duffel of clothing and my office in a backpack (MacBook Air, iPad Mini, iPhone 6, Kindle, chargers & cables, and a notebook and pen).

I think it’s time to plan out a nomadic life, because the only thing I truly want to do every morning when I get up is to contemplate what I want to write about and publish that day…pretty much like I’ve been doing for 12 years.

The difference is that now I have no “assets” to pay for monthly and forever.