Looking down at the rat maze…scurrying for cheese…

The events and circumstances leading up to this are a story for another day. Shortly after returning from off-grid living in Mexico for two months, Beatrice was presented with an opportunity to look after a 5-acre property in the east hills of San Jose, 3 miles from her work for some period of time that could be a year or more. There are no services: electricity, water, waste, gas, or internet.

So I rented a ~30′ self-contained trailer and proceeded to sort electrical. 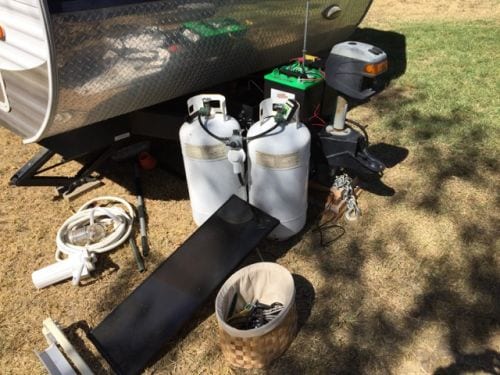 Rather than do a bunch of calculations to estimate needs, I’m working it from both ends. First, conservation. Use as few lights as possible, and if an LED flashlight will work, use that. Minimize water usage, both in terms of the water itself, and electricity for the pump. Also, I have a bunch of LED 12-volt RV bulbs arriving today to switch all those out from incandescent.

On the supply side, I began with two Interstate, deep cycle 6-volt golf-cart batteries (steep at $360 for the two) wired in series to produce 230 amp hours @ 12 volts DC. I also added a 400 watt AC inverter inside to power things like a coffee grinder for the French Press (nope, no coffee maker @ 700+ watts) and eventually, radio internet (like I had in Mexico) and a WiFi router, that run about 1 amp each @120 volts AC.

The solar panel is a Nature Power 18-Watt deal, with 8-Amp Charge Controller, but, I’m not getting to full charge by the late sunny afternoon, so I’ve got another one on order to double charging capacity (the controller can handle up to 4 panels). In the end, I may have to go with 2 more batteries wired in parallel in oder to double the capacity, and just pop for a standard 200 watt rooftop panel. We’ll see. 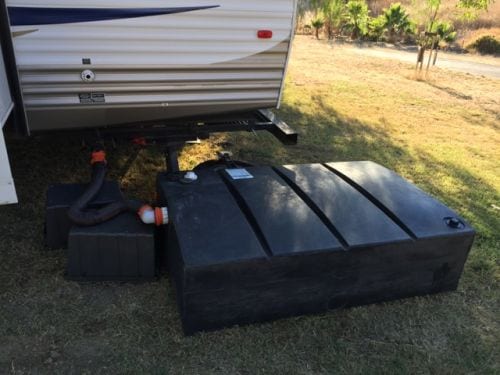 They’ll also come and dump it when needed. In terms of gas, that’s two 10-gallon tanks in the photo above that I take down to get filled a few miles away and the propane supplies the stove, oven, refrigerator, and hot water heater (yea, hot showers!). Water is via an enormous tank up the hill, gravity feed, so I can fill the potable water tank of the trailer.

The last thing to sort is Internet. I picked Ridge Wireless, due primarily to the absolutely 100% stellar reviews on Yelp (a very tough thing to accomplish). The guy showed up on time for a site survey, it’s doable, and all I need to do is sink a 6′ fence pole to mount the dish. Install in about a week. Haven’t decided yet whether to go with the 2.5mbps for $50 or 5 for $100. We’ll see.

In all, cost is coming in at about $700-$750 to live like this in one of the highest cost of living areas in the country.

The dogs love it too. Since last Sunday morning when we departed the apartment for the last time, the dogs haven’t been attached to a leash for a second, and they sleep well at night, having spent all available energy during the day.