“To Serve And Protect” Update: Firemen, Forrest Rangers, Paramedics. The Police Do Disservice, and Brutality.

I won’t yet talk details, because of info and sensitivities I’m not at liberty to publish, but what I can tell you is that I’ve had lots of interactions with firefighters lately; and I use that term rather than “firemen,” or “fireperson,” because mostly important: it’s perfectly descriptive and doesn’t come with gender baggage to bunch the panties of silly people who’re as ubiquitous, now, as were Dead People in The Sixth Sense.

So there was a big fire. In the aftermath, I’ve had the joy of interacting with a few firefighter groups who came back to the scene of the destruction for self-schooling, lessons, learned, etc. It was a large conflagration, exacerbated by a problem of water supply. Anyways, not to divulge further details before I’m in rights to do so, the point is that these folks are consummate To Serve and Protect professionals, and nobody has any qualms about that.

I was even able to go into my Richard, baiting-for-conversation mode with them:

“Well, all I saw was fit and lean men doing their jobs.”

…”Only fit and lean men?” asked the 6′ 2″ lean and Amazonian-fit black woman as she rested her bent elbow on the shoulder of a 5′ 10′ guy, about my composition—and the other guys were similar.

“I’ll bet you can kick all their asses in the PT,” I asserted, with a grin.

All the guys laughed, looked my way, and nodded.

Thing is, all “serve and protect” functions are not equal. You don’t get to fake fighting a fire, or the knowledge and physical abilities necessary to do so (anyone recall the BrewHa over fat women insisting to be firefighters?). You fight it competently or it consumes more life and property than it should otherwise. Same for the forrest. Purveyors of Usual Platitudes go home. Competent people have real serve and protect jobs to do, there. …Take it to the quotidien Campus, where you’ll find an endless supply of the proto-Fucktarded: mush; euphemistically called brains, or if being generous, in formation.

People often conflate my anarchism with a crazy notion that everything a state does ought be defiled. No sirs and ma’ams. Only the stuff that comes with force-backed authority, that’s not in any rational context (a firefighter preventing someone—by force—entering a burning building is a humane use of initiatory force…while not being immoral to let them anyway…which is a good litmus test) gets my scorn. People have demonstrated over eons that they’ll gladly embrace a division of labor where they get to trade the values they produce for the values someone else produces…or use a medium of exchange we commonly call money.

But, we live in a world where everyone wants to live at the expense of everyone else, everyone wants guarantees, everyone wants a “retirement” (the stupidest concept of all time: take a 9mm to your head; write a note: “I’m retired”), everyone wants their panties and tighty-whities fitting perfectly, and everyone agitates politically and votes to have other people impose—by force of guns, jails, fines, seizures, detainment, and regulations farther up the ass than you can get a colonoscope—their tender feelings and opinions and preferences on everyone else and their claim to “moral” authority is that they’re “taxpayers,” which in reality is euphemism for “they steal from me, so steal from others and get me goodies I like in partial repayment.”

What a lame world of automatic, reactionary people I live in. I’d prefer thinking people who are just wrong but because they think, might be open to persuasion. Nobody is open to persuasion, anymore, and it’s a sign of hyper-politicization of virtually everything, now, and on international and geopolitical scales.

Here’s what set off this post, something I saw on Facebook this morning and of course, had been Liked and Shared by all the Usual Fucktards you usually always see every single day…scrolling through life, looking only for what adjusts panties properly. 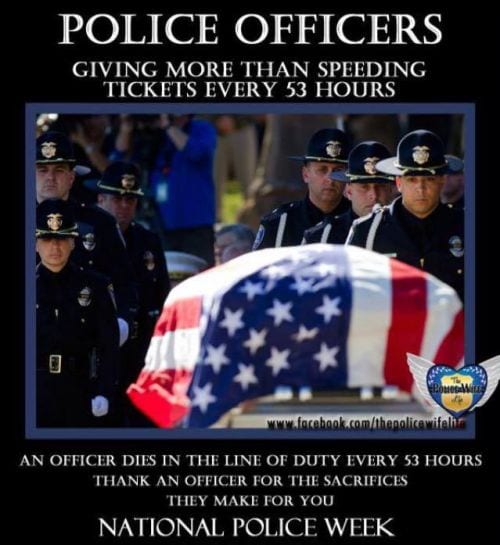 Here’s what I wrote off the cuff on Facebook.

When seconds count, the police are only minutes away, update.

The other update is that getting killed meddling in people’s voluntary affairs with guns and threats of detainment and incarceration ought to get you killed. Most police deaths are actually a good thing because few are killed actually serving and protecting–like firemen get killed over and are truly deserving of respect–but because they stick their guns, clubs, jails, and citations in other people’s peaceful affairs.

Smart people disregard uniforms, badges, facy painted cars, GI Joe Fashions, marble columns, flowing robes, and edifice of all manner and instead look to the human-on-human morality of the act. That’s what smart people do.

Fucktards do their same pawn & cog routine, always, because they have never developed an ability to think and judge for themselves.

My brother, Stacy, pointed out that not only are the figures off by wide margin, but are half of what they were in 1974.

There were 126 Police officer deaths in 2014, that’s one about every 70 hours, not 53, pretty simple math… 8,760 hrs in a year / 126. By the way that number is less than half of what is was in 1974. 45% of the 126 are gun related the rest are traffic accidents or other causes. The point being that is not nearly as dangerous of a profession as the media and politicians (and of course the PD) would like every to believe.

Yea, it’s long been pointed out to Unsual Fucktards, to no avail, that more than half of police officer deaths are routine shit we all get caught up in…but it’s always tagged as “In The Line of Duty”…which You Fucktars keep sucking up and clicking Like on, because you’re so pathetically stupid and non-critical—so they’ll just keep lying to you because what you love more than anything else in your lives is to be told lies from others with a message you agree with. It’s probably the chief occupation of humans now: lie hunting.