Other than this mussels & clams dish at a benefit dinner for a dear friend Saturday evening in Saratoga, CA, life has been tough. 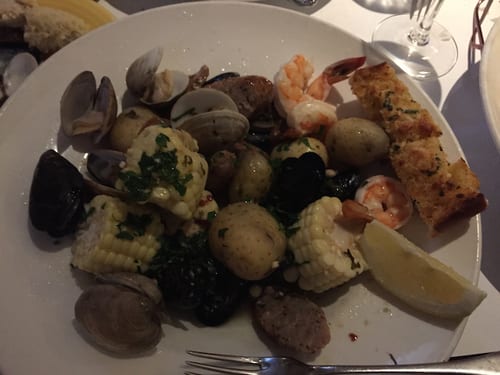 We’re literally living in a trailer on 5 acres in the east hills, caretakers of a property with assets for the taking that require guarding; and it was only because of my experience with no power pole to the house in Mexico that I said: “yea, fuck yea; let’s do it, I can do it. It’ll be fun.”

Our three rat terriers haven’t had a leash clipped to them in over a month. They roam completely free on 5 acres. Come and go as they please. It’s perhaps my primary joy in all of this, watching them develop into true dogs, well adjusted. They know home.

But for now, it’s really damn hot, and the flies are a challenge unlike ever faced before, including camping trips where the site is next to a field of cattle.

Yes, I have experience with all the passive devices & traps, but why not enhance your one-hand-shot marksman skills at the same time?

Ive killed a few thousand of them in the last week, and there simply is no sorrow. No, actually, I quite enjoy when it nicks them only enough so they can still writhe, but not fly.

Seriously, get a BUG-A-SALT 2.0 and explore your darker side.

In other news, I added a 32″ LED smart TV to the off-grid mix (things like Netflix, Hulu, Amazon, and YouTube are built right in). Here’s a quick little vid. That’s all battery / solar, running through a 400 watt inverter: TV, Internet, WiFi, and with enough left to charge two iPhones, two iPads, and two computers—plus run the coffee grinder.

…On last Sunday afternoon I was sitting outside, at the table—head down in some iPad whatever, when I was alerted to a 6′ 2″ Jamaican accent yelling at the four dogs and trying to kick them (a Beagle hound came with the property—Hunter, who chases off coyotes every day, and sleeps in the trailer with us every night with ears properly situated).

I understood immediately: entitlement. You see it on the Internet every minute of every day, but it’s quite something to know that there exists flesh & blood that behave in such a 7th-grade girl manner. This was not going to be obvious; but, it would absolutely go my way.

That’s the only deal I offer in such circumstances. And it might require a firearm.

The dogs were doing exactly what they have been hired for…fed, pampered and given way too much bedspace to: tirelessly alert to anyone on the property, no exceptions, no equivocations. They are stellar and ever vigilant at it, but I must give credit to Nuke (“Nanuka,” but I call her Nuke) the most. In fact, I think she and Hunter have a Division of Labor thing going on, where she fiercely guards the common property where human comings and goings take place, and Hunter patrols the father grounds with Big Barking all the way, to make sure the new litter of screaming and howling coyotes don’t get any stupid ideas.

All I have to do is make critical distinctions for them as concerns the deer who drop by now & then. …And the belligerent human.

…Had to get the gun. The guy demonstrated his unwillingness to respect a property boundary and when educated, got uppity about it. Refused to leave, though invited numerous times.

I chose to show him my grandmother’s Ruger .38 revolver—that was on her bedside table as far back as I can remember. I didn’t point it at him, just made him aware that I have it, leaving it an open question whether I know what to do with it.

Took Beatrice and I a good 45 minutes to get him to leave, no pointing a gun required, which I believe is an important aspect. Once you have a gun in hand, it surely ought to be enough in most cases, dealing with unarmed people, to advance the critical point.

Juxtapose that with how the military police—but I repeat myself—conduct their affairs.

…We later learned that the property owner had to chase the same guy off at 11PM, 4 months ago, with a cocked Glock 9mm pointed at his head.