…Interesting that the very two first French films I ever watched were Jean de Florette and Manon de Source… Look ’em up.

I’ve made much of working electricity, via the S[o]n. Here’s the quick vid I did of that yesterday,  no editing,:

Solar music. What you see on the controller, in succession, is battery voltage, charge input in amps, and load outgo in amps…so even though I’m using, all is sun power and 3-4 amps to spare going into the battery for tonight, just in case we want to watch Netflix, HBO or something, on the free energy stored.

But I got a question, via Beatrice, from a smart friend. How can we have water if we have no electricity and there’s no city service (there are wells, but pumps require power)?

So, let me water you down. 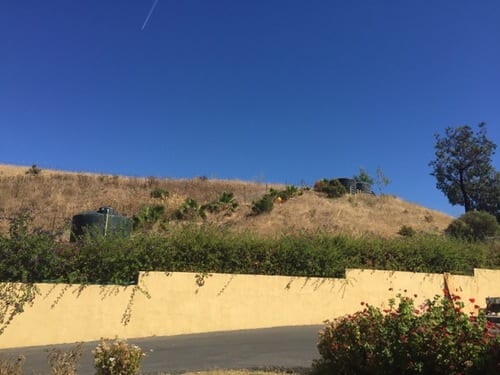 Just another note about off-grid living.

In Mexico, I had two tanks, 10,000 liters, $65 per delivery (and had to use an RV-like pressure sensitive pump—that eats amps—to deliver it to spigots, and shit depositories.
Here, in the east hills of San Jose, there’s no need for that. There are numerous wells on the property. But, because we have no electricity, what to do?

Well, first, there’s huge storage. Tens of thousands of gallons. Those three tanks you see in the photo are just about 22,500 gallons of it.

But, that lower tank—and this is the cool part—is fed from a natural spring on the property that produces 200-500 gallons per day. When you see that lower tank spilling water from the top, you go up and werk 2 valves, and water gets diverted to the upper tanks, and the spring pressure is good enough to send it upstairs.

How fucking cool is that?

And, as luck would have it, our RV water supply comes from those upper tanks, complete gravity feed, so I don’t have to use electricity to pump an ounce of water.

How bountiful, our host, if you take the time to get obsessed about it.

You better unsubscribe from all my stuff instanter. If you’re not careful, you’ll quit your Gucci-shoe and Armani-suit job and go just fuck off, and learn how to live.