Juxtaposing the “Liberal” Left and the “Conservative” Right: In My Way

A couple of meanderings, today, shot over the bow of my Facebook page.

First was this piece by Jeffrey Tucker of Libery.me, via his Beautiful Anarchy page: Has Donald Trump Unleashed the Neo-Nazis?

I am daily taken aback at the abject ignorance of history in this country and the circumstances that gave rise to National Socialism (“Nazi,” for short) in Europe, in the 1930’s. Just like east meets west, the political right eventually meets the political left, just with different styles. Here’s a quote from the article.

It’s time libertarians get serious about realizing that there exists such a thing as Brown-shirted socialism. It masquerades as patriotism. It seeks national greatness. It celebrates the majority race and dehumanizes the other. It is violently protectionist. On cultural matters, it is anti-leftist (“politically incorrect”). It is unapologetically authoritarian.

Even given all this, we are mostly mystified by it. It doesn’t strike us as a coherent ideology. It seems like a string of bad policy ideas (and some not terrible ones too) rather than a real political tradition. This is because we, as libertarians, are well-schooled to fear the socialist left but have little preparation to understand the threat from the other side.

Events of the last weeks should heighten our consciousness. There really is a brown-shirt movement in the U.S. It’s been building for many years. They have their organizations, books, websites, and splits within splits. The neo-Nazis are the most extreme variant. But fascism has many other types of expression, each reflecting a special interest, but each of them leading to a special kind of authoritarianism. 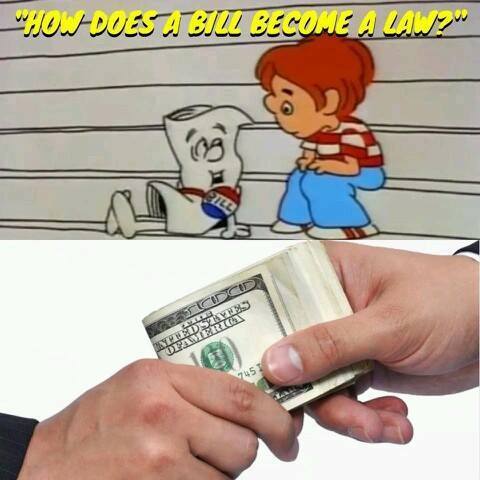 You might recognize that as some public education cartoon out of the 50s or 60s, when it was called civics, not social studies…but I digress.

Consider the left’s view of the legislative process.

It’s basically the corporations (and, importantly, trade associations for small businesses—equivalent to labor unions, but for small business) buying the laws they want, either to help them do something customers and plain folk might be outraged over (such as laying waste to vast swaths of planet earth environment), even violently (so they get state protection), or, to help them by erecting artificial barriers to entry for less capitalized competition—running the gamut from licensing for hairdressers, to registering as an offer of security, to drilling rights, eminent domain, and a million things in-between.

The left’s solution? Elect politicians who lie and pretend that they aren’t just as endemic to that process as any old Republican. And in fact, there are arguably more republicans who steer clear of the “Johns” than Democrats.

What it really turns on is ideology. The left is so shallow that they see a BIG difference, in this context, between a guy like Steve Jobs (good) and Bill Gates (bad). And there are a million examples.

I give the right some credit in that they see that the essential nature of job creation lies in as few barriers to entry as possible, and as few favors and regulatory obstacles as possible. The left—not understanding economics a god damn wit (the intelligentsia do, so did Marx)—sees brute force, policy, regulations, etc., as the only solution to get everyone IDEOLOGICALLY right. Fundamentally, the left insists you think like they do; whereas, the right wants you too, but trade trumps it.

Since the October Revolution in 1917, the left has never stopped believing that they can engineer social revolution, which is to say, get everyone to think like everyone else, under some banner of self sacrifice in one way or another. The catechism will be decided by law & statute, with the sales pitch being that it’s democratic. The right just wants you to be saved and go to heaven, and that’s easily dismissible.

Alright, that’s it for the day. FCLO post is done, but I’m not going to put it up until after the long weekend.