The State of the [Labor] Union

In the 21st century the most prominent unions are among public sector employees such as city employees, government workers, teachers and police. Members of unions are disproportionately older, male, and residents of the Northeast, the Midwest, and California.[4] Union workers average 10-30% higher pay than non-union in the United States after controlling for individual, job, and labor market characteristics.[5] (Wikipedia) 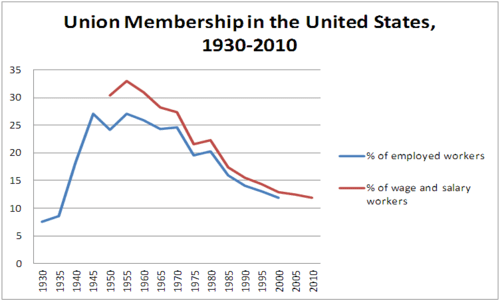 So, OK, a day off over something that affects 1 in 10 people in the US is as good a reason to take a day as any, I guess. Really, the only real news concerning organized labor since the 50s is the steady decline of private sector membership, and the rise of public sector.

Mind you, I’m no more opposed on principle grounds to employees organizing in solidarity, one with another, for collective bargaining than I am for individuals and companies to pool capital in order to better their perceived chances. So long as it’s all voluntary, all the way around, have at it (of course, the reality is far from that, but I’m talking in principles, per se).

That does not apply to public sector unions, however; which are, ironically, very non-democratic qua institution (in terms of democratic regimes). My objection is more one of state monopoly than it is in the way the monopoly organizes its affairs, however. I’m just pointing out the contradictory nature of public unions vis-a-vis the stated democratic principles of said institution.

For two decent critiques of public sector labor-organization—as distinct from private-sector organization—see Bainbridge and Disalvo. You might be surprised to learn that public-sector organization was widely opposed by Democrats, including pro-labor FDR. They used words like “unthinkable.”

Otherwise, enjoy the BBQ and beer, or adult beverage of choice. Consider that what we really ought be celebrating is Division of Labor Day; and in that vein, raise a toast to cooks and bartenders as you’re enjoying the fruits of your labor—”organized” or otherwise—by means of outside grilling and drinking.