Just quick and just for fun.

In the space of a couple of hours, doubled my power capacity just today, as the sun gets lower and the days grown shorter—even though, this is, after all, California. 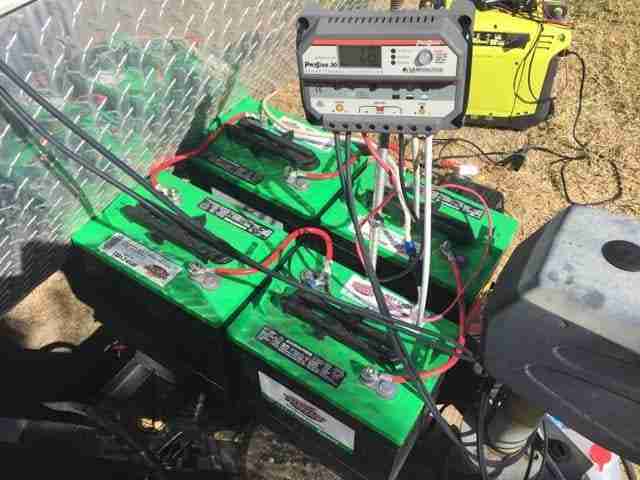 The electricians, engineers, smart DIY folks, etc., will immediately recognize that as a 4, 6v deep cycle wet cell battery super-cell, wired in both series and parallel to produce 12 volts and also—most importantly—a doubling of capacity—from 230 amp hours to 460. …The rest are voting for Bernie Sanders—unless they’re union electricians who do know; in which case, free stuff is always the guiding principle because they work so hard and they deserve it.

Yea, there were only two before, but I found myself obsessively checking voltage and missing stuff on TV. With the best internet service ever, that takes but an amp, WiFi, and a 32″ Smart LCD, we’ve got Hulu (no ads version), Amazon, Netflix and HBO now. Fuck live sports. Really. Fuck those idiots if they can’t figure out how to create a pay service that doesn’t involve a fucing municipal monopoly on cable or…crazy hilarious, SATELLITE. …That a company serving up programing via satellite would model the business exactly like those having cables strung all over is a testament to how fucking stupid municipalities and consumers are.

The first Dish company should have been founded by the guy who founded Uber. Yes, don’t bother in comments, please. I fully understand how very stupid and intransigent the entertainment industry is with its dinosaur legacy contracts that work for them for now.

…Anyway, went off on a little tangent there ’cause giddy. Really loving this. Here’s what I reported on Facebook:

With 430 amp hours, at an average draw over 24 hours of 3.5 amps, we can weather a 2-3 day storm with little solar charging, and still watch a couple hours of TV at night and keep the laptops and devices charged.

Keep it up without blue pills out there, everyone.