Iron Fortification, Disease, and Obesity: An Update with Data Refinements 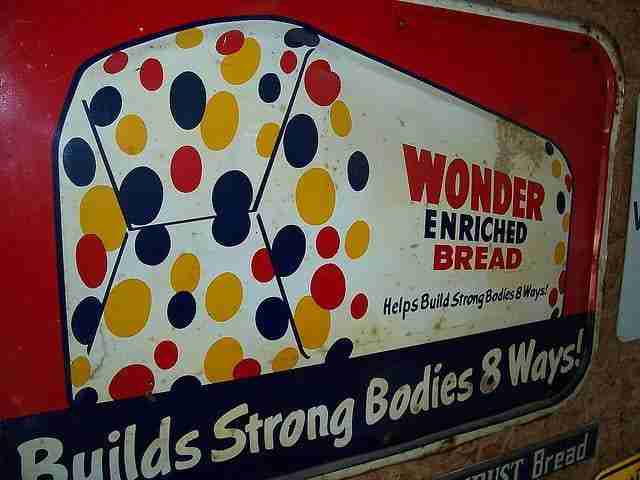 Why does fortified food so strongly correlate with poor health and obesity in developed countries? After our 6,000 word post hashing out the possibilities, we thought it was time to simplify the message. Quite simply it’s because fortification promotes an imbalance of micronutrients that would otherwise not happen when consuming a diet of whole foods. It is a government policy that does far more harm in developed nations than good.

We’ve managed to boil this concept down to a short Tweet-worthy 6-minute read (1,400 words) in a recent article Richard posted on Medium.com, Did Food Enrichment Cause The Obesity Epidemic? It’s an abridged version of our 6,000 word post on the subject, Iron, Food Enrichment and The Theory of Everything (with over 2,000 shares—keep it going) and follow-up post, How Wheat Went From Superfood To Liability.

The Timing of Fortification Increases

When we were researching our Iron Theory article, we demonstrated the drastic rise in iron intakes with this chart: 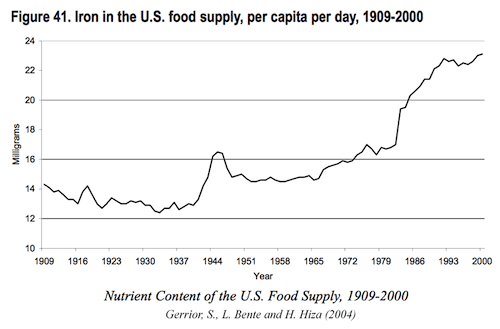 However, we came across references to FDA hearings and media articles such as this one where the FDA was criticized for raising iron levels up to 40mg per pound of flour during the early-to-mid-1970s—at the tail end of the Nixon administration, and pushed through by Senator George McGovern. 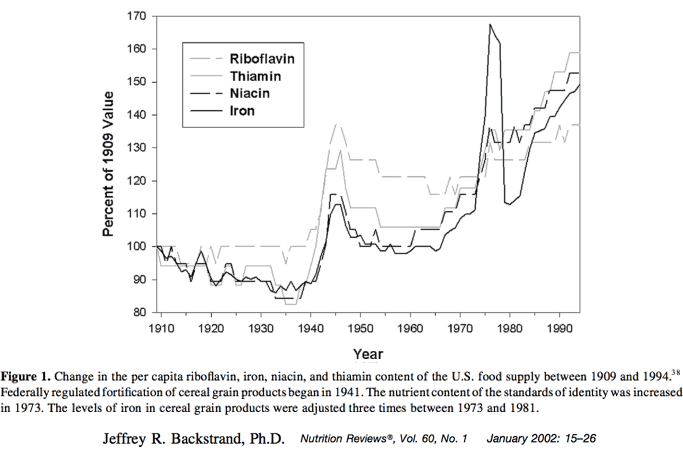 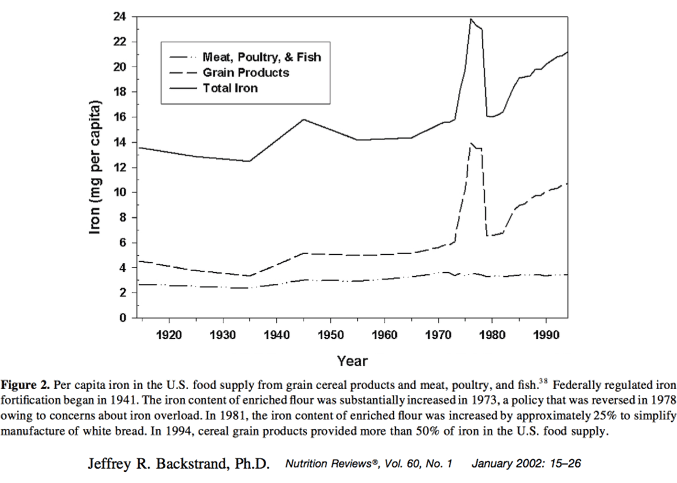 As you can see, we the people are lab rats in a nation-wide experiment. Fortification certainly didn’t making us healthier than non-fortified countries. No, the opposite actually happened. It appears to be harming us by exacerbating a micronutrient imbalance and promoting pathogenic gut profiles, even at low doses.

The timing of these charts appears to explain why one study estimated that there is a ten-year lag from fortification increases to increased incidence of obesity.

A Clarification on “Mandated” Fortification

While the UK and Canada do require certain products to be fortified, the FDA does not actually “mandate” fortification, but rather strongly suggests that manufacturers fortify products, and the FDA publishes “guiding principles” for the levels and labeling of fortified products. However, it is unclear (to us) if states that passed the Newfoundland Law do still in fact require fortification in certain products. Nevertheless, enriched food is ubiquitous in the American diet. However, this may be good news for Americans as consumers will have the option to demand non-fortified products if the word gets out and people realize that their health improves by avoiding fortified foods. Fortification costs money, and manufacturers will gladly eliminate the costs of fortification if consumers want to avoid it. All it takes is for Americans to become aware of the problems with fortification. You can help by spreading the word via the share links at the bottom of the post. Far & Wide, if you please.

Traditionally, many scientists and health gurus have pointed out that refined oils—like those from soy that are high in linoleic acid (LA)—a polyunsaturated omega-6 fatty acid—have been linked to obesity epidemic. We believe this fits perfectly into the exacerbation of micronutrient imbalances found in obesity. We found evidence that a diet high in refined oils might just make you absorb lots of iron, which in excess can promote oxidative stress in organs and tissues. The following chart from this article shows the trend. 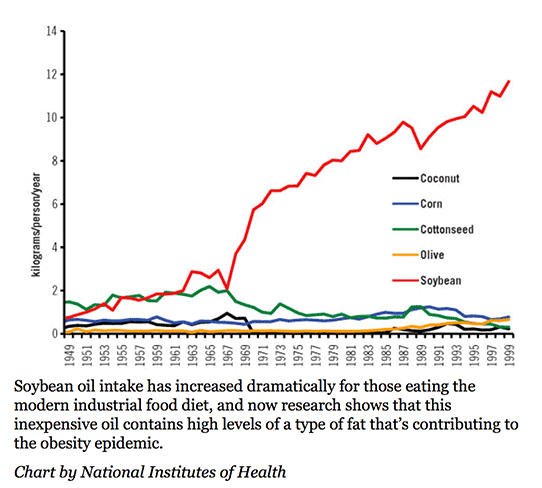 Obese people have iron deposits in their brains, and iron deposits in their adipocytes, but they can appear to be anemic. Curiously, researchers don’t know why populations with the highest iron intakes have the most obesity, the most metabolic issues, as well as disruptions of iron homeostasis that come with those chronic diseases. But, with the help of Dr. Jane Karlsson, PhD—who has spent over 30 years reading biomedical literature, full time—we are working on a plausible and testable mechanism that we hope to reveal soon. The end result is that the pieces of the biological mystery are neatly fitting together, as you would expect from a jigsaw puzzle that is nearing completion. All of the pieces are falling right into place.

What does this mean? It means the biology as a whole fits together—just as you’d expect. But not as the molecular biologists of 30 years ago expected. They thought Richard Dawkins was right and biology was messy, because of evolution. You could see the mess everywhere, in epidemics of degenerative disease which were, they thought, due to faulty genes. Biotech and the human genome project was advertised as the technology that would save humanity.

Actually, this idea that genes were mainly responsible for modern disease had actually been tested, and shown to be incorrect. Nearly 100 years ago, Sir Robert McCarrison, lectured before the Royal College of Surgeons on the spectacularly healthy Hunza in northern India (now Pakistan), and did experiments on rats to find out whether their health was due to their diet. In his experiments, rats on a Hunza diet were just as healthy as the Hunza—free of all modern illnesses. Whereas, rats that consumed a refined and modern Western diet became sick and diseased.

McCarrison’s findings were echoed by Dr. Weston A. Price (1870—1948), a dentist who found that, regardless of macronutrient intake, healthy traditional cultures avoided degenerative diseases by eating wide variety of whole foods and became sick and diseased on refined foods. And it was further explained by Dr. William A. Albrecht, PhD (1888—1974)—the Father of Modern Soil Science— who established the concept that it takes a universal balance of minerals in soil to have healthy plants, and healthy plants to have healthy animals (or people).

Quite literally, the unifying principle between these great thinkers is that it’s the refinement and unbalanced consumption of micronutrients that promote many modern diseases. Perhaps this isn’t all that surprising, since all metabolic cycles depend on a similar balance of these micronutrients. Stay tuned.

Weight Loss Was Easier 30 Years Ago

The evidence correlating fortification and obesity continues to pile up. Recently The Atlantic published an article on a recent paper on “Why It Was Easier to Be Skinny in the 1980s.” It really isn’t the best article, but it explains that people didn’t need to exercise as much back then to lose weight. Nobody knows why. The authors hypothesize on the many factors that could explain this paradox, but the scientists they interviewed completely missed fortification as a possible reason. Prescription drug abuse and antibiotics are offered as a reason, but the authors did not realize that the drug/obesity theory is easily debunked by populations like France. France has the highest level of prescription drug abuse in the world, and is addicted to antibiotics, yet it has one of the lowest obesity rates of any developed nation.

No one seems to notice that fortification is the one variable that can explain virtually every paradox. We believe fortified individuals are now far more saturated with a mineral imbalance that is now much harder to reverse than it was 30 years ago.

Finally, we thought we would mention an old story that is relevant to all this. In 2011, it was reported that gorillas at zoos were succumbing to human diseases like heart disease. Nobody could figure out why, especially considering that gorillas were eating a fortified diet that gave lots of the nutrients they needed. The researchers believed that the heart disease could be stopped by switching captive gorillas back to their natural diets in the wild. A surprising thing happened:

“Going back to this natural diet has changed gorilla behavior. Before, gorillas only ate during a quarter of their day because the food was so packed with nutrients. Now at Cleveland, they spend 50-60 percent of their day eating which is the same amount as in the wild. With all this extra eating, the gorillas have doubled their caloric intake, yet at the same time have dropped 65 pounds each. This brings their weight more in line with their wild relatives.”

Yes, the fortified zoo biscuits were promoting chronic disease and weight gain in the animals. Once zookeepers replaced their biscuits with whole plants, the gorillas regained their health and stopped a lot of behaviors associated with captivity (pulling hair out, aggression, etc). It’s yet another nail in the coffin of fortified foods.

While we continue to outline the mechanism between micronutrient imbalance and obesity, please take a moment to Tweet and Like the condensed and abridged article on Medium.com.