My what a ride it’s been. Remember, Nov, 2012? Actually, I’m quite sure it was in comments on previous posts where Tim—who now has his own Vegetable Pharm—introduced the idea of bouts of eating potatoes only in comments. …And since he was doing it only in comments, I took it to posts; and he figured, what if you eat only potatoes, too, and we write about it not only in comments?

Here was the first post, and if you look only at comments, Tim pretty much pushes everyone out of the way from there out, eventually introducing resistant starch. Rest is history.

There was some pretty cool work along the way if you care to peruse the posts; even a great collaboration Tim did with another commenter in terms of glucose regulation eating only potatoes. But there was always one problem for me, and it’s that I couldn’t find a way of eating potatoes almost exclusively that achieved staple status, while not blowing my brains out.

I stumbled onto it—for me—by needing to get a gas grill. We sold our rather medium sized, stainless steel a couple of years ago when deciding to move into an apartment near Bea’s work that didn’t allow grills on the patio. More recently, living off-grid in an RV in the east hills even closer to Bea’s work, we decided to get another. But I wanted small. It’s the whole off-grid conservationist thing: by choice—not ideology or force you. Having experience in living 100% on solar with no backup for 2 months in Mexico, I became interested in how much one can do with less; not from necessity, but love of the challenge. Now we’re nearing 3 months here and I’ve used 3 gallons of generator gas, and 3/4 of that was while waiting for my full solar system to arrive and get set up.

So, this is the gas grill I chose for it’s small size, hence heat up the whole space quick (and I’ve done a whole chicken in it): Weber Q1200 Propane Grill. They come in different colors. Bea emphatically wanted black. I wanted purple, of course; and since she dropped the cash—since she wants me to cook for her—we got purple.

First thing I cooked was some thin ribeyes on high heat (for me, thin is best with ribeye, or entrecôte). Well, that was the main dish. I got this crazy idea, and so here was the result, right before putting the steaks on for 2.5 minutes (1 minute 45 on one side, 45 seconds on the other). 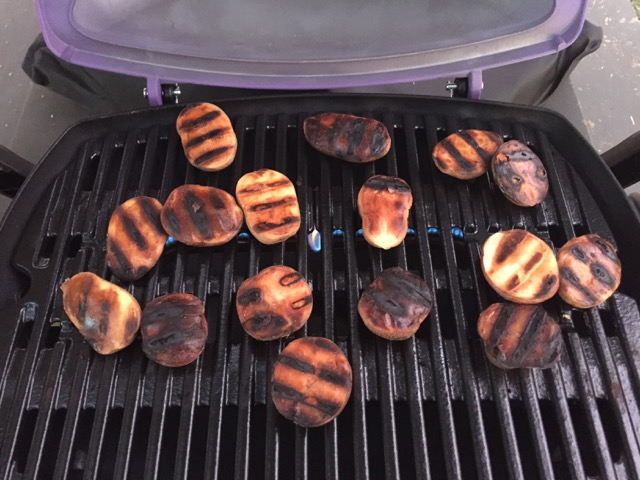 Preheat high. Cut small taters in half, place flesh down with nothing added for 15-20 minutes covered, medium heat.

That meal worked out fine, along with a beef stock reduction of a quart to a half cup. 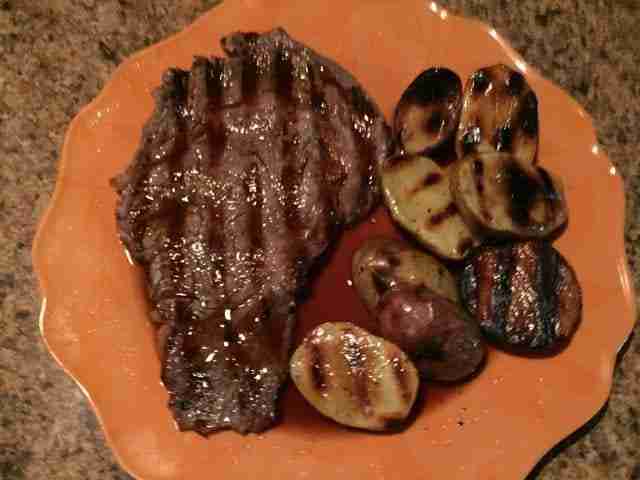 Don’t let them fool you. A 1/2″ ribeye on high heat, 1-2 minutes on one side, 1/2 – 1 minute on the other (both covered) is a superior way to experience that cut. Save the thick cuts for filets and cook them like seared ahi.

Thing is, I had leftover potato halves, so I tossed them in a ziplock. 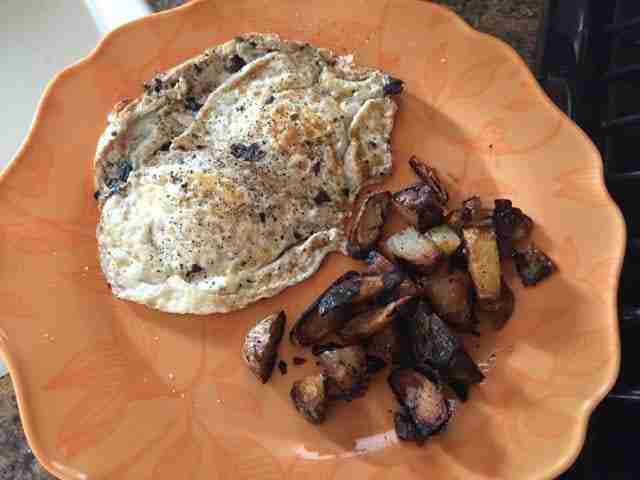 Dice ’em right out of the fridge, and that takes about 3 minutes in butter to go along with however you like your eggs.

How about with some all beef hotdogs? 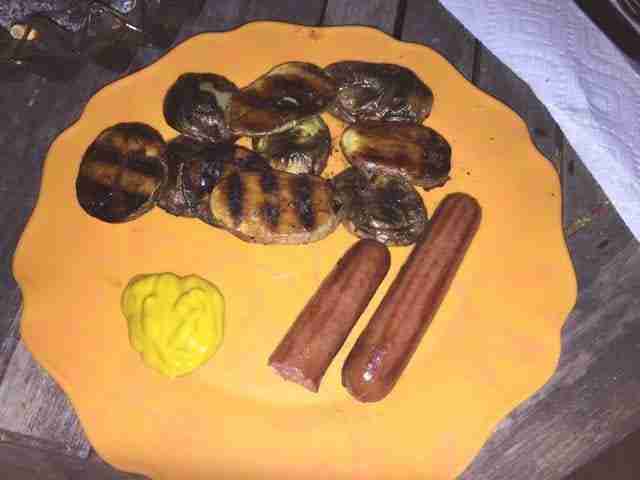 I was on a mission. 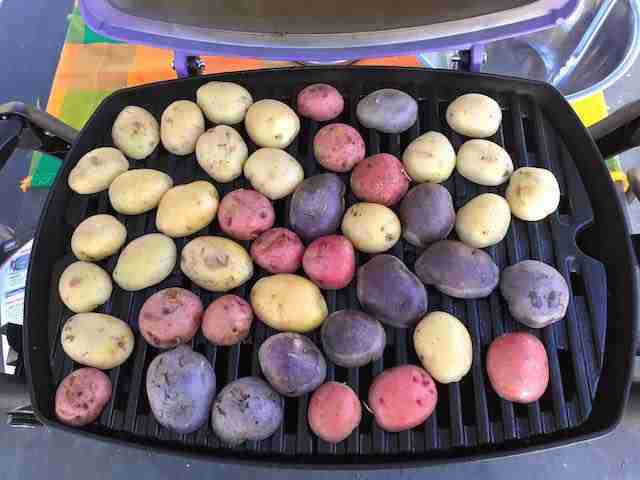 Now I get the variety packs with white, yellow, red and purple.****

****(But be careful. You do realize there are any number of “paleo Approved” offerings they sell now, wrapped in plastic, boxed in boxes, and distributed by big trucks until it gets delivered to you in a smaller truck. Lot’s of them are dubbed “treats,” yet you don’t have to get stung by bees to get them. That stuff above is poison stuff. It’s a thousand times less expensive, too, but I’m sure that’s just coincidence.)

That was for this meal, a pasture raised chicken done on the same grill prior. 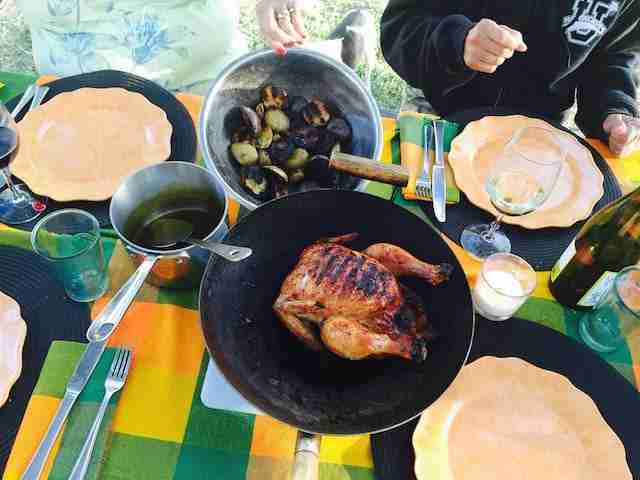 Did those taters while the chicken was resting. The sauce is a quart of chicken stock reduced to 1/2 cup, infused with a bit of tarragon.

OK, so I’ve covered how you can use them pretty much ubiquitously and so easily in your meals on the spot, or even easier out of the fridge for whatever else you’re going to do in the days to follow.

But guess what, and this goes back to my original issue? I could not find a way to eat potatoes or almost only potatoes for the “Potato Hack” rapid crazy weight loss for as long as it takes, which is like 7-10 days minimum, 2-3 weeks if fucking serious. I believe this will help if that’s your problem, too.

Know why? They’re kinda like French fries and I can even enjoy them cold, and I mean cold with nothing on them. Remember, you just slice in half, grill ’em. Yep, you can add season, like salt & pepper. Malt vinegar? Wotcha, mate! Ketchup? Of course, Jim Bob.

So great and easy to work with, and the combination of crispy on the down side, potato pudding in the middle, and the crusty skin give you so many creative options I know you’ll do way better than me. In addition to the 3-minute country taters in a bit of butter that you can enjoy by themselves (seasoned), you can also do:

Once you get going there’s no end to how you can use these once you grill them. Remember, the key to the versatility is the taste and texture and it’s the grill that does that: crispy down side, pudding inside, crunchy skin outside. You can use all three, or only two at a time.

Grace us in comments with what you come up with.