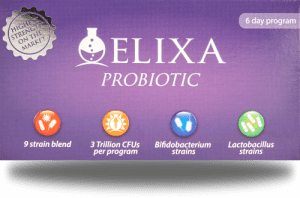 The roughly 5-week Elixa Probiotic experiement (ElixaFTA.com) is complete and all that’s left now is to get the data from the nine separate gut-bug tests (stool samples), 6 of which we’re submitted to uBiome, and 3 to AmGut.

To recap, I first took a uBiome sample about a week before starting the course, then both a uBiome and AmGut from the same “location” on the morning right before commencing the 12-day course.

About halfway through, I took another uBiome and then right at the end, both a uBiome and AmGut. It actually turned out to be a 13-day course, since I was out of town for a day and forgot to bring it along. Coincidently, it was between doses 6 and 7.

Finally, I did a uBiome a week after done, and then just a couple of days ago, both a uBiome and AmGut at 2-weeks after completion. So, if anyone from home has done a more thorough setup I sure don’t know about it. Apparently, these things take a while to process. Given it’s been near six weeks since submitting the first kit, we should begin to see these test results trickle in. I’m curious, though I really don’t know what it’s going to reveal that I don’t already know: I feel fine.

I did a food log as well, but kinda lost interest about halfway in, because every day pretty much looked like every other day. My diet is rather simple and we don’t eat out a great deal. It’s pretty much whole grains, potatoes, beans, eggs, and dairy in various forms with raw whole milk being the principal form. In conjunction, I eat modest portions of meat & seafood; and for the nutritional density: liver pâté, oysters, clams, mussels, sardines. A little fruit, mostly apples. I supplement with vitamin d, k2, magnesium, and turmeric. 2-4 times per week, I’ll enjoy a craft soda like Virgil’s root beer or San Pellegrino blood orange soda (pretty remarkable, but true: I consume sodas as they were intended … occasional indulgences, duh).

I was going to do the whole thing alcohol free, but decided that would kinda be cheating because I’m a regular drinker and the whole point was to take the test as I am with no other variables, and I’ve been eating this way for quite a while—since moving to Mexico in late May, where being by myself, I just wasn’t into cooking much besides eggs, or boiling something like potatoes or a pot of beans. Nevertheless, we had three outings during the second week of the course where other people were drinking (including in front of live music at a pub) and I didn’t feel like it in the slightest. “Ice water,” please. Read further to see why that might be.

On the whole grains front, it’s nothing like being a staple—maybe the equivalent of 2-3 slices of bread per day. That’s why I try to get a fair amount of potatoes and beans to toss in the starch/carbs category.

I really don’t have a lot to report in terms of effects, with two exceptions that are probably related:

Number one started pretty much right off, and was reminiscent of the crazy dreams being reported way back from large doses of resistant starch in the form of potato starch. Number 2 is something I didn’t notice until the last half of the course, which is probably why I didn’t notice months ago when I took four 3-day courses, but all of them separated by at least a week each time.

It was pretty odd for me. Some combination of lack of motivation, nothing is urgent, don’t worry be happy. I’m not good at such explanations since I’ve never had any sort of anxiety or depression issues I’m aware of. I don’t stew over stuff very long, never lay awake worrying, etc., so it was kind of bizarre to be even less concerned about much of anything.

But this raises interesting possibilities, though I know next to nothing about mental problems. For sure, if I had some history of anxiety, I’d definitely want to try this stuff—could be very powerful. But if I had a history of depression, I might stick to a 3 or 6-day course now & then. Anyway, it was marked enough that I noticed. Definitely something is going on there.

Within a week of being done I felt pretty much back to my old self, and digestion and well being seem fine to me.

I definitely think this stuff is to be taken on an empty stomach first thing in the morning, no food for at least two hours. I did notice an increase in waste volume, so I suspect one might experience discomfort, perhaps bloating if taking it with food, especially prebiotic food.

OK, I think that’s about it. More later, when data begins coming in. In the meantime, ElixaFTA.com if you want to give it a try.