“Terrorism is to do with everything except Islam.”
12th Year Anniversary Blog Marathon Begins Tomorrow

I recently blogged about this topic here. It was actually a bomb of a post (it happens). Little to no interest, which kinda mystified me, since it has been such a big deal in times past. But it also happens that I sometimes miss the mark in blogging what might interest me, but not correspond elsewhere (it happens).

Stalwart I am, I’m going to try again, a bit different angle, more experience, and some pics. And, a big qualification to render this as something of curiosity, not something you necessarily want to do.

To recap, Beatrice and I took on a project to live off grid, guard a large property where a fire took place in August, and I may be managing the rebuilding project on site, 24/7. But the important thing is that the view is astounding and it’s 3 miles down the hill to her work. We love it, 4 dogs and all, all camping out in an RV. We regularly laugh at how crazy we’ve allowed ourselves to become.

For instance, when she’s head down, cleaning up the RV, I like to joke that she’s going to tarnish our trailer trash image. We have so much fun poking fun at ourselves, the dogs. It’s a crazy life. Being all together in a 30′ RV every night lends a special touch to simple human contact and closeness…and canine contact, with 3 of the 4 of them playing musical bed & covers periodically throughout the night. Scout (“butt hole”) growls if you change position while sleeping. I could go on and on. We laugh all the time—unless we both tipped a bottle a little too much, and we have a little mini shit-talking fight.

…So I’m not going to suggest that this is what anyone ought be doing. We went up to the cabin a few weeks ago and of course, heaters were blasting. Once the rebuild is complete and we move in, we’ll be making it toasty, I’m pretty certain. This isn’t particularly desired, but to our surprise, remarkably doable and one could even say, challenging fun. That’s all.

So this isn’t what I’d call comfortable by any stretch, but that’s not the point. It’s remarkably not miserable, which is my chief interest. In other words, we can simply do it, handily, to our surprise. I figured I’d get along, but I was concerned that Beatrice would just hate it, get into a funk about it, et cetera, et cetera. To my amazement and joy, the exact opposite has happened. I actually think she’s adapted more profoundly and quickly than I. 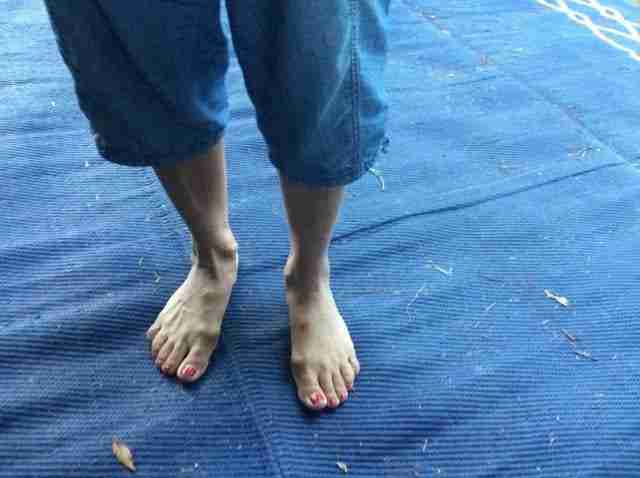 I snapped that the other day and quickly checked the temp. Yep, 45. And she was only wearing the tank top she sleeps in.

She hasn’t complained a single time and she used to be the one bundled up in a 70 degree house, with both socks and furry house shoes on.

We have the ability to do heat. The RV has a main gas heater with a forced air fan, but the fan really draws a lot of power we’d prefer to use for the radio internet and TV, since we’re on solar and do not wish to run the generator. I got a small propane space heater, but it’s just too much bother. We’re just not that very uncomfortable in the 40s and 50s and I think both of us realize that if we get accustomed to keeping things warm it would become an obsessive addiction, or something. Instead, we just make a good French press coffee every morning that doubles as a hand warmer.

This is probably a limit to what can be done on a 24/7 basis without bringing heat to the party. If it gets much colder and for any length of time, we’d either have to heat the space or, basically, hibernate; which is to say, spend a lot of time in bed, under heavy cover.

Well, time to kick the cold adaptation up a notch. We’re now fully acclimated to 45 in the mornings, purposefully not using any heat at any time. It gets into the 50s and 60s for highs, but by bedtime you’re chilled to the bone, rather like at the end of a ski day or a 2-hour winter hang-gliding ridge soaring fun thing at Ft. Funston. But this is every day.

Whereas I used to have cold hands even in a 70 degree house, I now have only mildly chilly hands at 45-60 all day outside.

Morning temp was 41 today and still no prob. Outside now with three upper body layers, bare hands. I have gloves but I don’t bother with them anymore. The discomfort is so mild.

Next few days we up the test, with morning temps forecast down in the mid-30s.

Just a bit ago, I reported on the great socks experiment.

How I keep the feet relatively warm in 40s temps. Oversize house shoes, no socks. I’ve tested it. Even loose fitting socks make my feet colder through what I suspect is a very small restriction of circulation. Keep your core warm, let your blood circulate freely to extremities.

In my test, put a sock on one foot, no sock on the other and sure enough, the stockinged foot was noticeably colder 10 minutes later. 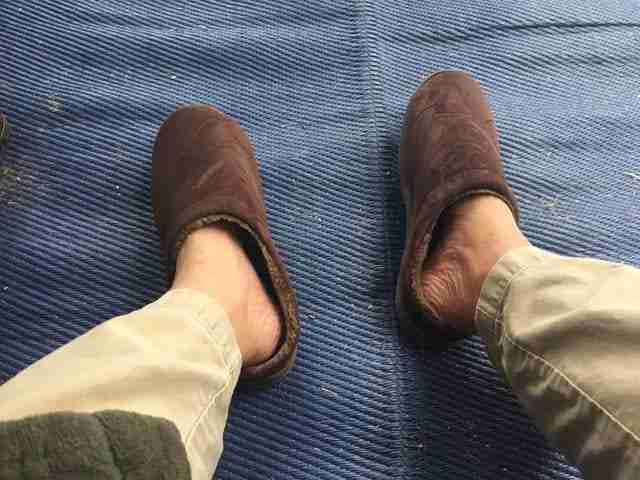 As a final tidbit, in exchanging email with Ray Cronise just a bit ago, he suggested I might want to include this study into the post: Ambient Temperature and Prevalence of Obesity: A Nationwide Population-Based Study in Korea. It’s new, published only earlier this month.

Recent studies have suggested a possible association between outdoor or indoor temperature and obesity. We aimed to examine whether ambient temperature is associated with the prevalence of obesity or abdominal obesity in the Korean population.

Data on anthropometric, socio-demographic, laboratory and lifestyle factors were retrieved from National Health Insurance System data obtained in 2009–2010. Thirty years (1981 to 2010) of meteorological parameters for 71 observation areas were acquired from the Korea Meteorological Administration. Included in this analysis were 124,354 individuals. A body mass index (BMI) ≥ 25 kg/m2 and a waist circumference (WC) ≥ 90 cm (men) or 85 cm (women) were considered to represent obesity and abdominal obesity, respectively.

This study finds an association between ambient temperature and prevalence of obesity in the Korean population when controlling for several confounding factors. Adaptive thermogenesis might be a possible explanation for this phenomenon.

We’ve all lost weight, which ought be intuitively obvious. Myself, Bea, and all four dogs, with Nanooka (“Nuke”) being the most profound. She was always a kinda plump female; not fat, just plump. She’s now ripped and has abs, down 20-30% in body weight. And, because of the cold, I feed all four dogs very liberally.