“Those who know history are doomed to watch others repeat it.”

Over and over, in less than 5 minutes, watch Brigitte Gabriel cite five documented historical references to explain why the peaceful majority were always irrelevant, utterly laying waste to the fucking bla-bla of some abjectly moronic law student in her fancy hijab.

No need to add anything to that.

…Along the same lines, a commenter from yesterday emailed this article, thinking he was making some point about painting with broad strokes, or whatever, just like that stupid emphasis on the peaceful majority, above.

What I Discovered From Interviewing Imprisoned ISIS Fighters – They’re drawn to the movement for reasons that have little to do with belief in extremist Islam.

Yea, like what, 72 Virgins or some other equally delusional thing? Dominate wives and rape their daughters, perhaps? Just bored? Long for attention with a chance at hero status? Unemployed? No real future? Can’t afford an iPhone? What, exactly is each fighter’s specific “motivation?” Do they fucking lie? I know that’s a strange concept for a pissant leftie “thinking” moron to grasp … that people who vow to kill innocent people are capable of lying.

Folks, this is the sort of dumb and meaningless psychobabble that’s going to be the end of Western Civilization if people don’t wise the fuck up. It’s like reading some leftie Hitler appeasement & puff piece in May of 1940—perhaps an interview with Neville Chamberlain on his outlook for his last 6 months in office—about how German troops who’d just then begun loading Jewish families into boxcars for Auschwitz had different levels of conscience and/or motivations for listening, or not, to its voice.

It’s impertinent. And it’s fucking stupid and displays an abject lack of any perspective on the history of mass murder, particularly mass murder that’s driven by top-down ideology, and not simply the conquest of strategically relevant territory.

Wise the fuck up.

Equally dumb is the right, with their typical closed borders NIMBY attitudes, apparently unaware that humanity itself is a migration story. In the vast main, migration—and particularly refugee migration—is a plus for existing countries and communities, as they are infused with people with enough gumption to risk it all, give it all up, and head elsewhere.

Two commentaries on that. First, this one from this morning.

Syrian refugees are potentially a net plus because they ought to be, in the main, a self-selected group of hardy individuals who voted with their feet to leave a repressive situation. Moreover, they could be a good source of intelligence, a mine of contacts and potential agents who can be sent back into Syria.

Of course the refugee flows will also contain a fair number of enemy agents and pentrators. However, if you handle refugees well, you can get more than you lose. The reason there is such a visceral resistance to resettlement is not due to some sudden slamming of the door, but because the public has NO CONFIDENCE in the Obama administration to manage it properly.

The public attitude toward refugees is a proxy for their belief in the administration’s competence. When Obama says “they will be vetted” not enough people believe him. They have been burned too often. When Obama says “there is no religious test”, that is interpreted to mean he will discriminate against Christian refugees, because he has pulled too many bait and switches in the past. If anything they will suspect that truly moderate Muslims will be passed over in favor of types that the Orientalist leftists would approve of.

Whether or not that is true, his falling popularity in the polls suggests that his proposals will be viewed askance. Right now his endorsement is poison.

Advocates of refugee resettlement must realize that the public isn’t necessarily hostile to Syrians as much as doubtful of the administration’s ability to perform due diligence and to act fairly.

In comments on another post this morning, this was quoted, but without attribution.

As for illegal immigration, human migration operates on the principle of desperation, not invitation. People don’t leave everything they know for long, dangerous journeys through hostile lands to get to a place where they can scrub toilets and build houses they can’t afford to buy because they enjoy it. Unless you are going to make life less inviting than the places they are fleeing, you can’t stop them. You can’t stop them with walls, fences, politicians, laws…never have and never will. Do you think you can scare someone desperate to escape whatever violent impoverished situation they are fleeing in central america by walking all the way to the US? You can’t. Unless Europeans reopen the death camps people are going to try to escape their terrible Middle East situations by going there. If America somehow deported every last illegal immigrant, they would just come back. Are you going to kill them? Because that is what it would take.

In the end, this is a problem of the abjectly moronic left in America and Europe. Here’s a picture worth a thousand words. 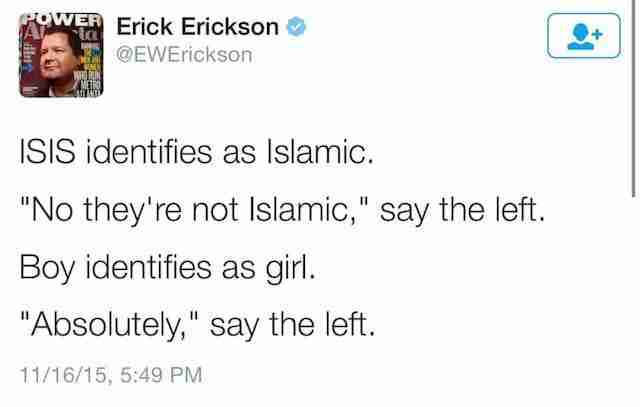 Can’t imagine a better snapshot of what you’re up against, with people who only ever attempt “thought” in order to attempt to find out what everyone else “thinks,” the mishmash of “thoughts” never being given a “second” thought for internal consistency.

“Those who know history are doomed to watch others repeat it.”

Update: Just hit my radar. It’s a PBS Frontline documentary on ISIS in Afghanistan that aired yesterday, AKA a fucking religion of fucking peace my fucking ass fucking update.