Understanding Paradigms and Narratives is the Key to Enlightenment.
Take A Vacation; Snowy Mountains or Cabo San Lucas

This will count for my last post touted as a “blog marathon.” Seven posts in three days is way above average, but nothing at all like the 12 posts I did the first time, or 20 posts the last time.

I’ve been defeated, so no feats for me! 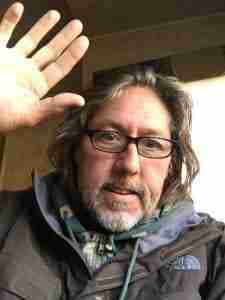 Last week I did a laudatory post on chronic but mild cold exposure, which we really just happened upon. It’s not by any design; it’s simply a tradeoff. But, we were looking at the forecast for this week and saw that temperatures were going to go from mid-40s in the mornings to mid and low-30s. For example, this morning, 5th day in a row like this: 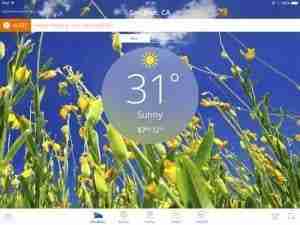 It occurs to me that it’s serendipity and happenstance that I took on the challenge of doing quantity and quality both, over a day or two. Links here to my previous performance. Those two events were very intense. It’s really damn tough to pump out posts of reasonable quality six to a dozen times in the space of 24 hours, and you have no team behind you. One man show.

It was beyond my ability this time. I managed three posts on Thanksgiving day, three posts yesterday, and there are only two of the six that I truly care for (the fist and the last).

After chewing on my symptoms, I think I have a very mild instance of sub-clinical hypothermia. I mean, most conditions of environmental origin exist on a spectrum. It’s not like one minute you don’t have a condition and the next, you do.

My brain is really muddled right now, so perhaps it’s easiest if I just put it in bullets.

There are two pronounced biological symptoms, one I found an explanation for, the other, I haven’t. I’ve had pretty pronounced diuresis and thirst over the last 4-5 days. Classic signs of diabetes, right? Well, wait. The other symptom I have is loss of appetite and loss of hunger.

Combine that with chronic cold right at the edge, and maybe it all makes sense. Because my brain is a real fucking mess right now, let me just shoot ideas. Please feel free to explore it all in comments.

The diuresis has clinical support.

Cold-induced diuresis, or cold diuresis, is a phenomenon that occurs in humans after exposure to a hypothermic environment, usually during mild to moderate hypothermia.[15] It is currently thought to be caused by the redirection of blood from the extremities to the core due to peripheral vasoconstriction, which increases the fluid volume in the core. Overall, acute exposure to cold is thought to induce a diuretic response due to an increase mean arterial pressure.[16] The arterial cells of the kidneys sense the increase in blood pressure and signal the kidneys to excrete superfluous fluid in an attempt to stabilize the pressure. The kidneys increase urine production and fill the bladder; when the bladder fills, the individual may then feel the urge to urinate. This phenomenon usually occurs after mental function has decreased to a level significantly below normal. Cold diuresis has been observed in cases of accidental hypothermia as well as a side effect of therapeutic hypothermia, specifically during the induction phase.[17][18]

So, when I thought of this yesterday, I did a little test. Drove down to a local market (car heater turned to 78, but it was very short lived) and got a bottle of Mexican Dr. Pepper that’s made with sugar, not HFCS. Downed it. Within minutes, I feel snappy, and for the next few hours, no thirst combined with no urge to pee.

Go figure. A few hours later, and everything is back to normal. Constant thirst, sips of my Soda Stream, home made club soda, and peeing. Then, in the evening, while bundled up and watching the new Netflix series Jessica Jones with Hunter—the beagle hound by my side—I eat about a half to 2/3 pint of Häagen-Dazs Rocky Road ice cream and same thing happens. Energetic, thirst gone, no urges to pee every half hour. Until hours later, then the return.

But, that’s not all. Since Beatrice left for the Holiday down south Monday morning, just when the cold snap hit, I have had a profound loss of appetite, and non-existent hunger. When she left, knowing cold was coming, I went shopping and loaded the fridge. I made a whole gallon of beef bone and oxtail stock/broth combo. Most of it all still sits there, 5 days later.

Amongst the stuff I got was a tub of mixed nuts, and it’s been at arm’s reach from where I’m typing now, for five days. 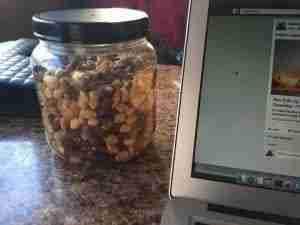 Does that substantiate my claim, or what? I’ve eaten less than a quarter of the tub, over five days, and they’ve been right here, all the time. I love mixed nuts. Don’t you?

Two days ago, I ate a sandwich and a half, and a cup of soup, over the entire day, and I had to down the half sandwich at 8pm (Lebanon bologna and swiss cheese) with no hunger or real appetite, just caution, really.

Finally, after just a handful equivalent of those nuts all day yesterday, I finally felt something and went to work. 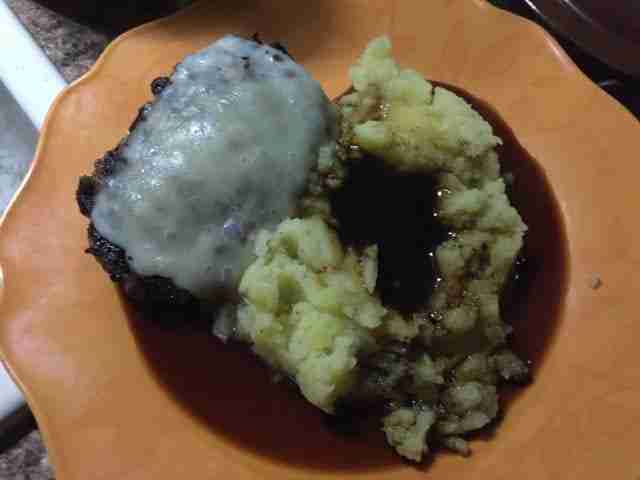 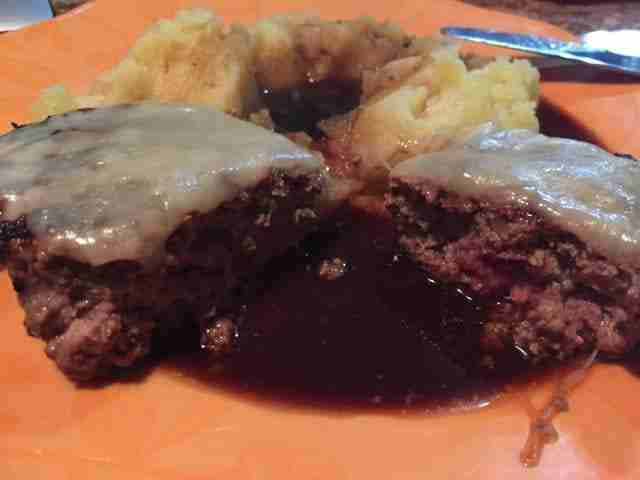 Perfect medium for 80/20 ground beef inside.

But to me, it’s counter-intuitive that I’m not experiencing crazy hunger in the face of the chronic cold exposure. You’d think one would be naturally ravenous to stoke the metabolic fire. It’s 11:30 am right now and I have not the slightest desire to eat a thing. That pic above was the last thing I ate, 16 hours ago.

I think I’m in a sort of quasi-hibernaton funk. After all, some mammals do it and its onset is likely keyed by ambient and body temperature, combined. The diuresis and thirst is easily explained, but not the loss of hunger and appetite, so far as I can tell…but muddled brain, I’ve not really been digging.

I’m likely in deep ketosis. All my test gear is packed away, but I’m pretty sure that if I got it all out, I’d have substantial BP, high blood glucose (120-140), and would be peeing purple.

We should all know about physiological insulin resistance, by now. So what I believe has happened is that I’ve entered a state of profound insulin resistance in order to both manufacture and preserve glucose for my brain. Complete survival mechanism, but not optimal performance.

What’s interesting to me is that this comes not from an LC or ketogenic diet, but rather chronic cold combined with profound caloric deficit, to access the metabolic pathways those dietary regimes attempt to tap, but from the direction in which those pathways evolved.

…But I still can’t figure the loss of hunger and appetite.

Update: I’ve put most of this in various comments, but as Beatrice returned yesterday in the evening I went out in the afternoon to get a hose and 4.5 gallon propane tank for my Mr. Heater Buddy, a great value. It runs on the 5-lb propane bottles but only lasts a few hours on low. This tank & hose hookup should last a week with morning and evening use.

So, since about 3pm yesterday I had heat in the trailer, no battery usage. Diuresis terminated after a couple of hours inside, with temp in mid-50s, and so did hunger by about 7. Everything back to normal today. So, conclusion, for me, is sustained temps in the 40s with adequate clothing is very doable, but 30s and low 30s with the same level of clothing is just a bit over the edge without a source of heat, such as even a campfire. I imagine it could be done with true arctic or mountaineering clothing, but then you tradeoff mobility. Hard to do anything, especially banging around in the trailer.

So, another way of looking at it is that I was already at max clothing I want to have and can function with, even cooking. That’s jeans, two sweatshirts, and my lightweight North Face Rain Jacket that preserves heat, but breathes. So, to do that when temps get low, I’ll need to have some sources of external heat.

If you’re enjoying this and have shopping to do, please consider hitting this Amazon link for your shopping. That’s all you have to do. When you do, it creates a perfect win-win-win. Rather than peddle some specific product to you, just buy whatever you like, need, or wish to gift. You win. Amazon competently gets it to you in a day or two, so Amazon, the producers, and suppliers win. At no additional cost to you, Amazon gives me 6-8% of the purchase without adding a single penny to your bill. Even if you just pop it in your cart, I’ll still get paid when you decide to check out.