So America, When Are You Going to Kick That Trojan Horse Barry Obama In The Ass?

I had something far different in mind and hundreds of words in draft. When it gets trumped, it gets trumped. I’ll just post the whole damn thing, with apologies to HotAir. But do click on the original, click on an ad or too. I do something like this very rarely, but I scanned the background reportage and it’s legit.

While we fight over Trump, France closes 3 mosques, finds hundreds of weapons

The French have adopted what is clearly a no-nonsense attitude toward radical Islamist terrorism since the Paris attacks and they’re not taking their foot off the gas. As the United States continues to debate over “tone” and how to balance religious liberty and tolerance against domestic security, Francois Hollande’s forces have “cut a few corners” on those subjects and just begun shutting down mosques. At least three of the Muslim houses of worship have been closed already and law enforcement has found a trove of disturbing items among the haul. (Speisa)

Police investigating the Paris terror attacks have shut down three mosques in a series of raids to close the net on Islamic extremists, the Express reports.

They have placed nine people under house arrest. Another 22 have been banned from leaving the country Mr Cazeneuve said.

In additon to the mosques, the French have kicked in the doors on 2,235 homes and taken 232 people into custody or placed them on house arrest. More than three hundred weapons were discovered . Tom Porter at the International Business Times reports that the trove included 7.62mm ammunition, Kalashnikov rifles and terrorist propaganda videos. And they’re only just getting started. (See edit below)

Hassan El Alaoui, one of France’s chief imams, told Al Jazeera that French authorities were likely to close down more than 100 mosques in the wake of the Paris attacks.

“According to official figures and our discussions with the interior ministry, between 100 and 160 more mosques will be closed because they are run illegally without proper licences, they preach hatred, or use takfiri speech,” he said.

Takfiris are those who accuse fellow Muslims who do not share their hard-line interpretation of the faith of apostasy, and is often used as a pejorative term.

Reports like this likely present a rather awkward challenge for observers in America who are used to a large number of rights which the government isn’t supposed to violate. It’s easy to cheer for the French rooting out that many terrorists and their supporters and removing their ability to launch attacks, but the methods being employed will probably give many Americans pause. First of all, simply having a weapon of any sort is tantamount to a conviction there, so the idea of badgering “law abiding gun owners” is sort of an unknown concept in Paris. And with our First Amendment rights, the idea of armed, uniformed men kicking in the doors of churches of any type and hauling the congregants out to a wagon makes us recoil.

But now even some of their own Imams are estimating that more than 150 more mosques may be closed. France really isn’t all that big… how many mosques do they have? To be fair to the French, though, what else are they supposed to do? They’re physically much closer to the home turf of several terrorists groups and thanks to the EU’s open border policies it’s far easier for the bad guys to move around. They’re dealing with an infestation and it needs to be stamped out. The methods probably appear harsh, but they’re doing what they need to do in order to survive.

Exit question: how will all of Europe’s leaders who screamed about Donald Trump suggesting a temporary ban on Muslim immigration react to this news?

EDIT: Original post incorrectly implied that all the weapons were found in a mosque. The total figure included raids on multiple sites.

What in the fuck is our Pussy-in-Chief waiting for, given that, as I posted to Facebook this morning:

Here’s the thing. As more is learned about the Muslim husband and wife—the ones with with the newborn baby—who killed 14 people at the husband’s place of work during a holiday party, you will see all the 20/20 hindsight about how somebody should have known.

There are millions of Muslims next door. And today, nobody knows. Expect his mother to be charged soon, because it pretty damn much looks like she helped. So, here you have newlyweds, a new baby, and mother-in-law living next door. How sweet. How much suspicion does that rouse? Alternative? Regard all with suspicion until you explicitly and publicly hear them call all this bullshit out. And regularly, and with sincerity.

This should be your rational standard in having any sort of connection whatsoever with ANY Muslim.

The thing most remarkable since 9/11 from the Muslim community is that they do not help in any measure. Even the FBI says this. Virtually zero come forward with any suspicions or warnings.

Think about it. It is your life, and you don’t owe those goat fuckers and rapists anything, nor their “peaceful” supporters. 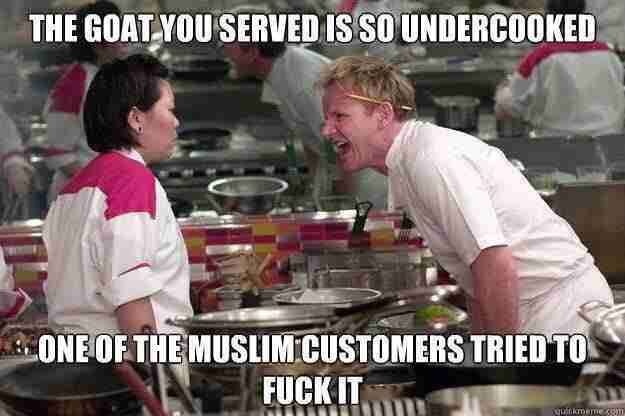