I’ve About Had It With Leftist Activist George Takei

I do like Officer Sulu, and I phrase it that way out out of a deep respect for him and his accomplishments. And, I appreciate a number of things he tries to do now. I overlook his gay activism because I get it; and usually, he’s not too untoward about such fringe, evolutionarily dead-end, who fucking cares? behavior qua wholesome lifestyle. I do not begrudge anyone their preference in other people’s genitals or masculine/feminine mannerisms, but I do object to making fringe, almost fetish behavior the new celebratory, prideful centerpiece of an already naturally evolved culture.

I’ve followed his feed on Facebook for a long time, both before I deleted my account some time ago, and after I created a new one last summer. I do so because he is a smart man with a somewhat quirky/clever sense of humor and he posts some decent mind puzzles and fartwarming shit. I like he’s reserved—I’m not—but it’s also why I regard his political overtones and innuendo and whatnot with a gimlet eye.

But lately, I suppose given the political climate with the Left Narrative crumbling just about everywhere (Islamic Terrorism, Insurance co-ops and even for-profit companies bailing from Obamacare, Gun control as a limp-dick measure when those who mean to do harm will get them anyway, Climate Change is the cause of terrorism, 1,000 + pipelines in the US, but this one is “dangerous,” and I could go on). You see it as you like, I see grasping at straws.

I could pick other examples of how I’ve been sharing stupid shit he posts with my own commentary, but this one struck a particular nerve with me, perhaps because of my post yesterday that was in part, about charitable actions toward others in the context of immigration policy.

This school found a great way around the fear of embarrassment some children face when asking for help. Don’t worry, kids–they’ve got you cupboard.

So, I shared the post and prefaced it thusly:

Just another aspect of the left’s narrative you should dismiss. Of course, since @GeorgeTakei never heard a meme or slogan from the left he didn’t love, don’t expect him to add anything substantive.

But hiding what’s in plain sight for the benefit of not having someone taking advantage of charitable actions not feel uncomfortable, “othered,” and all manner of the leftist rot does a disservice to all.

But this doesn’t fit the leftist narrative which, above all, exists to create and nourish dependency.

Here’s the problem, though. Too often, when people encounter something that challenges what they think is just great, they don’t actually read and consider your challenge. They just assume it’s the standard “counter-narrative” and of typing away. Watch. 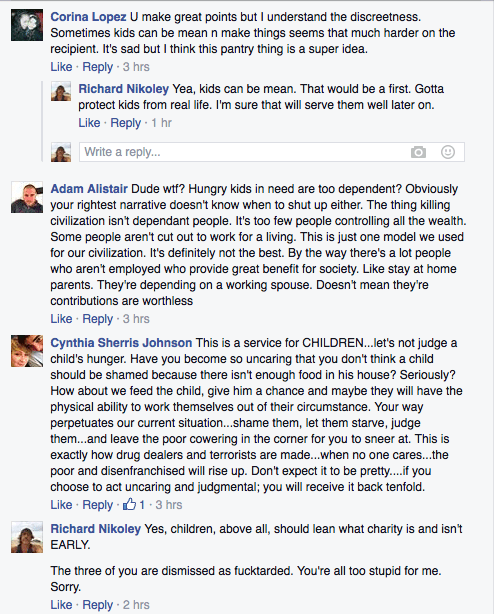 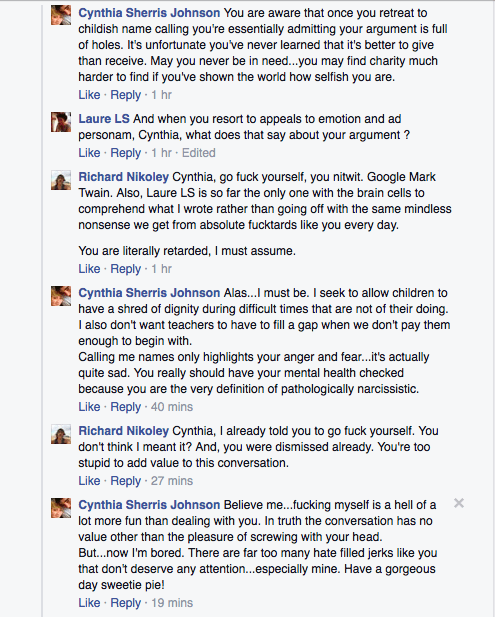 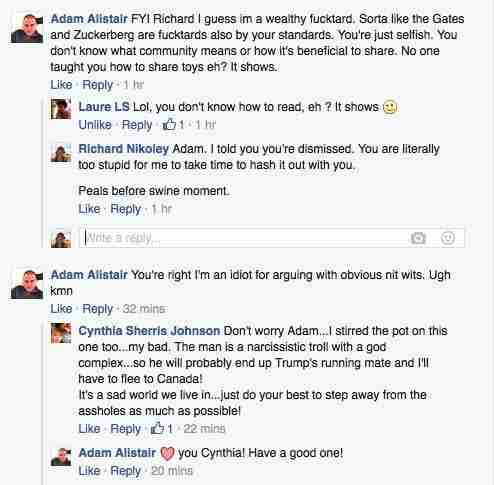 I have no patience anymore and there are too many distinctions (such as the plain fact of dependency, just to get even started; and the plain trend toward zero judgment, “safe spaces,” and plain freedom from anyone even having to concern themselves with what other’s might think…it’s a lost cause) so I prefer to just call them fucktards and too stupid, and then let Adam Alistair and Cynthia Sherris Johnson bask in their delusions both about the issue I raised, and what I’m about.

I’ll close with John Cleese. Too stupid to grasp your own stupidity.