Let’s Make No Mistake About What I Really Think About 7th-Century, Dirt-Scratching Savages AKA Muslims

I really don’t like having any part of my art and audacity of self-direction be in any way ambiguous. Of course, in areas I write about often, it’s not. People pretty much know where I stand, and to their credit, follow along with my forever-evolution; because where I stand, now, changes over time…like…evolution. We have minds, so we don’t have to wait the time for the glacial paces of nature.

But there’s a pernicious undertone that I detest. People who love what I do in one area make assumptions about me in others for their own benefit—specifically in order to avoid the discomfort of confronting a complete contradiction. I get it all the time. I’m good at this and that, but completely off the wall in this thing they’re regurgitating conventional “wisdom” to me about; and what gobsmacks me the most is how they don’t understand how saying something like that completely exposes them as fools who don’t truly understand a damn thing in terms of fundamentals, self-direction, thinking for themselves, or developing themselves to such a point where they have a more sound and complete confidence in their self-directing than they do in anyone else in the world, bar none.

Basically, they’re taking my word for something when it sounds right, taking the word of others for other things, and giving me a backlash: blaming me because everyone whose word they take for various of most or all things aren’t all consistent. See, that’s how they expose themselves as fools. A fool is any adult who doesn’t think for himself or herself in all matters.

I’ve earned my chops. I change focus, views, and conclusions all the time. And it’s usually always over the same fundamentals, essentials, and principles. You see, fundamentals, essentials, and principles can underly vastly different conclusions or hypotheses, given new data and perspectives that demand WIDER INTEGRATIONS. Take note of that, and note how much that passes for “thought” these days in so many areas—where there is an explicit seeking of the most narrow integration of facts and understanding necessary to advance a narrative, or just plain propaganda.

I can not imagine what it’s like to actually spout shit other people said or wrote, over and over, and to use it as argument or fake “thought,” rather than in the way of art and audacity: take good stuff, chew on it, dismiss bad stuff, direct your own mind, and come up with your own synthesis as an argument, original to you. Re-evaluate it regularly, improve it or dump it, as necessary, and as honesty and integrity demand.

I wrote stuff on Facebook today that tons of people feel, but few really form reasons as to why it’s perfectly natural to feel that way. The left certainly makes you fell guilty for feeling it, and will just as certainly punish you for expressing such feelings. 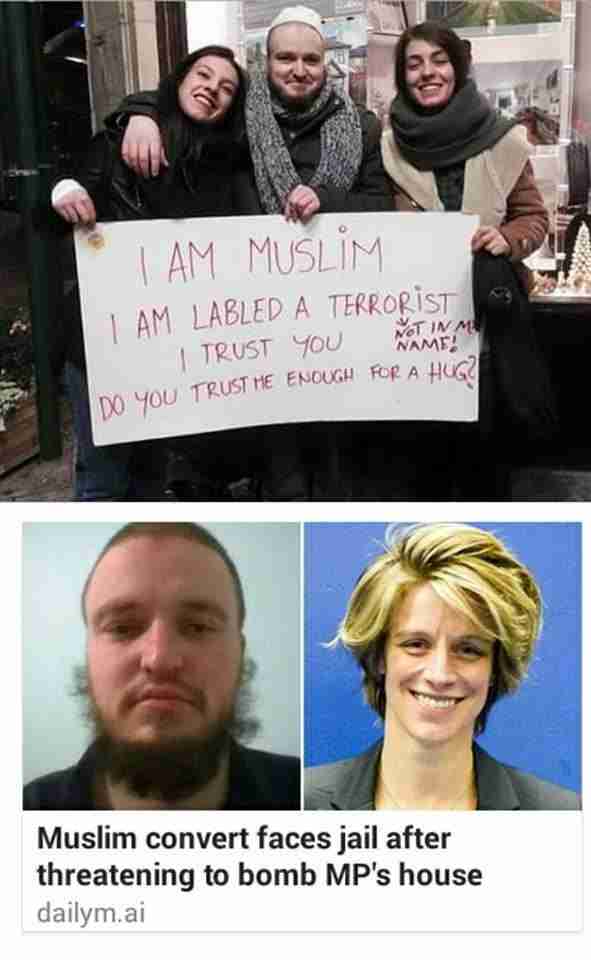 A Muslim convert who protested outside Parliament with a sign saying ‘I am Muslim, do you trust me enough for a hug?’ is facing jail for threatening to bomb an MP’s house.

Craig Wallace used the sign as Stop The War protesters came to Westminster for the vote on military action in Syria last week.

It stated: ‘I am Muslim, I am labelled a terrorist, I trust you, do you trust me enough for a hug?’

But the 23-year-old, of Willesden Green, north London, is now facing a possible prison sentence after he threatened Tory MP Charlotte Leslie online following the vote.

Wallace, who calls himself Muhammad Mujahid Islam online, wrote on Facebook: ‘I’m going to smash her windows then drop a bomb on her house while she’s tucked up in bed. You dirty f****** pig-s******* s***.’

On December 3, the day after MPs voted to authorise the air strikes, he wrote: ‘I’m going to find her and show her what it’s like to murder innocents. You dirty pig-f****** w****.’

Expressing outrage is one thing. Issuing specific death threats to specific people, giving time and place? If someone does that to you, you ought be able to kill them first, followed by applause from all. But we live in a dumb and dumber society, now, completely fine that when seconds count, the cops are only minutes away. Anyway, my own expression of outrage on Facebook:

Newlyweds with new baby kill 14 of the people who threw them a baby shower, during their Christmas party, update.

Regard all with suspicion, update.

What that gets to is the juxtaposition of the sign, followed by the clear assault, juxtaposed with the fine young couple in San Bernardino, followed by battery and murder.

I later followed up with a serious, generally anti-Muslim rant, explicitly trying to paint as broad of a stroke as I can…artfully, audaciously, and always self-directed and always not giving the slightest little fuck what any other organism on Earth thinks about it.

Let’s just cut to the chase. Can we just be honest, and let me tell you what you’re all thinking?

We do not need them. Since Algebra (if that’s even true and I doubt it) in about 600AD in Spain (rough guessing) they have not contributed….

ONE SINGLE IOTA TO HUMAN KNOWLEDGE, PROGRESS, ADVANCEMENT, WELL BEING.

Show me the fucking patents. Fuck all.

We do not need them.

Muslims, far and wide, are of the anti-civilization, and I refuse to associate with anyone who professes that pig-vomit of a religion.

Did I just dehumanize them? Well, humanity is a concept and as we’ve evolved from hominoids shitting in our own fruit bowl to where we are now, so too is the concept of humanity something that exists on some scale and eventually, the left end drops off out of scale as the whole advances down the timeline.

I don’t know what the solution is, but I do know that in terms of Earth civilization, that #1 we don’t need one single society in the Middle East and #2, we would all be better off without any single one of existing societies in the Middle East.

They offer nothing to the world. They bring death, destruction, and vast wastes of time, money, and energy. They are, in fact, parasites as populations of societies that hold vast swaths of land. That would be fine, but they will not keep to their own primitive ways that would, soon enough, basically be just like when folks venture into the Amazonian rain forests to encounter tribes. Well, not just like. I don’t want to insult those Amazonians.

In essence, they aren’t a civilization. Now, think deeply about that. Civilization is not a natural phenomena, but something man made. So, whereas they were indeed one of many primitive civilizations in the 7th Century, they have largely stayed there, just coopting everything useful from the West, exclusively invented by and produced in the West, while keeping social structures largely static. The only hope of most individuals to actually participate in meaningful ways—such as art, invention, literature, industry, technological innovation—is to go to the West.

I really don’t like explaining myself, but I’ll add a big clarification in this case, simply because of the artful audacity of this self-directed post. I bear no ill will against any peaceful individual in the world, so long as they uphold reasonable standards of civility and good will towards others.

What we are seeing, now, is that there are potentially hundreds of millions, up to a billion or so, who do not. I owe those animals nothing, neither should you, and you ought not be a fool because at this point, it’s clear you can’t even tell whether they live next door or not.