Did You Notice Who The Muslim Menace Just Executed? 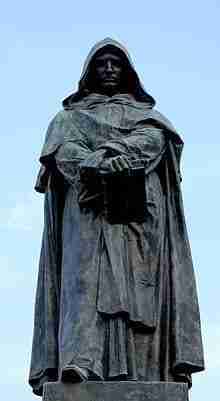 Let me give you a hint.

Any clue? No? Then how about this?

“…went even further than the [] Copernican model.”

Zip? Nada? Try this, then, the golden clue.

“He also insisted that the universe is in fact infinite and could have no celestial body at its ‘center’.”

…There is one reason, and one reason only that I have adored the early astronomers (Claudius Ptolemy, Abd al-Rahman al-Sufi, Nicolaus Copernicus, Johannes Kepler, Galileo Galilei) but it stopped there. You don’t typically find his name amongst the lists of the greats.

My modest idea is that the others were waffling under church pressure, and it was he who was the first to say that ‘hey, fuckheads, what’s the point in moving the centre of our universe from the Earth to our sun? It’s just one of many.’

The Universe has no center.

But the reason I adore all of them is that the Church at the time—the Roman Catholic Church—basically advanced a geocentric premise that was easily falsifiable, and though it took hundreds of years, it turned out to be an idea that’s time is past. Lots died putting it to rest.

So the Muslim Menace burned him at the stake in 1600. See here.

Giordano Bruno (Italian: [dʒorˈdano ˈbruno]; Latin: Iordanus Brunus Nolanus; 1548 – 17 February 1600), born Filippo Bruno, was an Italian Dominican friar, philosopher, mathematician, poet, and astrologer.[3] He is celebrated for his cosmological theories, which went even further than the then-novel Copernican model. He proposed that the stars were just distant suns surrounded by their own exoplanets and raised the possibility that these planets could even foster life of their own (a philosophical position known as cosmic pluralism). He also insisted that the universe is in fact infinite and could have no celestial body at its “center”.

Beginning in 1593, Bruno was tried for heresy by the Roman Inquisition on charges including denial of several core Catholic doctrines (including the Trinity, the divinity of Christ, the virginity of Mary, and Transubstantiation). Bruno’s pantheism was also a matter of grave concern.[4] The Inquisition found him guilty, and in 1600 he was burned at the stake in Rome’s Campo de’ Fiori. After his death he gained considerable fame, being particularly celebrated by 19th- and early 20th-century commentators who regarded him as a martyr for science,[5] although historians have debated the extent to which his heresy trial was a response to his astronomical views or to other aspects of his philosophy and theology.[6][7][8][9][10] Bruno’s case is still considered a landmark in the history of free thought and the emerging sciences.[11][12][13]

Sorry, time warp in my brain for a minute, there.

Please excuse. I’ll try not to allow such an “obvious” oversight to happen again.