There’s zero doubt amongst anyone who’s read this bog—that goes back a dozen years with an average of a post per day—that at heart, I’m an iconoclast curmudgeon with little good to say about anything anyone does, except for myself.

Still, I always long for coming up roses; but, it’s so hard to find. When I do find, on those rare occasions, I get beside myself with a passion to share it, and it goes to the front of the line. I do think that balance is something one ought strive for.

It’s my one true fault.

As someone who’s a member of the club who started a business in a spare bedroom (with $250 left to my name) and took it to 30 employees and $3 mil in annual revenue—and stuck it for 20 years—I understand a few things about what I love and hate about business and entrepreneurial endeavors. Remember: love and hate are two sides of the same coin of passion.

Accordingly, I’m a fan of Shark Tank; and now, Beyond The Tank. Think of them as VC For Dummies and I’ll Forgive the Lies, but Now: SHOW ME THE FOR REAL! Respectively.

In Shark Tank, Kevin O’Leary is everyone’s favorite “bad cop” Shark (yes, meaningless distinction). In reality, he’s the most benevolent of all of them. This is why he’ll often trade off equity for limited royalties. It’s amazing to me how many entrepreneurs tend to reject that out of hand when, with the cash offering and his personal help and access to all connections and expertise, it’s way better than equity….IF, you build a lot of equity…which is the point.

O’Leary is my favorite Shark. In a nutshell, he offers deals where, if an entrepreneur had seriously asked himself before going into the Tank: What Deal Would I Offer Me? then Kevin would blow the other Sharks out of the Tank. Malheureusement, the other Sharks seem safe, for now.

…So a couple of weeks ago we were watching Beyond The Tank—a status-update show, where they follow up with previous folks who came away with a deal. Via Inc:

If there’s any lesson from the first two episodes of Beyond the Tank, it’s that a deal with a shark can get ugly very fast. For Josh Hix and Nick Taranto, co-founders of New York-based food delivery startup Plated, their partnership with Mark Cuban was literally dead on arrival. After accepting Cuban’s offer of $500,000 for roughly 6 percent of their company, the co-founders tried to renegotiate the deal based on their company’s most recent growth.

“That’s not the way I do business,” Cuban said during the most recent episode.

Plated’s co-founders never closed the deal with Cuban, but four months later, Hix and Taranto attracted an investment from shark Kevin O’Leary. Today, Plated is just under three years old is generating more than $100 million in revenue per year, according to the co-founders, but the business isn’t profitable. The company has also grown so fast that it has moved into larger fulfillment centers 14 times in the past three years.

Remind you of anything? I predicted Amazon’s failure for lack of profitability over years way long time ago (1st & only time I’ve ever been wrong). I had to interrupt this draft to go meet the Amazon delivery guy for about the 3rd time this week (I’m a Prime whore).

While I’m watching this episode, I got on the Mac and went to Plated.com. No, so far as I can tell, they don’t have any affiliate or bonus program, so this is purely from the depths of my cold & dark heart.

Loved the website design. Perfect match for the product and service. Within minutes I was signed up with the 3-meals-for-2 per week plan, for $75, free shipping. They have a 2-meals plan (all meals are for 2 people—honor your essential niche) with a shipping charge, and a 4-meals plan, also free shipping.

Because I already knew that Mr. Wonderful was involved, I was pretty positive and enthusiastic. Money is not enough for him to be associated with dealing in crap. I have, over the years, tried a number of vegetable box deliveries, grassfed and pastured meat deliveries, and even so-called quality and upscale prepared meal deliveries. The former leaves you with lots of waste…unless you have kids, I suppose. The later is always kinda crappy and you’re left to convince yourself that it was good because the price was reasonable and the convenience grand.

But, what if you trade off the utter convenience of microwave reheating for a pre-prep; or, release yourself from imagining that a box of great vegetables and fruit—some of which will go to waste—and a freezer full of meat you have to figure out how to match & pair for meals is the best thing going? How about literal gourmet-quality that gives you just what you need for a great meal for 2, at half the price from an upscale restaurant? And, you bring your own alcohol, so your tab isn’t doubled? The tradeoff is that you have to spend 30-45 minutes cooking to easy, meticulous instructions. But, counter-tradefoff: two can really have a lot of fun at this. You get to decide who’s chef and who’s sous chef. And perhaps you can trade there, too.

Did I mention herbs? All fresh, on the stem, in the exact proportions needed, no guesswork and no waste (working with dried vs. fresh herbs isn’t even kissing cousins territory, in comparison).

So, I got my first delivery yesterday. Plated uses private delivery that specializes in this. Think of it as Uber Delivery. The guy who dropped off my box had 12 others in the back of his car, just for my local area. This was all he was delivering. It’s critically important. You can have the best food ever; but because it’s food, delivery to the people preparing it and eating it must come with equal care, attention to detail, precision, and timeliness. You think it’s about the food, don’t you? That’s the given. It’s the “easy” part. In direct to consumer—the coming way of the world—this is where all your gold can turn to lead really quick.

Distribution has always been an ugly, costly stepchild. So is warehousing and inventory/storage. Hugely costly things, buried in the price you pay, but you pay for them—just as you pay for every penny of taxes the business pays, if it’s profitable. Direct to consumer distribution, combined with little to no storage/inventory—for this application—is hugely cost saving, so it ought to be utmost demanded that everything arrives pristine, fresh, and on time.

I think they understand all this and aren’t skimping: to take the cost savings you’re ignorant of, for themselves.

…The arrival so happened to be just about the time we were ready to think about dinner, and now here’s perhaps the biggest bonus for me… Who’s the cook in the house, chez vous? For us, it’s always me. There’s levels about why that is, but mostly it’s because my mom is about the only one I won’t fuck with whilst cooking. Yes, even I have at least one level of dispensation.

Out of the three meals of a beef, chicken, and fish dish, here’s what we did together in about 45 minutes. I’ve provided three pics, two of both dishes no flash, and one, with flash. Clicking on them gives you a bit bigger and higher resolution.

This was the Trout Piccata, Rosemary and Oregano Orzo, and Green Beens. 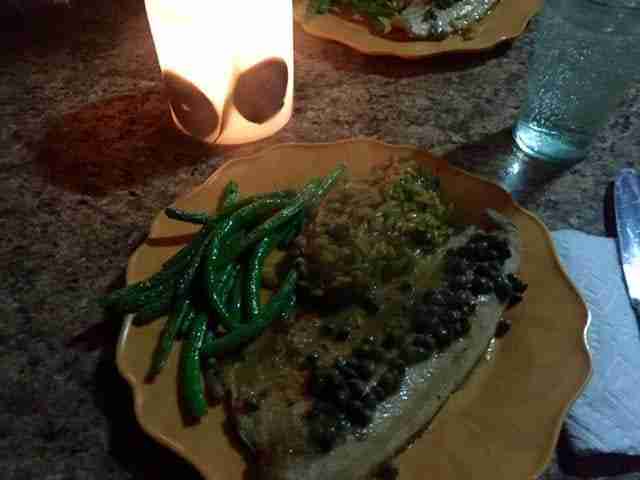 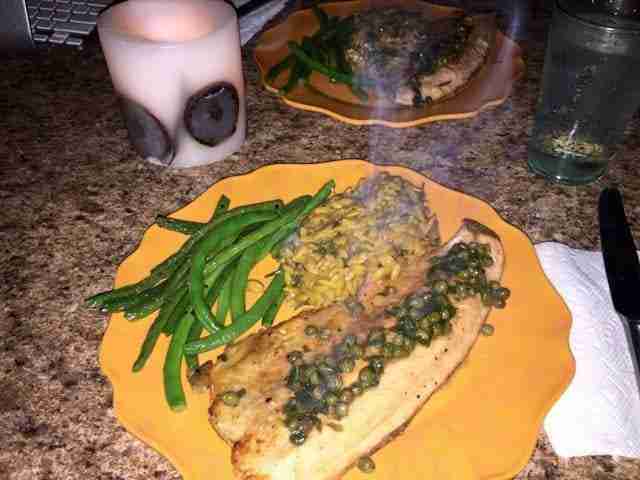 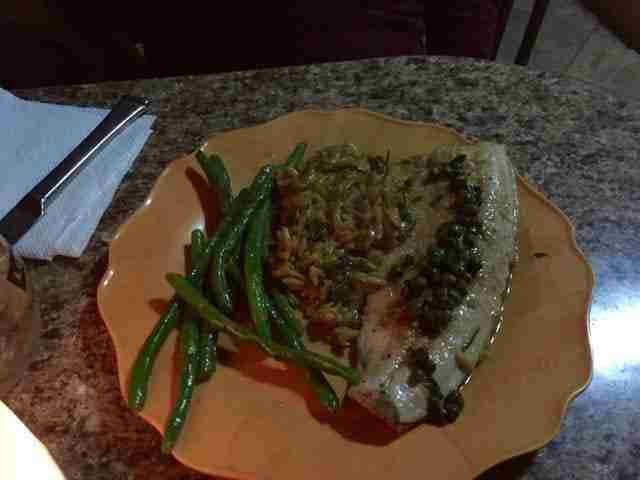 This cost a grand total of $24 for 2 people, delivered literally to my door, and everything portioned where I didn’t even have to measure, zero waste. Everything fresh and pristine. Look at that fucking trout, and the generous portion size—a pet peeve with restaurants and their skimpy portions of fish. The skin side was sparkling, like it thad been caught that day.

Perhaps most importantly, my non-cook wife was super engaged and enthusiastic. With everything well defined and instructions laid out, she felt completely confident to be my sous chef for the evening, and I only yelled at her a couple of times.