So here’s the final post—and I had no idea I’d be doing it—of the 2015/16 Holiday Season. Vacation ended today and Beatrice went back to work, via a 6am session at the gym with her new personal trainer.

I’ve done a couple of other posts on this 2-week whirlwind, here and here, but this was all about me. Bea’s brother is a long time San Francisco 49ers season ticket holder. Way back, we took in a couple of games at Candlestick Park when he wasn’t going to be there. This time, it was for the new deal, and Bea thought: early birthday.

Wow, did Robert really up his game when he shifted his membership positon to the new Levi’s Stadium.

…Before I continue, allow me to wax digressive on the Keynesian-esque nuclear bombing of well-established urban delight that grew up organically from the  20’s through the 50s, destroyed in the 60s and 70’s, into the 80s. It was the idea of “multi-purpose stadiums” for football and baseball.

They were uniformly aweful.

Baseball takes place in a ball park, along with all the traditional trappings and meanings only fans know, which assemble to make it a summer park of a flavorful delight that’s especially prescient for young boys and their fathers, who want them to know all about it. Football takes place on a gridiron, ought always be outdoor—because this is a fall and winter game, and the elements ought test both fans and players alike.

Who but a bunch of economic theorists, bean counters, and “urban planners” could manage to suck every ounce of essential delight out of two things at a time, and ignore all important distinctions? Fuckin’ commies always strike again.

Levi Stadium is quite a wonder. No, I don’t care all that much about the rent seeking that surely took place to get the deal done. At least they came to do good, and did very well, as the Hawaiians say incessantly of the Baldwin’s. Pick your battles. 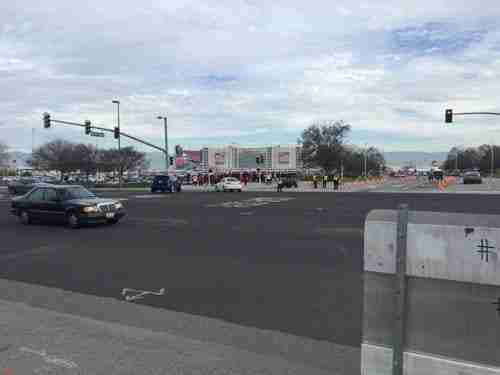 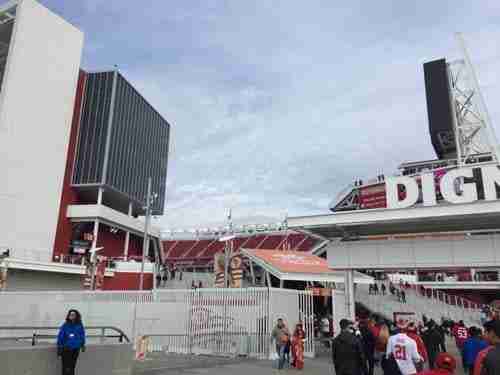 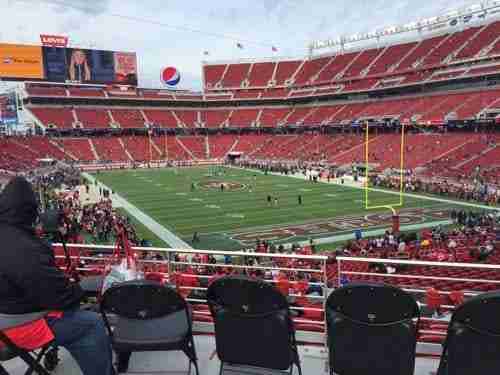 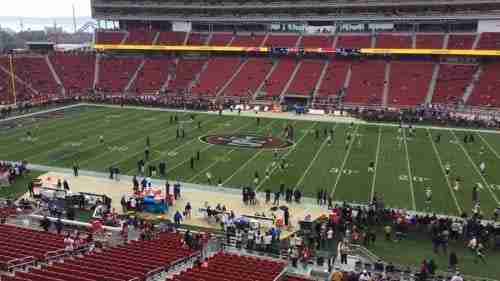 From where I sit, in error. 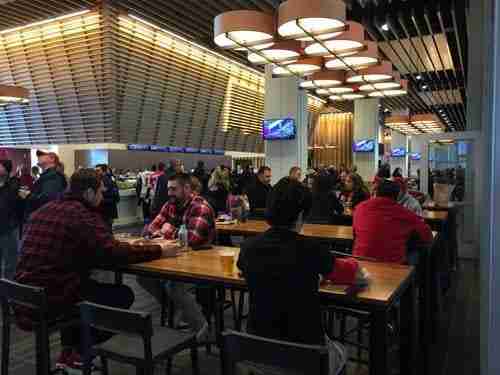 The Levi’s 501 Club. Exclusive to sections C112-115 where Bea’s bro holds tickets. You basically get to your seats via the club, and it’s just the perfect sized “crowd.” 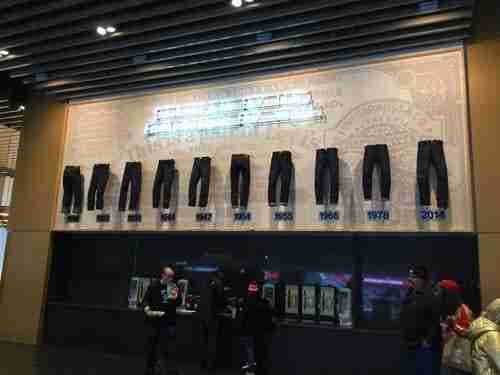 In case you din’t know why they call it the 501 club. I was happy to see 1978 vintage, about the time I began wearing those button flys for decades. 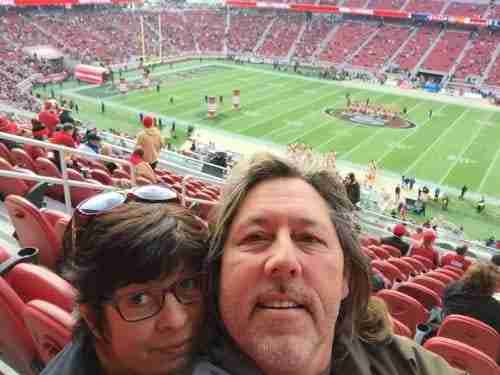 We were in the wrong seats, a section over, not on the 40 yrd line with isle seats. but this is a better selfie than the other I took.

The game wasn’t a nail-biter at all. The 49ers, at this stage, can be very frustrating. Clearly a team in rebuild mode, so naturally, as soon as they do something really great, they almost immediately and always take some kind of adverse step back. Holding calls really fucking irritate me, especially at critical moments. Yea, I get it. Sometimes you have to take the call, or it could be worse (think intentional foul in basketball). But holding is always explicitly intentional, by its nature, and I often question whatever calculation went into that.

Anyway, the 49ers were behind most of the game. Tied it up late at 16 all, and it went into overtime. There’s where it got particularly exciting. After winning the kickoff reception, they did some dumb stuff that resulted in the Rams getting into field goal position, and since both teams had possessed the ball on offense, we’re into Sudden Death rules (don’t you love that? Sudden Death. Warms my heart).

Miraculously, not only did SF block the field goal attempt, but in such a way that it lobbed until it was caught by a red shirt, and carried upfield a good bit.

I couldn’t have asked for a better deal. Thanks sweets.

…My brother Dave made reservations for us at Michael Mina’s Bourbon Steakhouse & Pub at Levi Stadium. He has a long-term business relationship and if you didn’t catch the tasting menu deal in San Fran a few weeks ago, do see here: Chef’s Choice 14-Course Tasting Dinner at Michael Mina, San Francisco. 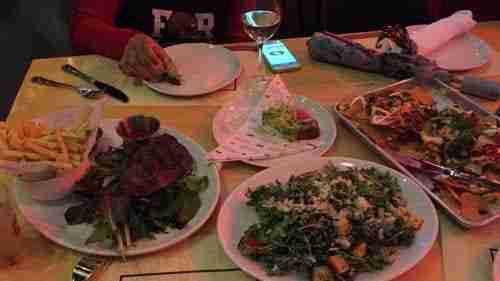 There was no Red Carpet but as soon as I said “Nikoley,” we were ushered to a table and comped nachos showed up in a few minutes. Nice, too. Heavier on the mashed beans and sour cream, way less on the heavy cheese. 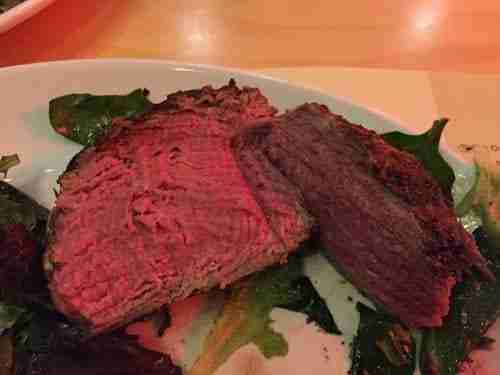 The filet that Bea & I shared was wonderful. First time I’ve had a spice rubbed filet, but it was gentle and did not detract from what one loves about a perfect medium rare treatment of such a quality piece of prime beef. 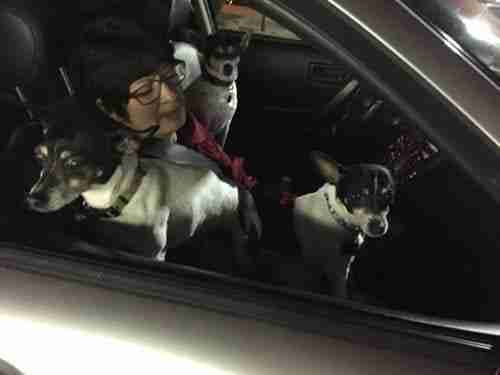 Bea’s sister and bro-in-law, Anita and Bud, graciously watched over the three animals. We’ll leave them up here off grid for a few hours, but this was an 11am to 7pm deal, so it was wonderful to have the peace of mind of competence and care. We brought them the leftover nachos and salad. 🙂

Thanks especially to my love-head-wife-unit Bea who engineered the whole thing, to Robert and Mabell who gave up their game spots, to Anita and Bud who watched the dogs, and my Bro, who provided a finishing touch that took the whole damn thing over the top.

I literally had various awesome dreams all night about all of it, from when I hit it at 8:30pm, to when Bea hit the road at 6am.