Just popped over to Tim’s place (you remember ‘Tatertot,’ right?) to catch up and had to share these three bits of wisdom, which I agree with wholeheartedly:

Gut Microbiome – I have been quite disappointed that the research and discussion still revolves around identifying the bacteria responsible for different diseases and less emphasis is placed on the diet. I think it is becoming apparent to all that each person is unique and carries a unique set of gut microbes. Fecal transplants get little mention anymore, despite the great promise shown. For each of us, I think all we can do is experiment with the foods we eat and try to find a great mixture of fruits, veggies, fungi, nuts, seeds, grains, etc… foods that keeps our digestive system working well. I have not lost my passion for using potato starch and inulin as a supplement when fiber intake is low, but they should not be a sole source of fiber. I keep trying to expand my repertoire of fibrous foods as I come across new sources (my latest is spelt).

Yep. You are either feeling good, sleeping well, performing well and pooping well…or you’re not. All this fixation on special “boutique” strains some people stress, is pure bunk. BTW, two of three of my American Gut test results came back and I have significant … Akkermansia! So there! You can click the image for the readable version.

Gut Testing – The various companies offering gut tests have been the biggest let-down of 2015 for me. I’ve spent a lot of time in the black box of bioinformatics this year, and I’ve looked at hundreds of gut reports. I’m afraid there are simply too many variables both in the tests themselves and in the individuality of the guts to use these tests for anything more than amusement value. Now I see that some of these companies are even offering health predictions based on your sample. I stand firmly that a gut test generated using 16s rRNA profiling is in no way useful as a diagnostic tool. For one thing, I do not trust any of the results or percentages generated by 16s rRNA sampling, and for another, the gut biome changes so rapidly after a single meal that a snap-shot of your flora based on a simple swab of poo is meaningless in the grand scheme of gut health. While it is fun to see the species/genera named in a report, they are not worth the paper they are printed on in terms of diagnostic potential. Culture-based sampling is more reliable, but cannot be used to identify an entire microbiome, only certain species. If I suspected a pathogen, I would have a real doctor use a culture-based platform to discover if it exists. Additionally, the bacteria in your gut is only half the story. The fungal/yeast inhabitants are quite likely just as responsible for maintaining good gut (and overall) health as the bacteria identified through standard gut tests.

Absolutely. Worthless. Waste. Of. Money. Plus, American Gut, or Human Food Project, or whatever the hell, has literally the worst process and signup design I have ever seen. You have to sign up by means of a fundraiser donation, then you get a kit, then you have to sign into some website via a printed URL that I’ll be dammed if I can remember (and don’t have the paper), then to get results, you have to go to the same URL, but I can’t find a fucking link to it on any of their pages, nor the email they sent, because it’s not coming from American Gut… They suck.

That’s neither here nor there, though, if the results mean anything and unless it happens to identify some serious pathogen problem, not useful. Mine were all over the map, and Tim spent significant time going through them all just to basically say, “yep, you’ve got a gut.”

The only thing I want to do further is compare the AG and uBiome results that were from the exact same piece of poop. Soon as I can find the damn login and see if the third test set has come in.

So, bottom line, think about food, maybe some probiotic and prebiotic supplementation, and get cultured by a medical facility if you have serious problems.

Dieting Trends – I think the tide has shifted away from low carb diets and more towards vegetables and grains. At present, “”paleo” just seems to be a keyword to direct internet searches and sell diet books. How anyone ever thought that crispy bacon strips emulate ancestral eating is beyond me. Potatoes are “bags of sugar” and all grains are evil. The reality is, almost any whole plant food is healthy for us. Refined grains are not whole foods. We do not require pounds of meat per day. In my mind’s eye, the biggest dangers in eating are the over-processed, refined foods we choose for convenience. In that respect, “”paleo” steered us away from the worst offenders, but never really taught us to eat a human-appropriate diet. I’m hoping that the diet fads of 2016 and beyond all include plenty of whole grains, beans, potatoes, and heavy-hitter fibers.

Yep again. Absolutely need those animal foods, as far as I’m concerned, but they really go a long way, especially if you get in some liver (pate is easy), oysters, clams, and mussels. And this is one area where even canned is fine. I eat lots of smoked oysters in olive oil. I also get then fresh at an Asian market not 3 miles away, $4 per dozen, shuck ’em yourself. 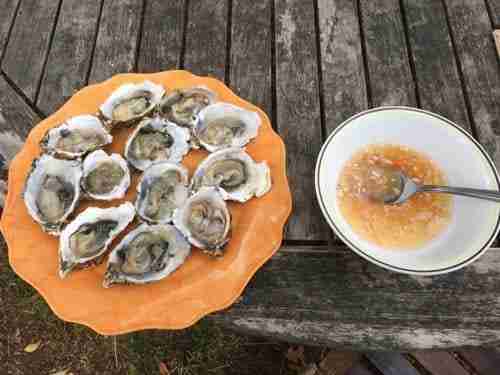 On the whole grain front I’ve learned a lot. Have tried lots of various breads, emailed some companies, etc. Basically, almost nobody uses true whole grain, with both bran and germ. Usually, it’s just bran and often enough, it’s added back into refined flour, so the whole thing is a mess.

My touchstone is that provided no alcohol is involved, does it give me heartburn or not. Generally speaking, it’s the whole grain sourdough breads that do the best on that score. Hit & miss, otherwise.

Until I found Whole Grain Natural Bread Company at a local market styled after WF. This is a local company over in Santa Cruz, and they mill their grain fresh and whole every baking day. And you can literally feel the difference. The bread has a distinct moist quality that’s feels of slightly oily. Yep, that’s the nutritious germ, there.

And guess what. Through about 1 loaf of simple Mark 1, Mod A whole wheat bread in about a week, not one instance of even an adverse burp, much less heartburn.

Look, as I’ve said before, I begrudge no one their grain free deal if that’s what feels right for them. But Paleos really ought to at least be honest enough to admit that when they blanket condemn grains, they are not making a distinction between true whole grain and refined, bleached, and often “fortified” crap.

Alright, can I have a round of applause for Tim Steele?