Can Eating Mashed Potatoes With Your Meals Cause You To Eat 30-40% Fewer Calories?

I’ve had renewed interest in “The Potato Hack“ lately, emerging here just over three years ago, producing a bunch of posts and comments once Tim “Tatertot” Steele brought it to my attention. He’ll soon have a book out, specifically on The Potato Diet, or “Hack,” as we like to call it. I’ve skimmed through his draft and offered a few suggestions. You’re going to love it. There’s actually nothing particularly new about it, as you’ll see.

Lots of folks gave the intervention a shot to various degrees way back then, and so far as I recollect, lots of people dropped a lot of pounds and those who’d been having blood-sugar issues from chronic, low-carbohydrate induced insulin resistance saw improvement there as well. Some ketogenic dieters even remained in a ketogenic state, owing to the chronic caloric deficit (what ketones are really for, physiologically…starvation). For myself, I had become pretty disillusioned with seeing fasting BG at 115-130 day after day for a long time, kinda just becoming an LC eater by default, I suppose. A few days of mostly potatoes and no more problems. But I really hate going more than a couple days eating bland potatoes only. Is there a better way?

Maybe. I recall very well one commenter, Marie, who had excellent results even including a little protein and fat. See this post (meal pic included). She wrote:

Obviously, boiled potatoes are highly satiating. How do we know that? Because it has been experimentally tested in a pretty clever way, and that was way back in 1995—so 21 years of low-carbohydrate advocates generally being wrong about [some forms of] potatoes (a potato is a potato, french fried or boiled, see…it’s a carbohydrate…which is just a carbohydrate, you know…just like soy protein is exactly the same as ribeye steak…and corn and soy oil…no different from beef tallow or pork lard…fat is fat…oh, wait…).

OBJECTIVE: The aim of this study was to produce a validated satiety index of common foods.

DESIGN AND SUBJECTS: Isoenergetic 1000 kJ (240 kcal) servings of 38 foods separated into six food categories (fruits, bakery products, snack foods, carbohydrate-rich foods, protein-rich foods, breakfast cereals) were fed to groups of 11-13 subjects. Satiety ratings were obtained every 15 min over 120 min after which subjects were free to eat ad libitum from a standard range of foods and drinks. A satiety index (SI) score was calculated by dividing the area under the satiety response curve (AUC) for the test food by the group mean satiety AUC for white bread and multiplying by 100. Thus, white bread had an SI score of 100% and the SI scores of the other foods were expressed as a percentage of white bread.

CONCLUSION: The results show that isoenergetic servings of different foods differ greatly in their satiating capacities. This is relevant to the treatment and prevention of overweight and obesity. [emphasis added]

…So, basically, you feed a bunch of people 240 kcal servings of different foods when fasted and hungry, wait a couple of hours, and let them tackle an all-you-can-eat buffet. Then you document how much they ate. And of all foods tested (including meat and fat), boiled potatoes caused people to consume the least, voluntarily, ad libitum. Stephan Guyenet blogged about this four years ago and I made a mental note of it, probably why when Tim approached me that I was so open to it. Also, here’s a good explanation of all the ins & outs, along with this nifty graph. 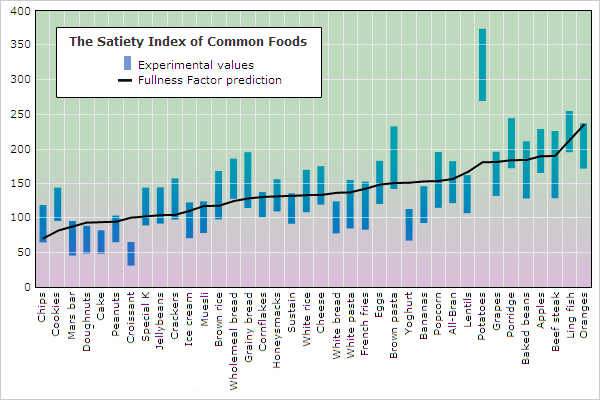 Notice potato chips way down there on the bottom, both predicted and experimentally. “You can’t eat just one” was indeed a prophetic marketing slogan. But then, to see how experimentally, boiled potatoes blows everything else out of the water—including the prediction—is truly a remarkable finding that appears to have been largely ignored in general, and derided and scoffed at by the low-carbohydrate community.

As you might have guessed, I have something new to show you, hot off the presses: The effects of potatoes and other carbohydrate side dishes consumed with meat on food intake, glycemia and satiety response in children (full free text).

Over the past 40 years, the consumption of potatoes has decreased by 41%, [1] which may be a consequence of movements aimed at decreasing serving sizes or the removal of French fries from school cafeterias and other quick service restaurant meals for children. [2, 3] This may be due, in part, to the increasing evidence in the literature where observational studies show potato consumption may lead to increased risk of obesity. [4] Moreover, it has led to an increased demand for general dietary advice to replace potatoes with rice and pasta, which may or may not be of lower glycemic index (GI). However, these carbohydrates (CHOs) are rarely eaten alone on a daily basis, [5] but are commonly consumed in a meal with other foods that lower the GI of the meal when compared with CHO sides eaten alone. [6] For example, the GI of potatoes was significantly reduced from 93 to 39 when boiled Estima potatoes were served with 62 g of cheddar cheese and from 108 to 54 when mashed potatoes were served with oil, chicken breast and salad in amounts that represent a meal. [5, 6] Similarly, the GI of rice-based meals is markedly reduced through addition of other meal components such as tofu, eggs and vegetable [7] or chicken breast, vegetables and oil. [8] Therefore, these studies lead to the hypothesis that advice based on the GI of fixed amount (50 g) of available CHO, may not be representative of post-prandial satiety and glycemia when CHOs are consumed freely in a mixed meal. [9] Yet, only one study has reported the effect of providing ad libitum access to CHO sources in a meal on energy consumed and postprandial glucose. [10] Food intake by men given a fixed portion of meat ate 31% and 23% less with free access to mashed potatoes compared with pasta and rice meals, respectively. [10] No similar study of children has been reported.

The rationale behind the present study was twofold; first, current dietary recommendations regarding CHOs suitable in meals for children are not based on meal studies and second, are heavily dependent on their high GI and their fat content, and not on their overall functionality within a meal. We hypothesized that energy intake, postprandial subjective appetite, blood glucose (BG) and insulin in children following ad libitum meals with meat is not predicted from the GI of the CHO. Therefore, the objective of this study was to determine the effects of commonly consumed CHO side dishes such as potatoes, pasta and rice along with a fixed portion of meat on food intake, satiety, BG, insulin and gut hormone response among children (aged 11–13 years) with healthy body weight over a 2-h period. [emphasis added]

I’ll toss you an association: The 41% decrease in potato consumption over 40 years corresponds rather well with the onset of the obesity epidemic. Moreover, in the old days, most potato consumption was likely boiled, mashed, and baked or roasted potatoes; whereas now, it’s chips and fries. But, just an association in advance of The Big Punch Line, representing one potential line of hypothesis; such as 1) type of carbohydrate, 2) how it’s prepared, and 3) what it’s eaten with.

BACKGROUND: The effect of carbohydrate (CHO) foods on blood glucose (BG) is ranked by their glycemic index (GI). Boiled and mashed potatoes (BMPs) are ranked as high GI foods, whereas pasta and rice have moderate GI rankings. The objective of this study was to compare ad libitum consumption of common CHO dishes consumed with meat on meal-time food intake and post-meal satiety, BG, insulin and gut hormones in 11- to 13-year-old normal weight children.

RESULTS: The results for boys and girls were pooled as sex was not a factor. In both experiments, children consumed 30–40% less calories at meals with BMP (P o 0.0001) compared with all other treatments, which were similar. BMP increased satiety, expressed as a change in appetite per kilocalorie, more than all other treatments (Po0.0001). FFF resulted in the lowest (Po0.0001) glucose and insulin at meal end and post-meal and peptide YY (PYY) post-meal. Blood measures were similar among all other treatments.

CONCLUSIONS: The physiological functions of CHO foods consumed ad libitum at meal time on food intake, appetite, BG, insulin and gut hormone responses in children is not predicted by the GI. [emphasis added]

…So, give 12-hr-fasted kids the same morning meal (cereal with 2% milk, and OJ); then for lunch, a fixed portion of meat (they used meatballs), and as much of one of 5 carbohydrates as they want. Document total consumption. Total consumption with rice, pasta, or deep-fried or baked french fries was about the same…but 30-40% less with boiled mashed-potatoes. All the carbohydrate dishes were served hot to avoid starch retrogradation—i.e., resistant starch variations—and the mashed potatoes included butter and whole milk (3.25%), so hardly unappetizing.

I mean, for example, this paper on acellular carbohydrate was published in 2012 and has been pretty much ignored since (saw Robb Wolf emphasize it, so there’s that): Comparison with ancestral diets suggests dense acellular carbohydrates promote an inflammatory microbiota, and may be the primary dietary cause of leptin resistance and obesity. Hint: a calorie is not a calorie; but calories count. Mercifully, it’s not being ignored by all. Here’s a presentation by Dr. Ian Spreadbury, given to the Ancestral Health Society of New Zeland: Acellular Carbohydrates: Are Our Bacteria a Detector of Dietary Refinement? Its 20-minutes have been viewed a whopping 825 times, which is the maximum occupancy of the restrooms at Paleo f(x).

So how about some practical matters?

I’ll cover all of those in more detail in the next post, including a couple of recipes, one of which I just made today. Here it is: 1,900 total calories (my average need is 2,500). It’s 3 pounds of russet potatoes, plus a few other things. It’s very satiating, combined with enough palatability to really enjoy it. A perfect combination. 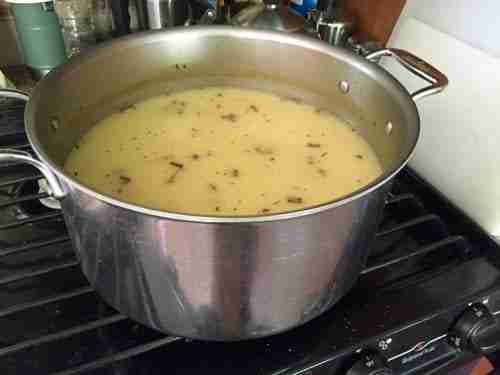 Think I can eat the whole thing in a day? If I could, I’d still be 600 below average requirements. Now, how hard would it be to eat 1,900 calories in pure ketogenic fashion, which would be an 8 oz. steak bathed in 5 oz of pure fat? See where I’m going with this? And wait until you see the nutrition profile of the whole thing, compared with some LC and Keto surrogate equicaloric samples.

One request for commenters. Let’s confine discussion to the science as much as possible (if you can, no hard & fast) and then tackle the practicalities in the next post in a few days. That way, all the helpful hints and hacks are in one place.