The only real value of this post is to point out that the actions of the subject thingy motivated Tim Steele to put together some excellent information on sodium, potassium, and the balance thereof, vis-a-vis The Potato Diet. Otherwise, it’s just a damn chore that I ought just ignore.

Here’s Tim’s post: Mr. Potatohacker: Thank You! Feel completely free to read it and never mind about the rest of this (though I have included some interesting stuff on how potatoes spurred massive population growth toward the end, including a cool, free 57-page paper). I wasn’t about to cast pearls before swine in any meaningful way and was ready just to let this drop, but Tim had the grace to lemonade the thing, and now we have yet another reference in answer to another irrational, baseless fear. So, this post became important to do on that basis alone.

Regarding the backstory—since curious minds have to know—It’s in response to this load of ignorant drivel by some kinda Karl Denninger of The Market Ticker, a blog whose design was ahead of its time in 2001: Mr. Potatohead: Fork You. Denninger fancies himself some sort of low-carbohydrate dietary expert. He also appears to be somewhat of a financial, market, economic, etc. contrarian—but perhaps I’m wrong about that. Didn’t have the interest to bother to look much, and unlike him, I admit shit like that. Having traded options derivatives full time, I’m familiar with the general ways of both cheerleaders and jeerleaders.

It got started when someone who reads the both of us pointed Denninger to this potato post via Twitter and copied me. It got this reply:

Chuck then tells him he clearly hadn’t read it, because, very near the top of the post:

…it has to be addressed preliminarily so that you clearly understand what it is, what it isn’t, and don’t feel hustled…because that’s what’s typically in play with those sorts of extraordinary claims.

Let’s get this out of the way, right away: It was way mostly water. I’d guess probably 11 pounds of water and 2 pounds of fat…

Now, what an honest man does at this point is any number of things that could include actually reading it, saying “oops,” or otherwise righting himself. But we’re dealing with a contrarian, perhaps one in it for the pure sake of just being contrary until like a stopped clock, he’s right and can point out how much smarter he is than everyone else. So, he doubles down on his dishonesty.

So unless the laws of logic don’t apply to some kinda Denninger, he just explicitly implicated himself in a boldfaced lie with hubris on top. Either he’s lying about having read it, or his first tweet is an outright lie since he explicitly says he “read all of it in fact,” without any qualification about perhaps missing some crucial element, like the very thing he picked out. There isn’t a logical alternative. It’s one lie or the other. Pick the one you like best.

Really, one need go no further. The man is a liar. He will lie right to your face and when called, double down. And people read him for insights on the market? Of what possible objective value could there be if you can’t trust the guy to consider seriously things that challenge his ideas or conclusions—and especially if he’s going to be publishing on it? Such a lack of any concern for his own proper integrity ought to be quite problematic, given what he does.

He didn’t stop there; once I called him out as a liar myself.

Amusing. While materially he’s correct, I haven’t read a thing, he uses that (correct) assumption to essentially conclude by clear implication that since I haven’t read his dozen or so posts I could find by searching various keywords on his 2001-era state-of-the-art blog, that I can’t possibly have anything studied to say…on “this,” whatever he means by “this.” And I won’t even bother to set the record straight here at any level, from the number of posts, years writing them, or any of the other things that constitute my extensive long & strong ties to the paleo and LC communities.

Incidentally, that tweet is another bold faced lie right to my face. He’s explicitly contradicting (“Baloney”) that I was explicit about the water weight and explained the mechanism behind it.

Nonetheless, he then proceeds to attempt to extricate himself, but not in an honest, manly way, but by being a little pussy-weasel-wanker.

So he boldface lies right to my face again, in an attempt to weasel out of the previous lie. What I said was:

I estimate 2 pounds because sustained weight loss from commenters in the past seemed to average 1/2 pound daily. [emphasis added]

Seriously, after this many times right out in the open, Denninger is simply a pathological liar. It’s tough to attempt even to characterize what or any level of moral integrity he might possess. Where’s the evidence for any? All we see is proof that character does not apply.

And after all of that straight up lying, purposeful misrepresentation, and then hubris when it’s pointed out to him, he has to go and write a long, useless, potassium-killz-u screed packed with misinformation…that’s falsified before he even begins by the extraordinary number of populations in tough times all over Northern Europe who survived mainly on potatoes, without a known case of hyperkalemia.

…Not to mention this relatively recent 57 page paper in the Quarterly Journal of Economics that mentions potassium one single time (the benefit of): THE POTATO’S CONTRIBUTION TO POPULATION AND URBANIZATION (2011).

Between 1000 and 1900, world population grew from under 300 million to 1.6 billion, and the share of population living in urban areas more than quadrupled, increasing from two to over nine percent. As shown in Figure I, the increase accelerated dramatically over time and occurred almost entirely towards the end of the period. The determinants of these phenomena have been of much interest to economists, demographers, and historians alike.1 This study uses country-level historical data on population and urbanization to empirically investigate the extent to which this historical increase is due to the introduction of potatoes from the New World to the Old World, by which we mean the entire Eastern Hemisphere. 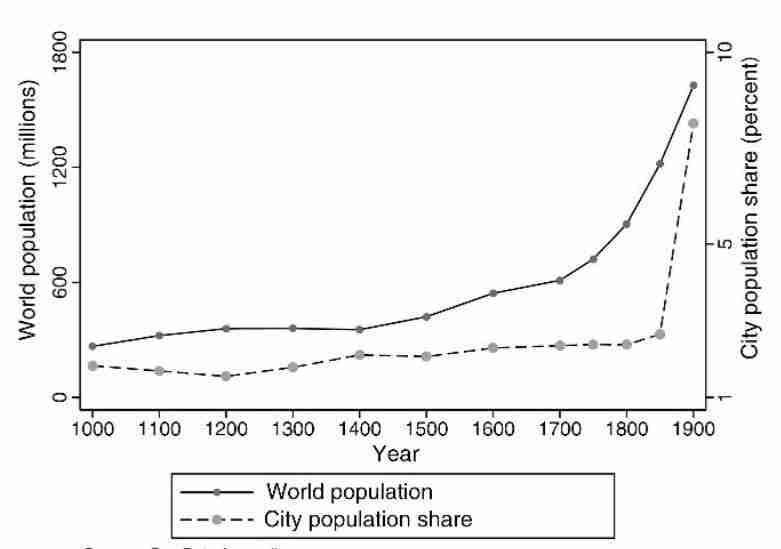 Potatoes provide more calories, vitamins, and nutrients per area of land sown than other staple crops. The potato’s role in increasing population and promoting economic development has been a subject of much discussion amongst scholars across a variety of disciplines (e.g., Langer 1963; McNeill 1948, 1999; Salaman 1949). For example, historian William Langer (1963, p. 14) argues that within Europe, “the spread of the potato culture everywhere corresponded with the rapid increase of population.” Potatoes dramatically improved agricultural productivity and provided more calories and nutrients relative to preexisting Old World staples. In The Wealth of Nations, Adam Smith extols the advantages of potatoes over preexisting staples in Europe, writing that “the food produced by a field of potatoes is… much superior to what is produced by a field of wheat. . . . No food can afford a more decisive proof of its nourishing quality, or of its being peculiarly suitable to the health of the human constitution” (Smith 1776, pp. 67–68).2

Similar observations have been made outside of Europe. A particularly interesting example comes from anthropologist Christoph von Fürer-Haimendorf (1964), who argues that the introduction of the potato into Nepal significantly increased food production and agricultural surplus. He writes that “the population of Khumbu was a fraction of its present size until the middle of the nineteenth century and there can be no doubt that the great increase of the last hundred years coincided with the introduction and spread of the potato” (pp. 9–10).3 Another example is from the famous Japanese scholar Takano Chôei, who wrote of the benefits of the potato in his 1836 treatise Ni butsu kô. He argued that extensive cultivation of potatoes would cure many social ills of the empire by alleviating food demands from a growing population (Laufer 1938, p. 83).

Can it get more amusing than this? Perhaps. You decide.

Alright, enough of this nonsense. Plus, I just found that paper, and now I’m far more interested in reading the other 55 pages than in further wasting time on the likes of some kinda Karl Denninger.