No, not this one.

The other day when I was interviewing Angelo Coppola on the Podcast about a more low-animal, low-fat version of Paleo, one of the items of discussion that came up was the “Paleo” liberal use of highly refined oils (coconut, olive, ghee, etc.). Refined oils have almost zero vitamins or minerals, but often get used quite freely, just as many SAD, vegetarian, vegan, and low-fat dieters use empty-calorie sugar, instead of a whole-food source of carbohydrates such as fruit, raw honey (high in gut-beneficial stuff), maple syrup (high in essential minerals, like iron-inhibiting manganese), a tuber, or squash.

So I got to thinking. How about instead of using any refined or even rendered fat, I instead use the fat in my meal as my complete cooking fat? I wanted to cook a bacon, egg, and fried-potato breakfast using just the fat from one rather lean, thick slice of applewood smoked bacon (Hempler’s, if you’re interested…excellent stuff).

This is actually fun. Put the frying pan on high, add the slice of bacon in the middle. After a minute or so, it will sizzle, and fat will begin to render. Now turn it to medium-low or lower as the bacon cooks and the fat begins to render. Tilt the pan to collect some of the fat and toss your onions into that, and place your half clove of garlic cut-side down in some of the fat. Turn the bacon often for even finishing.

Once the onions get singed, add the potatoes, get as much of the bacon fat onto the potato and onion mixture as possible. Season with salt & pepper. Once the bacon is done, remove it to your plate, turn the heat to high, and cover the pan for 2-3 minutes to heat, crisp and moderately desiccate the potatoes. Remove lid and keep turning the potatoes, onion, and now your clove of garlic (it may have separated a bit, but leave it as the whole pieces) until it looks like my photo, below.

Turn heat down, drop your egg, cook as you like. I’m using my fantastic T-fal high-side non-stick fry pan with lid. This has been wonderful for me for cooking with the whole food fat mostly, or very minimal processed oil or rendered fat.

Here’s what I got out of it. 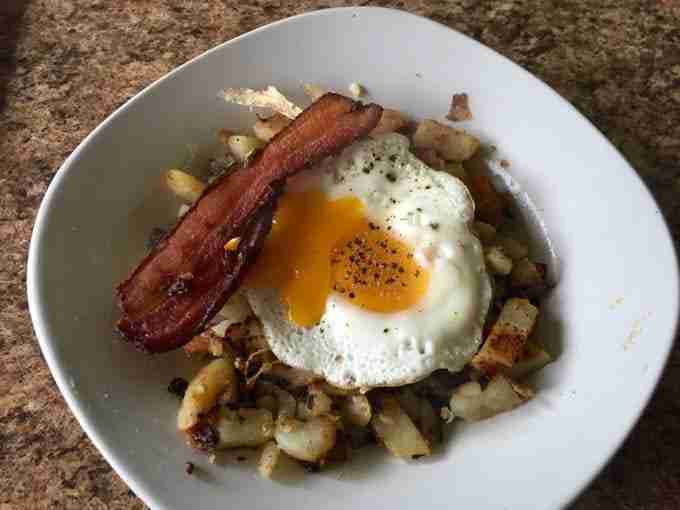 Now perhaps some think I’m really starting to sound ridiculous, and I get that. I’d be busting a gut a few years ago. But I can’t help but notice how damned enjoyable, satisfying, and tasty this was, and it left me feeling great. I’ve probably eaten over 1,000 breakfasts on various themes similar to the headline picture and not a single time did a 1,200-1,600 calorie fat-bomb breakfast like that not leave me feeling uncomfortable to various extents for hours later.


I adore bacon (or sausage, ham, ground beef patty, etc.), eggs, and fried potatoes (dark-toasted English muffin, if). It is perhaps my favorite meal combination in the whole world, and I’ve spent the last 40 years of my life usually making myself feel bad afterward, but always persisted because, like Ron Swanson…

And now I have a way to have it way more often, get all the pleasure I need, and no discomfort. As I often do, I like to see how it looks nutrition wise.

Now, you might think that 36% fat is substantial if we’re talking the levels Angelo and I spoke of in the podcast, but we were talking average, on a day or perhaps even a few-day basis. This was only 388 calories, 15% of an average 2,500 daily energy need for someone like me. Very easy to cover that with lots of potatoes, beans, or oats cooked low-fat style if I wanted to keep it low per Angelo’s plan. But look at the balanced nutrition distribution for a mere 15% of your food for the day.

I think people are going to see fantastic results on anything 20% fat or less on average, in a whole food context. Whole foods are the key. This is not the 20% low-fat-fad of the early 90s, via buying processed low and zero fat products in bags, boxes, cans, and jars.

This is actually fun to do, and there’s plenty of flexibility to have meals here and there with plenty of whole-food fat in them.