Just Let Life Get In Your Way And Embrace All Experiments

It’s safe to say that for me, the last year is probably filled with more upheaval in my life than ever—and I’m someone who has moved lock, stock & barrel—with cars (and a crotch-rocket) and furniture in overseas shipping containers—no less than four times…US –> Japan –> US –> France –> US.

In the interim since that final return in 1992, I started a 100% self-financed company in a spare bedroom that reached 30 employees in 7,000 sf office space, and I ran it with an iron grip for over 20 years, until I shut it down a few years ago. I might want to start a new company again, someday; but it will have to be something very special…something I can’t not do. The regulatory mess and red tape and bullshit make it less than appetizing for me. More trouble than it’s worth, really, and in spite of $15 million in paychecks signed by me, pride & joy thing. I don’t mind a fight, but I prefer battles that turn on character and will, rather than on thugs and force, with guns and badges. I got tired of paying fucking high-power, connected attorneys $250K per year as a business-license fee.

About a year ago this month I went off for a week to Cabo San Lucas, to stay at a vacation rental I own and rent out in a new, top-rated resort worldwide (I also have a studio). Beatrice, my wife, came out to join me for a few days at the end. When I picked her up at the airport, she looked at me and said: “you need to live here.” So, with her support, I began looking into something to potentially establish an expat foothold where she and doggies might end up as well.

Those who read the history have a whiff of an idea as to what happened. While pussy boys (always pussy boys) chide me in both comments and email, it was simply a failed experiment—one that none of those pussy-boys have ever come close to. Pussy boys, being pussy boys, jeer from the bleachers of life…It’s how they go about attracting stupid women. Anyway, I had the temerity to question a bunch of rich, social-justice warrior cunts in the Lost American-Canadian Suburb (ideologically gated) of Los Zacatitos.

You see, this is a magical place where meteorology doesn’t suffice or necessarily hold true. This is Baja! Has to be Mexican meteorology. You can imagine how that played, with me.

…Far from being like all the other males being led around by attitude-cunts, habitually clicking Like on every heart-warming fart one of the rich bitches might happen to post on Facebook—’cause they feel so deeply about everything in which they have neither the wherewithal, temerity, spirit, will, drive, or ability to do fuck-all about except spend the money they do have, but never do, and only seek to force others—I was telling them that they’re idiots in various ways, alienating them too, ultimately. They knew where their bread was buttered.

The males of Lost Zacatotos never grasped that all the social-justice victim, better-safe-than-sorry crap at any expense—and more—was a function of spoiled brat women who rule the roost, there. Women who do nothing but spend their accomplished and successful husbands’ money in order to then use their faux prestige and pressured privilege to undercut the very gift horse feeding them, on levels of business, economics, and philosophy. It’s nothing new.

…Ironically, my best friend in the community—one of the biggest power-cunt lickers by far, wanting to be friends with influential women because he knew that’s what it takes—was on the anonymous run from his German-Canadian ex-wife, who while never having a hand in the trucking business he created and ran in Toronto, nonetheless sucked $3 million from him. He had zero troubles with vison-resolution on that score. He was simply incapable of discerning levels of the very same thing all around him.

Some men never learn the true essentials of what they’re dealing with.

In the meantime, I took what I learned there for off-grid living, came back, and found a sweet deal. I’ll let the pics talk. 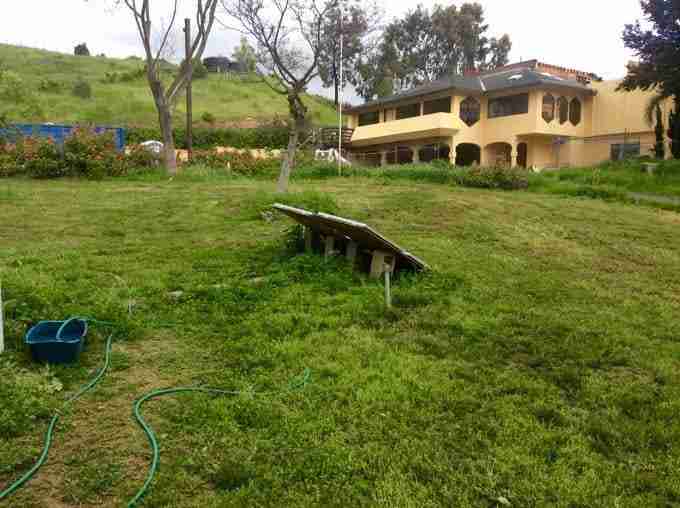 The grass was 2 feet high. Careful mowing around the solar panels. 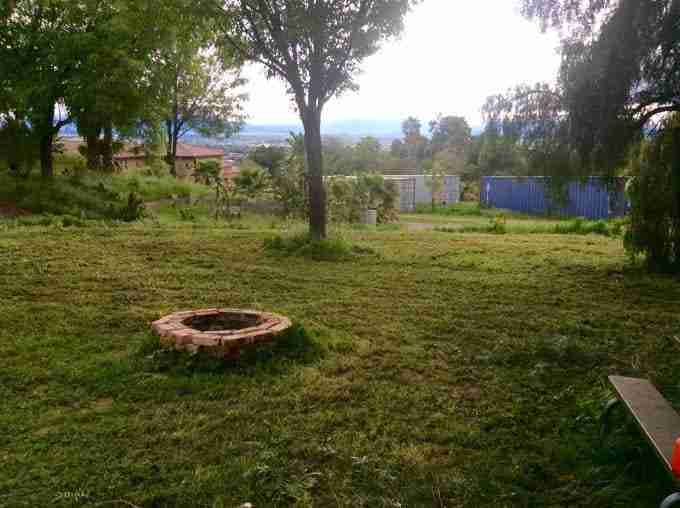 Built a fire pit from brick collected around the property. That was after the mowing, pre weed-whacker. 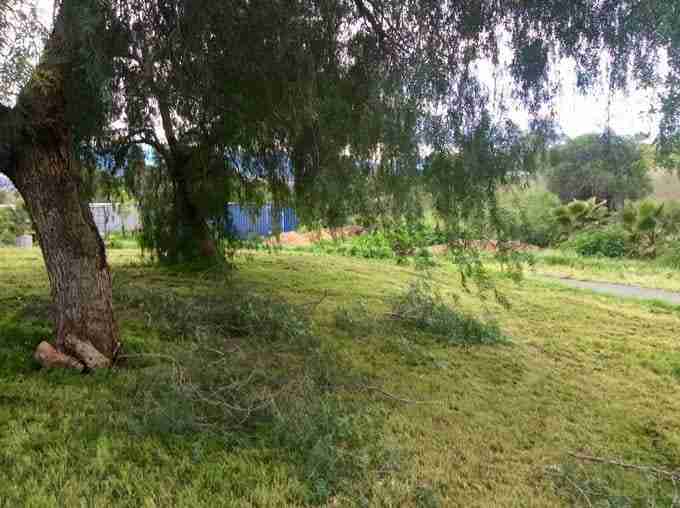 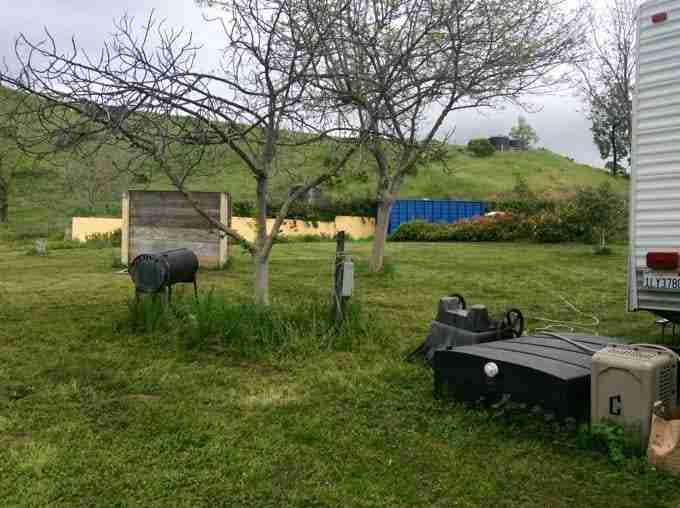 Big space to mow, after the rains and a suitable dry off period.

At this point, I do not want you to freak out. Other than three dinners per week so the lean wife can otherwise get along, it’s potatoes, oats, and beans, mostly. This represents two weeks of those meals and includes a single dessert. 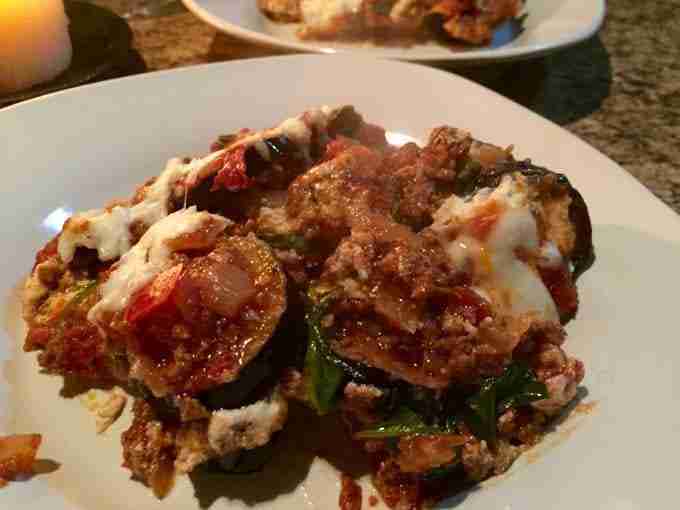 Eggplant parmesan. Duh. Make sure you give yourself, at least, two hours to heavily salt the eggplant, and drain it out. 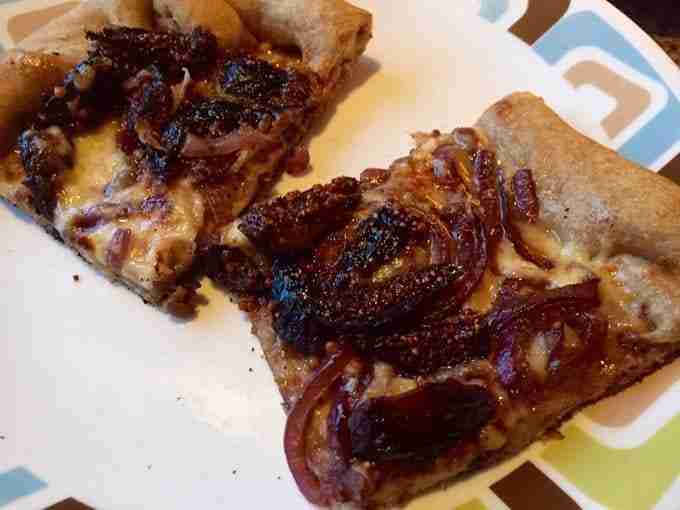 While my favs are still pepperoni (with onions or olive), or, Canadian bacon with mushroom, and I dislike combination pizza, this was fun. Whole grain crust, balsamic reduced figs, and pickled and caramelized red onion with a few Italian kinds of cheese, no sauce. It’s the first non-meat pizza I’ve made at home or ate. Didn’t give me heartburn, and pizza does it more than any other food. 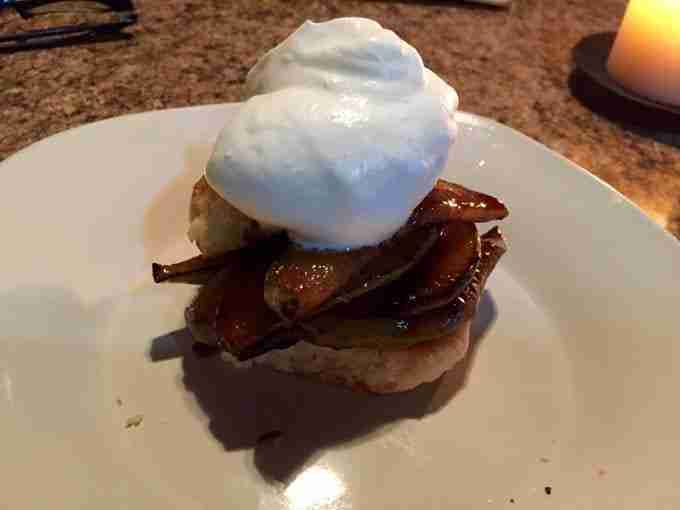 Made a dessert last week, the only in two week’s time, so don’t go off the rails. Caramelized apple shortcake, and yes, I whipped the cream by hand. You should always whip the cream by hand. It makes you go blind, so your next self-indulgence will be days away. 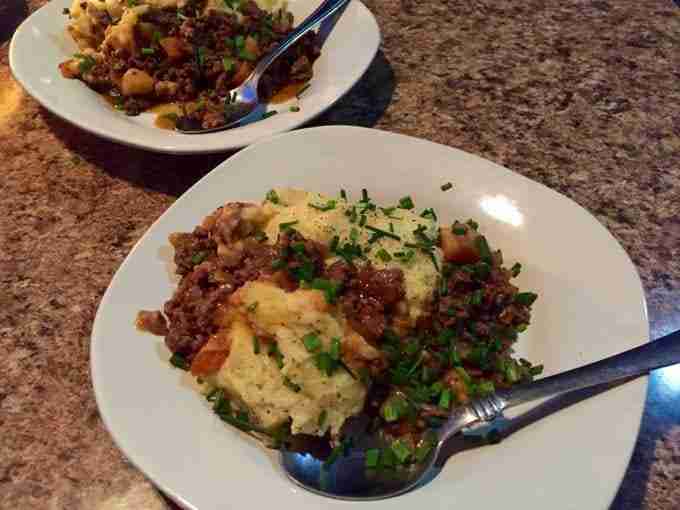 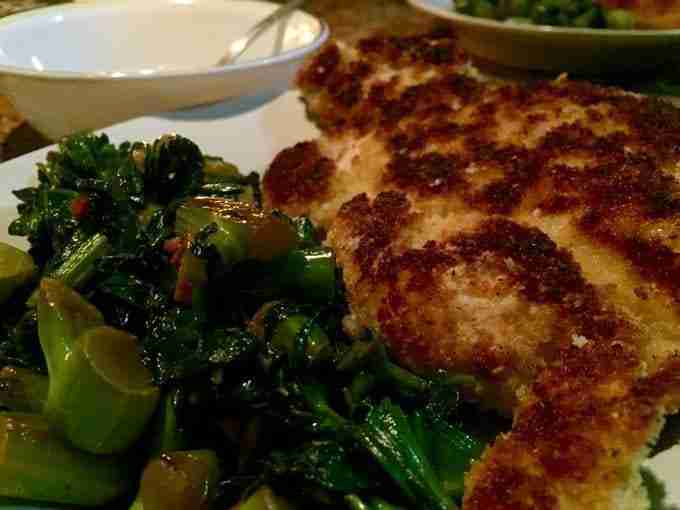 Panko crusted pounded chicken breast. The audacity of the accompanying greens speak for themselves. Oh, yeah. Did a horseradish aioli sauce for the chicken. 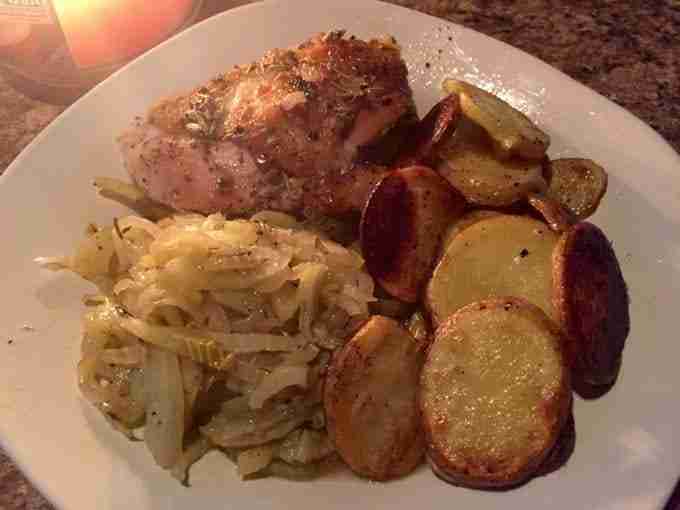 A skin-on chicken breast with a mix of whole herbs & spices. A complex dish to cook. First, you saute the onion and fennel (set aside), then you sear the chicken breast, no oil, skin side down (5m). Toss some Yukon Gold potatoes with EVOO and S&P, and place them on a cookie sheet, along with your pan of mostly raw chicken (flipped over) and other root veggies. 15m at 450.

In all cases, pics some day coming.

Just go your own way out there, but make it your own. And use your fucking brain.