I’ve been meandering back to some of my roots, lately. Maybe you’ve noticed. I’ve been getting way more interested in preparing good food regularly for just one example. Here’s an unfinished project. I’m putting up some of my homemade stuff on Pinterest.

For another thing, I have a blog redesign in the works. This is ancient history, but Alec and his beautiful Foliovison Team in Bratislava moved this blog from TypePad to WordPress in about 2009 and hosted it on their servers until around 2014. We had a difference in management philosophy and so, I moved it away—but still retained them for urgent tech needs now & then. Anyway, I’m back to fully managed hosting, and Ivana is leading on the tech (when the blog is a dozen years old, there are always issues). As part of the package, they’re setting me up with a new theme and look, led by the Canadian expat himself, Alec—who always seems to self-cultivate just the right amount of hubris regarding stylistic elements. I’m very anxious to see what his keen eye has in store for me. I’ve unequivocally extended Carte Blanche to his strong disposition in this matter. Never micro-manage. Find competent people and let them loose.

…I’ve been meandering as well in the drafting of my Stupid Dog Brian post. Learning so much myself, using potatoes as my primary food.

…Bea and I are heading out of town tomorrow morning for just an overnight down south in Malibu. Sisson is having a launch party for some new goodies in his Primal Kitchen, and we’re both excited to attend.

Let’s get to some food. Here was Friday evening’s dinner. 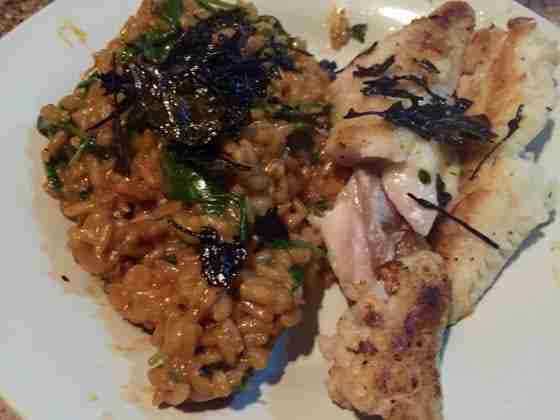 Never skimp on doing risotto the right way. Two core and critical elements to get it al dente yet creamy: first, you have to stir it nonstop for 20 minutes. There’s no fucking shortcut. Second, you must use a flavorful broth, preferably an unsalted one that you’ve reduced somewhat to concentrate flavor already. You bring it to a simmer and add it hot to your risotto a soup ladle at a time, stirring until fully incorporated, then adding another, etc. At the point it goes right beyond chewy, you’re done. Stop!

Speaking of making stock, this is not what I used in that risotto. But I surely could have, and I’d advise you to try various stocks—mushroom stock for a sautéed mushroom risotto? Kitchen Basics is the best off the shelf. Take my damn word for it and shut up. I’ve tried every single one many times. KB is by far the tastiest and has an immaculate ingredients list. Just buy KB and shut up about it.

This is “freezer stock.” I know some of you understand me. 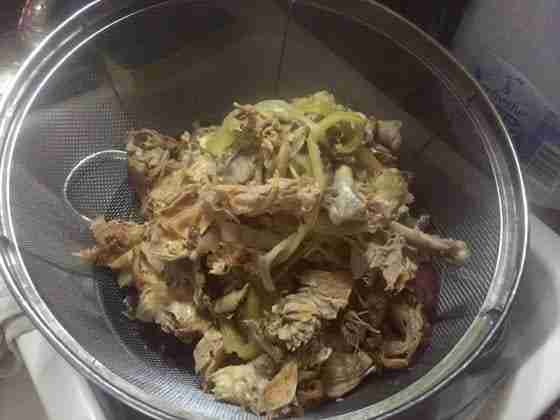 It’s all the chicken carcasses (four of them in this), bits of leftover meat, bones of various species, and vegetable ends and peels.

Toss it into a pot, add water, cover and boil for a good six hours. Here’s where I see so very many go wrong, which I chalk up to an irrational exuberance for fat by people who don’t fucking know how to cook properly. Just because fat is fine, lovely and delicious doesn’t mean you want to fuck up your stock with off-taste-alien and texture, which you may want otherwise for various applications, other than fat guzzling.

If you must later, bring whatever you need for a particular application to a boil, add 1-2 pounds of Kerrygold butter, and take the stick blender to it. Call it “Bulletproof Stock” and drink up. 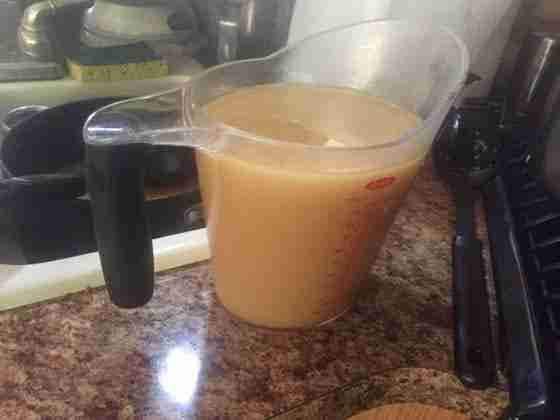 Get one of these. You can even save the fat for other applications. It does not belong to a proper stock or broth. Take the time and effort and do it right.

In this case, the total amount rendered—being about two and a half of those separators—was perfect for another pot of my potato soup for the week. 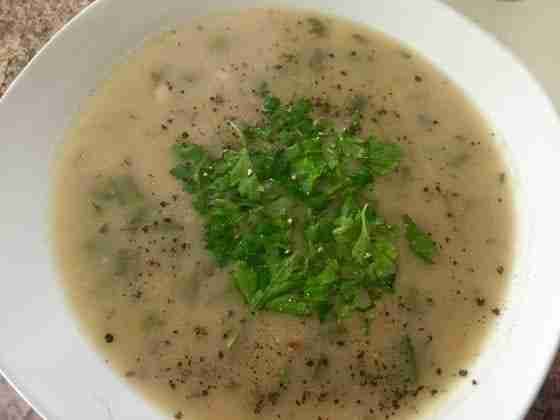 Same basic recipe per the link above. This one made with all the homemade freezer stock, no water. Also, just one yellow onion instead of two, with a bunch of green onion or scallions, chopped and added at the very end, with the milk. Finally, also, added to the two TBS dried parsley, is a half bunch of fresh, and using the rest for fresh garnish with each bowl.

I have a lot more to say about my potato soup vis-a-vis Stupid Dog Brain. How it possibly could help some, but maybe hurt others. This has been the chief reason for my delay in posting. Has to be original, and well thought out. It’s getting there. 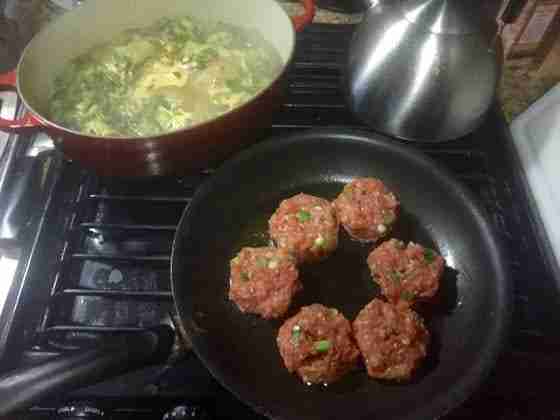 Vegetable stock, Bok Choy, ginger and soba noodles to the upper left. Infused with star anise for that extra touch, and a bunch of baby spinach goes in at the end. To the right is wild fresh ground salmon, mixed with fresh ginger, sesame seeds, scallions, sesame oil, and panko crumbs.

I can’t decide which finished product pic I like best, so here’s both. 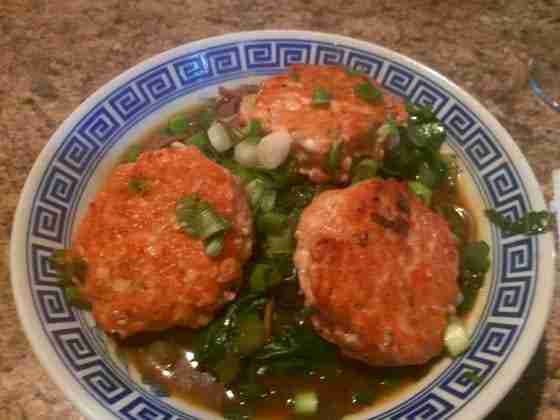 OK, not sure when I’ll be back again, only that I will be.