This post wasn’t expected (again). But I got some interesting feedback, so I’ll save my “Your Stupid Dog Brain” post for soon. Quick general recap of my process, thinking, methods so far:

That last post is the one with the practical stuff, including an amazing low-calorie, low-fat & protein potato soup to up the palatability for those who can handle it and have solidly whipped and lashed their Stupid Dog [Brain]—or for between serious “hack” sessions, or just normal maintenance mode. Otherwise, No Soup For You!

That last post also contains a significant section on the 13-pound weight loss in the first four days, with an update for day seven—another 4 pounds for a total of 17 by last Sunday at the one-week point. Since then, every day except perhaps one (Sunday night; Oscars; Pizza…lots, about 2/3 of a large…zero heartburn; probably a first, since college days) has been a big caloric deficit of 1,000+ per day. The only other non-potato-oriented meal was Monday dinner (nothing but potatoes during the day): 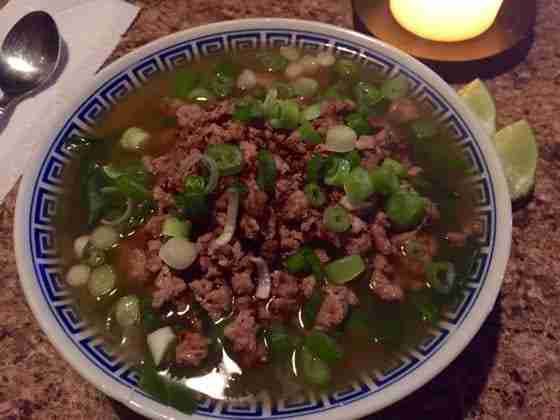 Yesterday was an ordinary potato day. Total of about six decent sized reds, and 2.5 ladles of my soup for dinner. I then proceeded to unexpectedly fast for long…18 hours in total, from dinner to what I ate earlier today. Hit the gym in the late morning, at about the 16-17 hours of the fast. Just a quick word on workouts. Being far beyond all the heavy stuff from the past, including Leangains, I’m very satisfied with Doug McGuff’s Big-5. Takes 15 minutes and currently, I’m doing it every three days, each exercise a single set: 25-30 rep range or 2-2.5 minutes time under load (TUL). I’ve progressed on every single exercise on each of the last four sessions since I started this potato thing, returning to the gym on the very same day. I intend to progress to a 15-20 rep range, 1-1.5 minutes TUL. And that’s it! Nothing more required or desired. Now & then I’ll toss in an additional exercise, such as the dip machine; or today, the peck deck. And I also play around with the Battle Ropes and a Medicine Ball in the yard, sometimes.

Weighed in. Ten (10) pound gain from 3 days ago, Sunday. Wow. Disappointing? No, of course not. I was wondering when that huge water dump was going to mess with me. Now it has. In what world is 7 pounds net loss in 10 days a failure of anything? If anything, it adds more credibility to the whole process in my view and reporting it is essential for trust. Remember, this is weight loss and if you are on a program that works, are very reasonably consistent with it, and then it looks like this (and if you look closely, there’s the potato soup recipe again). 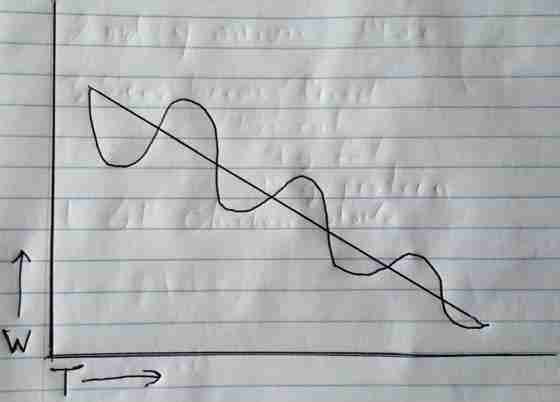 Let me briefly address the factors that may play a role in this temporary pendulum rebound.

But mostly, we’re talking about the body’s complex way of retaining and shedding water. In that respect, big swings over short periods of days are always mostly water related and “wash out” everything else, whatever the underlying cause(s) of the water shift. Also, another bottom line is that my mirror image is way better, and pants are significantly looser than 10, or even four days ago. The progress marches on and one thing to be sure of, given the caloric deficit, none of that gain is fat accumulation.

So now let’s move onto blood glucose. Yesterday morning, before even thinking about all of this because I had not weighed yet, I got out my OneTouch UltraMini to do a fasting measure. But after a dozen tries on the highest setting with that sissy-girl lance they include, the best I could get was a light pink “hematoma” the size of a . So I went to the Pharmacy and got a proper, man’s man lance; one that serves up a good and just sting, and renders enough blood for the wasting and spilling of blood, the ultimate envy of all real men…

When I was paleo Low Carb, fasting BG was never below 110, and after a long fast with a workout, 115-125 was typical. Not so much now, since I’ve also been taking my glucose metabolism to The Potato Gym for regular exercise. Then I ate, though scarfed is a better description. I made a batch of basic mashed potatoes: 2 pounds of peeled russets (I used the previously boiled and cooled, from the fridge), 2 TBS butter, 1 Cup of whole milk, salt & pepper. 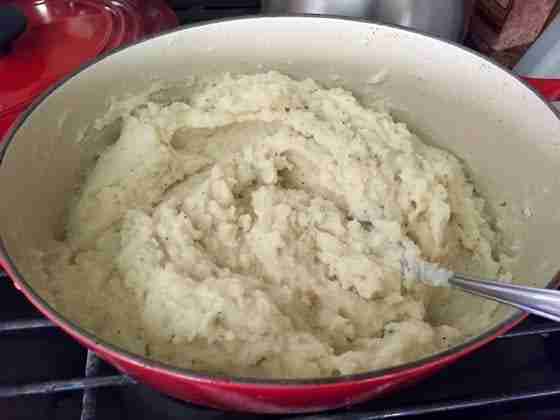 I ran the nutrition of the whole thing, including precisely measured butter and whole milk.

Is that a beautiful nutrition profile, or what? Some of just about everything, lots of a few. It’s only 1,130 total calories but look what it does for your nutritional intake for a day, at half or less of the average daily calories you need for maintenance. I ate exactly half of it, so 565 calories worth as a single and complete meal with water. 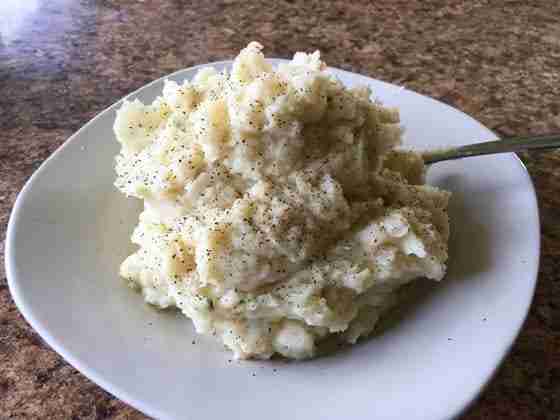 I scarfed that whole Close Encounter of a Third Kind in five minutes flat. Then I waited 30 minutes to check BG.

Not sure when it returned to under 100. I’m not a fanatical kook about this stuff and in fact, this is my first BG measure since pre-op, last May 2015. Almost a year. I didn’t die and looks as though while not yet pristine, is way better than LC days where an infrequent meal like that would render an acute BG spike of 220+ and would still be way high hours later. Looks like my BG metabolism requires still more trips to The Potato Gym for a little exercise. My primary interest is in seeing if it gets better and better while—owing to the hefty caloric deficit with little to no hunger the heavenly potato diet graces—I continue to shed liver and pancreas fat which is probably the real and fundamental cause of poor BG metabolism, even clinical diagnoses of diabetes.

Here was the dinner last evening, via Plated.com, 6+ hours after the potato meal. 650 calories. 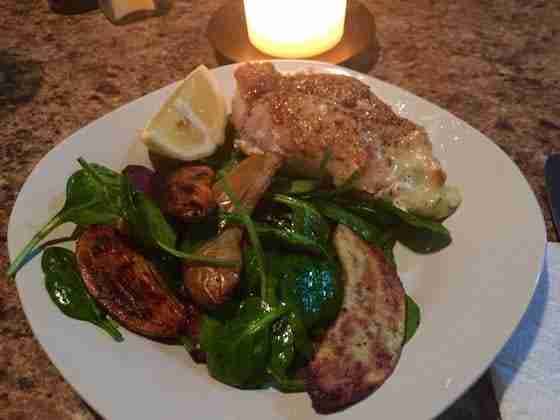 So, my total day of calories after a good 18-hr fast was 565 + 650 = 1,215, which is about 1,300 under my standard maintenance of about 2,500. And all with no hunger once I broke the fast. Tell me again how it’s possible those 300 grams of carbs for the day are going into fat cells via de novo lipogenesis—and believe me, lots of LCers have been telling me exactly that, a sign of how poorly informed they are by the gurus…or conveniently misinformed.

About 15 hours from the last bite of food from that dish, I for once had an “early” meal around 9:30 am. Not because I was particularly hungry, but because I want to set up a different test with that leftover pound of mashed potatoes. 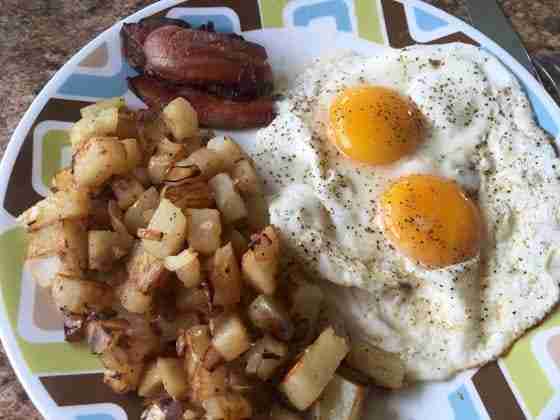 Balanced Breakfast. BG was 147 at 70 minutes after finishing (got busy and forgot to test at 30 and 60 minutes.

Notice the tradeoff. Eggs being the constant, we have potatoes, a starchy carb in abundance on the plate (that’s one whole baking size russet from the fridge), combined with a sound and sensible reduction in bacon. It’s 1 1/2 slices of thick cut. If it were thin, I’d have done two slices. Now compare that with the average breakfast cafe where it’s even more rancid-franken-oil laden hash browns (more cross-section to soak up lots of more fat) and four slices of bacon, plus two slices of toast with butter or margarine for another 300 calories, minimum. And people are mystified why everyone is fat. In this case, I fried the bacon first at medium-low heat, then fried up both the potatoes and eggs in the ~1 tsp of bacon fat rendered. No other added fat.

And people are mystified that everyone is fat. It’s the carbs!!! A carb is a carb!!!

Anyway, what I intend to do is when I get hungry this afternoon, I’m going to heat up the pound of mash and repeat the BG testing. We’ll see how it goes, a fasting test vs. a fed test.

Update: Well, At the taters around 15:00. 30 minutes after eating, BG was 123. Unfortunately, I got on a long business call and missed the other measures. So, next time.