Using The Potato Diet to Leash Your “Stupid Dog Brain” 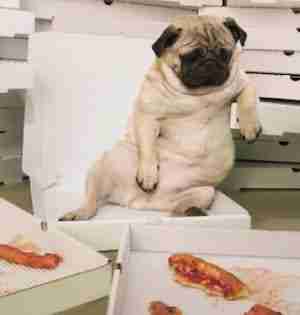 Back when I was drafting this big post on the practicalities of The Potato Diet, I was already receiving comments on some other posts that caused me to add this blurb:

“So, my conclusion is that boiled potatoes occupy some outlier niche where they’re mensch enough to give your stomach something substantial to feel, palatable enough to eat without choking them down (I drink plain, room temp water with them), but not so palatable that you’ll just normally gorge on them. In other words, when your stomach feels as though there’s enough of them in it, the palatability feedback shuts off, and you push it away.

“And this suggests a potential cure for those few people who, in spite of eating lots of boiled potatoes, nonetheless feel ravenously hungry an hour later. What to do? Then you eat another potato, plain, no salt. Still a problem an hour later? Then eat another one, stone cold out of the fridge. In other words, every time you get that deep hunger eat the most unpalatable cold boiled potato possible until you’ve whipped your dumb dog brain into submission.

“And verbalize it. “Ha, you stupid dog brain! You thought you were getting chocolate cake and ice cream, didn’t you? Ha, you dumb dog!” See, it’s rather like training your dog not to beg at the dinner table immediately after you fed him first. Sure, you can try to shame and submit him, order him around, etc. But what if you give him something off the table he doesn’t like at all?”

I thought I might like to expand on it, but just a bit, because it turns out to have been pretty well hashed out in numerous comments. I don’t want to call anyone out, but I was getting a few comments here and there from folks who claimed that even a short time after eating large portions of plain potatoes, they were ravenously hungry. In one case I recall, the guy had eaten ten potatoes (I’ve never eaten more than three medium russets in a single sitting, and when I have, it’ll usually last me at least four hours). In another case, someone ate 12 pounds of them in three days and was “starving” all the time. Someone else was eating them all day long and got climbing-the-walls hungry within 30 minutes.

Let’s look at some particulars. 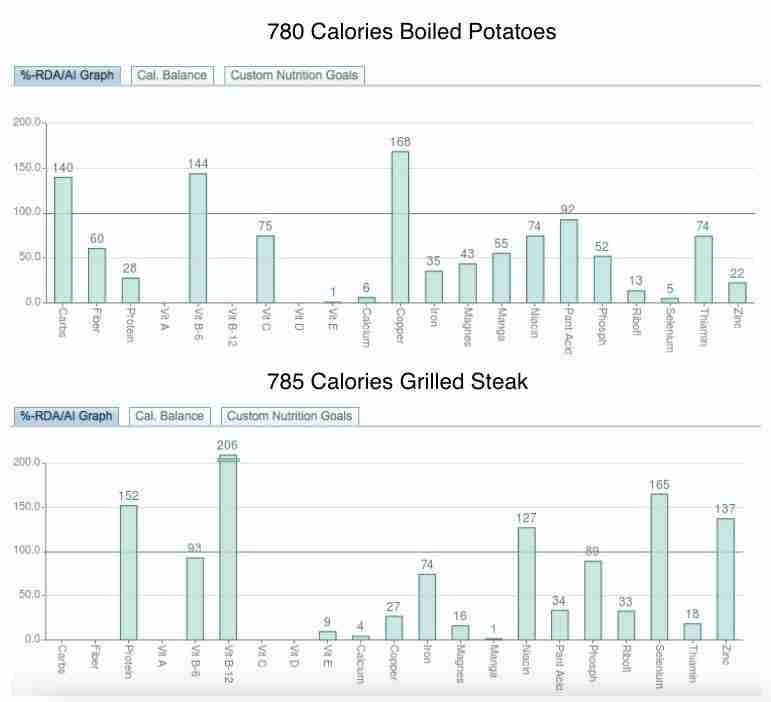 Not so ridiculous now, is it?

Remember that? Initially, I did that to dispel the myth that potatoes are “empty glucose calories” and that, in fact, they stack up damn well against red meat. Toss in or trade off calories for a cup of whole milk and you’ve got pretty complete nutrition.

But there’s more to this story. That is, you simply can’t make a claim that your body is somehow yearning for some critical nutrient on a hour-by-hour basis on plenty of potatoes. You can’t trust your Stupid Dog Brain. And added fat isn’t going to cut it either. Let’s look at a couple of those.

Now, who again wants to tell me that “potatoes are empty calories,” or, “just a bag of glucose?”

At least, butter has a little actual nutrition owing to the milk solids, which also makes it about 15% less calorically dense than pure oil. All I ask is for a little consistency. If you’re going to denounce sugar as the nutritionally-vapid ugly stepchild of the carbohydrate neighborhood, then the very same thing ought to apply to pure oils as part of the lipid community. Or, you can be reasonable. If a pat of butter or a drizzle of olive oil is OK in, on, or cooking with stuff, then so is a teaspoon or two of sugar in your coffee, tea, or sprinkled on your oatmeal.

But my principal point, getting back to our Stupid Dog Brain theme, is that had you instead switched out 400 of your calories for 50 grams or so of butter on your potatoes with the same calories overall, you would have had a lot less nutrition, but it might have satisfied your Stupid Dog Brain. You see, there is absolutely no difference between trading off that butter, or trading off some 400 calorie dessert to satisfy the dog. You can’t trust it. It’s fooling you.

I want people to think of it this way: so your brain “says” you’re hungry, but is it saying that you actually require food, nutrition? Is that deep, ravenous “hunger” real hunger, or just an irrational desire? And if it’s an irrational desire, given the facts of the matter, doesn’t that make The Potato Diet a certain sort of eating disorder intervention?

There’s perhaps nothing that gives you the resolution of just how stupid your dumb dog brain can get than this little hack, and it’s for this reason primarily that I’ve come around to Tim’s way of thinking, which is to at least do a few days of pure & simple. See what you learn about yourself. I know I learned a lot.

There are many approaches to potatoes in the diet that will have different people dropping pounds, provided they overcome stupid dog brain problems. And there’s nothing like this little intervention to shine a light on that for you because you can get the facts and know that potatoes are an adequate, complete food you can thrive on and entire populations have done just that. Call it peasant food if you like, and I’ll call your spoonfuls of coconut oil candy with less total nutrition.

When eating a substantial portion, you can know it’s perfectly clean, sustainable, nutritious. It literally does fill you up, and when your brain tells you otherwise, you can be sure that it’s the problem. You have an irrational feeling your brain is causing for some reason, and it manifests physically, as gnawing hunger, just as John Sarno’s TMS manifests as muscle and tendon pain. Those familiar with John Sarno and his work on how the brain can cause real physical pain, called Tension Myositis Syndrome, might get a hint here at what I’m getting at.

I believe that for lots of things like this, and as it was for me with my own bout of TMS in the neck and shoulder, just knowing and clearly understanding it puts you on the path to recovery. You may not even need to figure out why your brain is doing it, just knowing about it is enough.

Some of you have your work cut out for you, and I’m telling you that potatoes are not your problem. Rather, they are your salvation and have already exposed what your problem really is.