Race To The Whitehouse 2016; Game of Thrones Version

Oligarchy:  a government in which a small group exercises control especially for corrupt and selfish purposes.

Let’s get something out of the way right off the bat. Nobody should be president. It’s a ridiculous notion and given the cheap con that “democracy” always was—and is perhaps finally festering to a boil—I’d just prefer monarchy. At least it’s honest about its status, and in case your oligarchic indoctrination by means of oligarchic schools run by oligarchic loyalists makes you automatically recoil at the very “thought” because you’ve been admonished to never question things of such nature, there are actually sound arguments that democracy was a step back from monarchy in a number of important ways.

In this tour de force essay, Hans-Hermann Hoppe turns the standard account of historical governmental progress on its head. While the state is an evil in all its forms, monarchy is, in many ways, far less pernicious than democracy. Hoppe shows the evolution of government away from aristocracy, through monarchy, and toward the corruption and irresponsibility of democracy- a long march toward today’s leviathan state. There is hope for liberty, but reversing the tide will not be easy. Radical decentralization and secession, Hoppe posits, are the last best way forward. This eye-opening monograph is ideal for sharing with friends. It will revolutionize the way you view society and the state.

An essential problem with democracy is its very con job nature. The illusion of control. 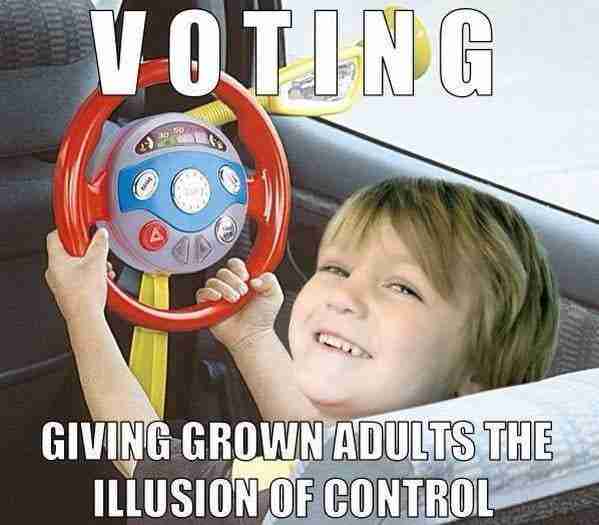 …You know. People standing in lines at poling places, making a big deal of it, filling out forms, punching and bunching ballots, and emerging proudly sporting an I Voted! sticker. Laughable. All that over a 1-in-300 million say in who’s ruling you next.

So no; democracy is an illusion, representative republicanism is also a farce, and we’re subject to an oligarchy where an elite, relative few pay to play and run the show. One of the things children are taught about in the public schools about the wonders of democracy and of the United States of America is that “anybody can be president.”

There’s lots of ways to look at this, but from an oligarchic-elite standpoint, we know that Clinton, Bush, and Rubio were the general anointed of the establishment elite, and that at least for a time, the ones also anointed by the main sleaze media—performing their assigned puppet roles in exchange for “access,” giving the illusion that this was really going to be some gobsmacking big serious contentious wizbang contest at the behest of “the people.”

What you can take from that is that the democrats at least have their power-elite feces-machine well oiled and consolidated. Not taking any chances with being Berned, they have a “superdelegate” feature, whereby about 715 of the total 4,770 (15%) convention delegates get to support “whomever” they wish, not bound by the voters in the state primaries. I’m sure it’s mere coincidence, then, that Der Hillary! got a head start of 480 – 40 of these supermen and women over the Bern essentially right out of the gate but in any case, late enough to give hope, while soon enough to dash it, keeping the illusion and voter delusion intact—the most important aspect of all.

See? LOL “democracy.” But it’s hard to feel too sorry for the ne’er-do-well Sanders, who was kicked out of a hippy commune in 1971 for sitting around talking politics all the time, eschewing actual work. Hoist by his own petard (in terms of seeking to turn America into a democratic-socialist utopia, where everyone sits around in free Che Guavara t-shits talking about la revolución), he’s feeling his own private Bern of redistribution in states where he’s won the most sheeple votes, but Der Rodham gets the redistributed delegates.

More and more, The Onion keeps getting scooped by events in realpolitik. Sanders’ ideology is one thing, but the elite understand that there are “practicalities” in play.


Turning to the other side of the imaginary line, we have the republicans. 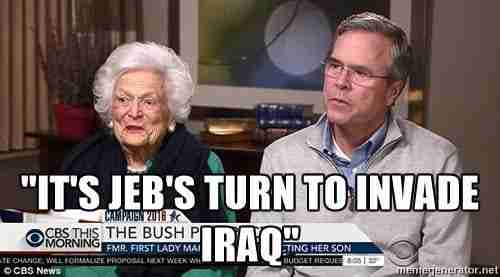 In what world did someone think “hey, I’ve got a great idea: let’s run a third Bush in the space of a quarter century!” Well, perhaps in the world of cloistered ivory towers of echoing choirs, or something. But it’s truly a laughing stock, when they raise over $160 million for the dude and depending on which state, it comes out to anywhere from $1,000 to $5,000 per vote he received. And their other pic, Rubio, didn’t fair a whole lot better and went down in flames fast.

And so we come to the one bright stop in this, talking oligarchic power and control, and that has to be Trump. And damn, that campaign finance deal above is from April 20. $50 million from himself, about two mil from donors. If that isn’t repudiation, then the word needs to be redefined. Think what you will about Trump, and que sera sera, but I still think his candidacy really tosses a monkey wrench into this whole oligarchic thing. Does it represent any sort of political revolution in America? Who knows, but it’s the best I’ve seen since Reagan was not initially any favorite of the power elite.

I blogged about Milo Yiannopoulos the other day and while nobody seemed to care, he, combined with Donald Trump, represent a completely new sort of devil-may-care politics, and it’s not one that panders to legions of do-nothings, victims, hurt feelings, social “justice” warriors, or any of the other sorts of dependents the democrat-side of the oligarchy fosters and nourishes with rhetoric, false promises, faux compassion, or any of the other con job shit they engage in. So while Sanders did represent a challenge of sorts to the established consolidated powers, it was a sort of rocket ship left rather than the high-speed rail to hell we’re already on. Realpolitik, again.

…So Season 6 of HBO’s Game of Thrones begins tonight. Perhaps we ought to borrow from it. Call American presidential races what they are, and just go ahead and install a throne.