Reconstructing Garlic As A Whole Food

There are a lot of opinions about garlic; I’ve learned. Probably lots of hype, too. It does seem clear that there’s a lot of medicinal value to the stuff, and its use as such appears to go all the way back to ancient Egypt.

But what’s hip and what’s hype? What compounds are the ones that are responsible for the wonders and how do you consume it?

And on and on, and my answer is that I’m not sure, but there seems to be no end of conflicting sources who are absolutely sure—in ALL-CAPS with multiple exclamation points!!! So the obvious answer for me is to stop the unbridled deconstruction and eat garlic in all sorts of ways. Cover all the bases. Plus, it’s enjoyable in all kinds of ways. 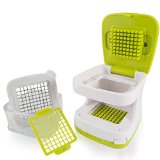 Many of you already do that and have done so forever. I’ve always enjoyed the taste and smell of garlic when it’s mild, and I’ve used it in many different ways in cooking going way back. I’ve taken garlic supplements with allicin at various times. I’ve eaten it in various ways, and I’m sure it’s beneficial in some of them, as they claim, but I’ve never detected a benefit where I could say with any certainty wow, that’s the garlic!

But now I can. And I think if you give this a try, you too are going to say ‘wow.’ It’s kind of remarkable and in many ways and levels, unmistakable. At least to me.

I’m talking about swallowing whole cloves (small ones) and sliced in half lengthwise (large ones).

Some time ago, during all the resistant starch and gut health posts, one commenter, in particular, used to go on an on about eating raw garlic and how addicted he was though I don’t recall him saying how he consumed it. It always stuck in the back of my mind, but I never really did anything but continue to use garlic regularly in cooking, sometimes minced in a salad dressing, etc.

One day I got wind of this paper from way back in 2001: Preventing the common cold with a garlic supplement: A double-blind, placebo-controlled survey.

One hundred forty-six volunteers were randomized to receive a placebo or an allicin-containing garlic supplement, one capsule daily, over a 12-week period between November and February. They used a five-point scale to assess their health and recorded any common cold infections and symptoms in a daily diary. The active-treatment group had significantly fewer colds than the placebo group (24 vs 65,P < .001). The placebo group, in contrast, recorded significantly more days challenged virally (366 vs 111,P < .05) and a significantly longer duration of symptoms (5.01 vs 1.52 days,P < .001). Consequently, volunteers in the active group were less likely to get a cold and recovered faster if infected. Volunteers taking placebo were much more likely to get more than one cold over the treatment period. An allicin-containing supplement can prevent attack by the common cold virus.

Those are some pretty damn significant differences. So I got a supplement specifically with the allicin in it. I take a couple per day. Haven’t had a cold since (had a bad one in the fall before doing this), so there’s that. Of course, that’s pretty much the norm for me. Ever since supplementing with vitamin D3 and also K2 vitamin way back, colds are pretty rare. Anyway, it’s reasonably priced, so it’s on the list of a few things I take on some, but not all days.


I kept thinking about the commenter who just swore by eating garlic raw for gut heath. So I had an idea. What if I just peel a few small and skinny cloves, and swallow them with the rest of my supplements, like pills? So I did. And holy shit, and I mean that very literally. It was quite remarkable. I don’t like to get heavy into the TMI, so just try it yourself and you’ll see what I mean. Don’t be surprised if you’re asked what you’re cooking once you exit the bathroom in the morning.

The next day I mixed it up a little bit. Two small skinny cloves whole, and a couple of larger ones sliced lengthwise in order to make them swallowable without choking to death. Holy immaculate shit. So that’s how I do it now, typically about four cloves each morning, on a fasted empty stomach, mostly sliced in half lengthwise with one or two small whole ones some days. The idea is to have them whole enough that they only get partially or minimally digested by enzymes, and so more of whatever goodness is available for gut bacteria in the colon gets there first.

But otherwise, after a few days of this, I felt remarkably awesome, and that continues. I very quickly was experiencing energy and motivation levels that I hadn’t for a while. See, everything I research on garlic, like this—Comparison between swallowing and chewing of garlic on levels of serum lipids, cyclosporine, creatinine and lipid peroxidation in Renal Transplant Recipients—is all about what sort of things it’s doing to standard human biological phenomena, and not what it might be doing to gut flora which in turn has human biological downstream effects.

Anyway, I highly recommend it, and I’ll probably also crush the garlic, wait 10 minutes as some insist upon, and do that some days as well. Let me know your results in comments. And be careful. Don’t choke yourselves to death out there.