Just Another Chapter. They End. They Begin.
Cooking In An Off Grid RV With Plated And Blue Apron

Butter and coconut oil are becoming the new sugar.

The pendulum swings from one extreme of processed food to another, to other sets of elements that are extracted from whole foods; they’re concentrated, and rendered unrecognizable to the body in terms of evolution where human biomes dealt with foods in whole forms.

Am I undercutting the “Paleo” narrative on its own terms: hoisting it by its own petard? You get to judge.

There’s of course nothing more bad or wrong about pan frying with a bit of butter or coconut oil than there is a teaspoon, maybe two, of sugar in your coffee or tea. And there is something to the “everything in moderation” meme, but it’s not every thing.

You’d have your processed meat & fats—artisan cured meats, sausages, salami, bologna and down the line; true whole grain fair, and on and on, in moderation…along with sugary stuff, like the artisan cane-sugar soda pop I have now & then, or a nice French pastry, etc.

Not Hot Pockets or Pop Tards. And no vegan junk food.

There’s an interesting juxtaposition of paradigm in observing vegans and very low carbohydrate diet advocates. I find them indistinguishable on principles; but in practice, they’re 180 out from one-another. Both are predominated by hobgoblins, many of them imaginary—relying on the bad, in order to toss out babies with bathwater. The unanointed but available, but taboo food gets tossed into the bin of guilt by association, without a trial—where meaningless distinctions get aired, so: guilt and conviction . Low carb and vegan, in many ways, are lynch mobs failing to make distinctions. It’s like being guilty by skin color.

It would be interesting to have a “Whole Fats” movement.

How about zero fear of any whole-food fat, plant or animal; but the rule is, you can only cook the meal with the fat in the food that’s in the meal and on the plate? Now how about that? Soups and braises typically incorporate that. No wonder that they’re so close to peasant food in spirit and practice, where there was no extra fat to dollop or tablespoon. The whole foods just went in the pot: meat, fat, and root veggies and all.

Here’s an example from my breakfast yesterday at noon. The taters are leftovers from “rack fries,” where you put them on the bare oven rack, no oil. They’re really great, and the leftovers you just slice up. The two slices of quality Black Forest bacon (a half-slice escaped whilst cooking the potatoes)  were quite lean and rendered maybe a tsp of fat, and that was used to reheat the potatoes in like 2 minutes on high, covered. The egg needed no fat, as there was still a film on the same pan and it’s one of those new non-stick. 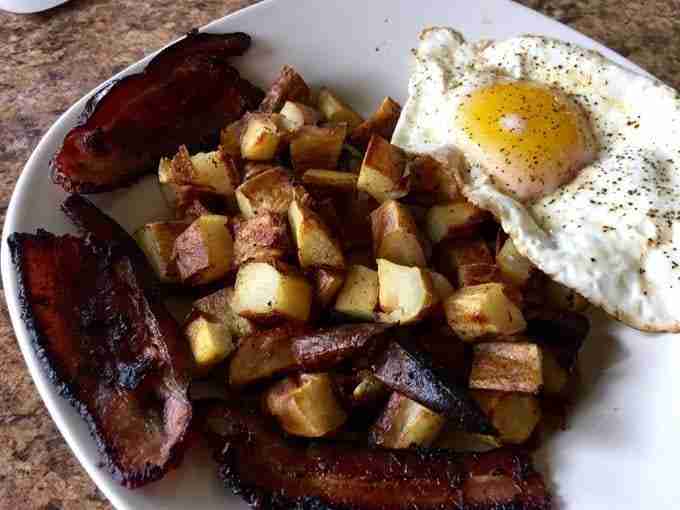 I did a Facebook post about it, and yes, Tim gave credit to the vegans from when it came, so if you must….

This is a decent hack to the potato hack for those of us who get bored. And I think it can be pure, too. Here’s the deal. You slice up a bunch of potatoes into what Americans call “steak fries.” Then, you do not preheat your oven.

That’s right. What you do is season them, or not, but in any case place them bare ass on the oven rack, then turn the oven onto 450 and take them out 30 minutes later. Let me be explicit: no tossing in oil and putting them on a cookie sheet. I must confess, this is brilliant and it must be only random chance that a shrivel-brain vegan actually came up with this between appointments to his or her therapist. 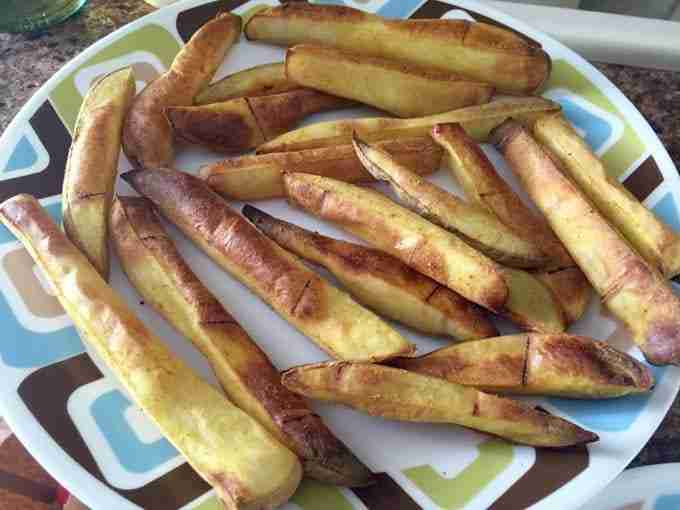 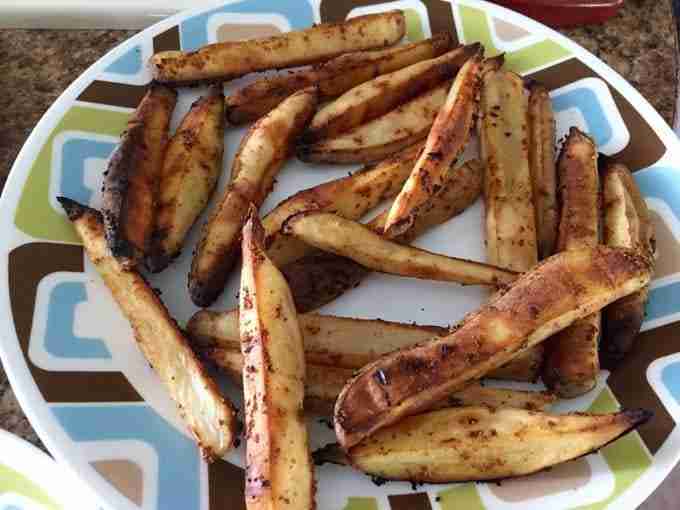 Russets tossed in salt and onion, garlic, and paprika powders

Of course, one can use sauces, but today, I did about 1 1/2 pounds, half and half with russets and golds, but only a toss of salt and pepper, and I ate them with no sauce. Well, I ate almost half. First food of the day, early afternoon, and I was stuffed after half the deal.

Incidentally, out of the oven, they were just over a pound, so they essentially lose 1/3 weight in the cooking process.

Alright, I want to hear of people doing rather complex meals, but doing it by the rule of no fear of fat, but that what’s in the cooking and ends up on the plate is the only fat you get to use.

Have some fun. Be creative.