This is a short follow-up to the post a few days ago about how food enrichment or fortification promotes obesity. Consider this a TL;DR version for those not yet motivated enough to read the 7,000-word post. Perhaps this will motivate some to delve deeper.

But first, a bit of clarification. I get the sense that some may be misinterpreting or misunderstanding our thesis here. It is, admittedly, a subtle distinction because it’s a chain, not direct cause –> effect.

What we said is that a diet rich in B vitamins (and perhaps other added, isolated nutrients—or even minerals like salt) enables you to eat a shitty refined junk food diet if you should happen to choose to eat them. Without those vitamins, you wouldn’t have much urge to consume those obesogenic foods or beverages.

Some “traditional” diets may too have been relatively high in some of the fortified and enriched nutrients we’ve been talking about (such as B vitamins), but they didn’t have the kinds of junk food we do now. They didn’t have a taste for it, apparently, or perhaps it would have emerged more naturally and widely on its own, rather than through livestock farming-like food engineering, intended to have animals put on weight rapidly.

We would not expect people to become obese unless they chose to eat shitty foods. But, their consumption of B vitamin-dense foods would better enable them to do so, if that was their choice. For example, a non-obese body builder, traditional diet eater, or health nut is a poor counterargument to our thesis, irrespective of their level of consumption of these nutrients, because junk foods aren’t a part of their normal diets.

Furthermore, this is not an idea that requires any formal “proof” or study, since it was already proven a century ago. That’s why the farming industry fortifies their feed. This isn’t new or controversial. In fact, it’s established knowledge and industry practice. It’s uniformly known and practiced in the farming industry and the results are predictable and reproducible 100% of the time. What we did is to simply point out how the food industry adopted similar practices for feeding junk food to Human Livestock.

We’re far from the only ones to make this connection. Unbeknownst to us at the time we published the monster post, Men’s Journal recently published More Nutrients, Less Nutrition: The Truth About Fortified Foods, by Mark Schatzker. 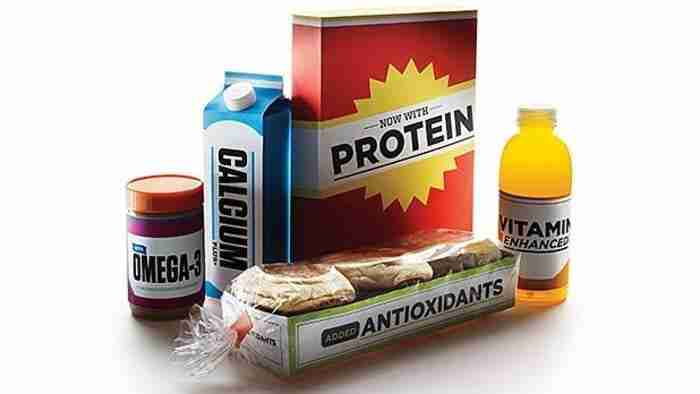 Nutritional fortification could be altering our innate, healthy relationship with food. Photo by Yasu + Junko

Cheerios with protein. Jif with omega-3s. Tropicana orange juice with “3X the vitamin C.” Walk through any supermarket and you’ll find hundreds of products packed with added vitamins and minerals, promising a path to better health through engineered food, and appealing to our faith that the more nutrients we get, the healthier we become.

There’s just one problem. No one knows if adding nutrients makes people healthier. In fact, many nutrition experts fear that these products may have the exact opposite effect. Nutrient-fortified foods not only dupe consumers into buying calorie-rich, sugar-dense processed junk, they may actually contribute to weight gain more than unfortified products. And, more ominously, some scientists fear that fortified foods could rewire our natural cravings, curbing our desire to eat nutritious whole foods in the first place.

While some fortified foods offer a meager portion of nutrients, others may supply far too much. More than half of American adults take some kind of dietary supplement. According to a 2012 study in the Journal of the Academy of Nutrition andDietetics, that can increase the likelihood of consuming certain nutrients in excess. Add in functional foods, and the amounts can become megadoses. A 2014 report in the journal Applied Physiology, Nutrition, and Metabolism analyzed 46 functional beverages — waters and sports and energy drinks — and many contained well above the daily requirement of a half-dozen vitamins, including B6, B12, niacin, and riboflavin. “The potential for massive dosing is very real,” says study co-author Valerie Tarasuk, a professor of nutritional science at the University of Toronto. “We have no evidence that intakes well in excess of requirements will confer benefit, but harm is an open question.”

One of those harms could be weight gain. In a paper published last year in the World Journal of Diabetes, Dr. Shisheng Zhou, a physiology researcher at Dalian University, showed that excess B vitamins can enhance fat synthesis, cause insulin resistance, and create an oxidative stress that cues the body to store fat in fat cells and then prevents the cells from releasing it to be used as energy. Countries that prohibit flour fortification with vitamins — including France, Norway, and Finland — have a lower rate of obesity than those that mandate it, Zhou notes. He goes further still, connecting spikes in U.S. obesity and diabetes rates with each new wave of fortification — first in the early 20th century, then again in the Seventies and Eighties, and most recently over the past decade. “It is necessary and urgent to review and modify the standards of vitamin fortification,” he says.

Keep chewing on this because you may find yourself into a solid Occam’s Razor paradigm, where every single other dietary paradigm you’ve ever considered from vegan to low-fat to ketogenic to paleo to Atkins is undercut and falls by the wayside.

So how do we know?

…In a study last year, 23 lambs at the University of Western Australia were intentionally fed a diet low in vitamin E, and then offered orange-flavored feed that had been fortified with vitamin E or a nonfortified feed. After 15 days, the results were clear: The lambs wanted the orange pellets. They preferred a flavor they didn’t ordinarily like, orange, because it was paired with a needed nutrient. “Animals have an extraordinary ability to seek out the nutrients that are essential for survival,” says Fred Provenza, a behavioral ecologist who has studied the eating habits of animals for more than 40 years.

Viewed another way, however, and the study’s outcome is disturbing: The micronutrient manipulated the lambs’ dietary preference. “The addition of a single vitamin can induce lambs to eat a food they would normally have no interest in eating,” Provenza says.

And adding those nutrients to carbs can fatten animals up. As counterintuitive as that may sound — vitamins contributing to weight gain — it’s old news in farming. More than a century ago, farmers knew that corn and barley (carbs, in other words) could make animals put on weight. But if that’s all chicken and pigs were fed, they would get sick. They had to be let outdoors to forage or be fed green feed and kitchen scraps. “Back then, livestock needed to eat vegetables to get their vitamins,” says Allen Williams, a former professor of animal science at Louisiana State University and livestock consultant.

That changed when we discovered that adding nutrients to feed allowed farm animals to thrive on a sensationally high carb diet. The feed was now nutritionally complete, and instead of making the animals sick, it made them gain weight faster than ever, Williams says. The animals were content to eat it. “If you supplement them with vitamins and minerals,” Williams explains, “they get lazy and have no desire to go out and graze. You can actually have an effect on their behavior.”

Could something similar be happening to humans? If we get our essential nutrients through white bread, sugary cereals, protein-packed bars, and vitamin-enhanced drinks, does it curtail our desire to eat whole foods? It’s a question worth asking, scientists say. “The fact that we no longer need to get micronutrients via a wide range of plants is one of many ways that the current food system in humans no longer fits our evolutionary history,” says Gary Beauchamp, the former director of the Monell Center, a hub for research on the science of food taste and smell.

Provenza suggests that we may already have the answer. “If people are on a diet of wholesome foods and they experience cravings,” he says, “it is the body guiding a person to select foods that provide nutrients needed at the cellular level.” A craving for eggs or steak, for example, leads to consuming a complex amalgam of protein, fat, vitamins, and minerals. Similarly, craving a salad brings the body a blend of vitamins, minerals, fiber, and phytonutrients. But if people are getting their essential nutrients from processed foods, the nutrients may be reinforcing the desire to eat junk foods over whole foods. “People are being conditioned to want to eat them,” Provenza says. “And when they do, they wind up overconsuming calories in an attempt to obtain necessary nutrients.”

The perverse result is that much of the food we eat resembles the feed that’s been engineered to fatten livestock: high in calories and loaded with essential nutrients.

“We never stop to think about it, but if you want an animal or a human to get fat quickly,” Provenza says, “you can’t do it without vitamins.”

So, while I can see certain advocates of dietary paradigms go, “see, carbs,” that would be a gross conflation, since, just as there are critical distinctions to make between sources of proteins (steak vs. hot dog) and sources of fats (butter vs. soy oil), there are equally critically important distinctions to make between sources of carbohydrate (a Coke vs. a potato). Plus, it’s Occam’s Razor all over again. What’s a simpler, more complete explanation? This, or that somehow billions of people throughout history seemed to have no problem with staple-food carbohydrate like rice, beans, corn, wheat, etc. but by some mysterious protective magic Americans and increasingly, other populations, have become susceptible to over the last several decades?

I just came from attending a three-day conference centered around the paleo diet and while the topics of discussion are quite varied with much value, this idea does not yet seem to be on the radar directly, though it is indirectly by eschewing junk food in most forms (except for “paleo” junk food). So it does address elements of a good healthy diet, should someone choose to adopt one. Good choice. However, I find it wanting for those of us with a deeper interest in addressing the human obesity crisis. That people aren’t “eating paleo” is a very poor explanation.

So, one can eschew grains, for instance, on the basis of evolutionary Paleolithic history, gluten, phytates, anti-nutrients, or by whatever else strikes one’s fancy, but then one is left with the niggling inconvenient truth that so many have fared quite well for thousands of years on them, and still do. And those who do tend to reside in countries that don’t fortify or enrich foods. I submit that the answer that fits all the variables best is the one that ought to be used until a better fit comes along.