Last August, in conjunction with The Duck Dodgers, we published about true whole grains: How Wheat Went From Superfood to Liability. I was surprised that reaction was reasonable, and even motivated a post from Tom Naughton with a substantial and constructive comment thread.

At the time, I began sourcing and eating true whole grain breads again. Most Americans have never had a bite of true whole grain bread in their mouth in their entire life, and certainly not as a daily staple. Most everything on your typical supermarket shelf labelled “whole grain” is in reality whole fraud. They take standard refined flour and add some bran to it. Total joke. This is like a freshly squeezed glass of orange juice from ripe oranges compared with something that’s been dehydrated, concentrated, frozen, later reconstituted with water, a tsp of pulp added in, and called “whole orange.”

This whole epiphany began back with our enormous post on processed cereal grain fortification, Iron, Food Enrichment and the Theory of Everything. Now that was a hugely popular post. About 2,000 social shares, dozens of links to it from elsewhere, many hundreds of comments.

Unfortunately, for many, and for their own reasons, ideologies, bias, etc., the chief role of that post came to serve as confirmation that for whatever reason one pics—whether carbohydrate content, “anti-nutrients,” romancing the primitive fairy tale, gluten intolerance, whatever—that grains, per se, are just bad. Fortification merely added yet another level of hellfire evil to them.

But that was not our intention. Our intention was to explore grains from a true whole, unmodified, non-processed, non-fortified perspective, and man did we dig up a deep history; where before modern processing, grains were uniformly lauded as the most healthy and wholesome of foods. We could find nary a single naysayer, and we looked.

Were they dumb? No, you’re dumb. Or rather, ignorant, and far too Dunning-Kruger on the topic to even begin to grasp the depth of your own ignorance. I’ll not rehash it. The links are all there for grain naysayers to continue to ignore, confident that their “knowledge” is wholly sound…when what’s really going on is that their overconfidence prevents them from even being aware of their own ignorance. Like I said: Dunning-Kruger.

This doesn’t apply to Loren Cordain, though. He’ll just yell ANTI-NUTRIENTS!!! louder and longer like the joker always has, since 2000.

I was rather pleased to note this piece in WSJ yesterday, albeit with a misleading title, in my view: Can You Carbo-Load Your Way to Good Health? Perhaps you can (I consume copious carbohydrate from whole sources now and have never felt better or more energetic), but the real point of the whole article is something quite different.

“A revolution is afoot in bakeries across the country. With highly processed flour giving way to freshly milled whole grains rich in nutrients as well as flavor, it might just be OK to love bread again.”

Nice to see the word “re-evolution” used in conjunction with grains, as it’s actually quite descriptive of what’s really going on. Essentially, there are bakeries cropping up all over the place now where, they either grind their own whole grains from the whole berry (germ, bran, and endosperm) in-house daily, or they source fresh whole grain flour from known and trusted sources.

To understand flour, you must know the wheat kernel, which comprises a fibrous outer layer, the bran; a starchy middle layer, the endosperm; and the vitamin-rich core, or germ. For most of human history all wheat was milled whole. White flour, a modern invention, is produced by grinding only the endosperm for shelf-stable starch that is later enriched with a handful of vitamins and minerals.

Freshly milled flour is also worlds apart from the so-called “whole wheat” flours and baked goods on supermarket shelves. Typically, those are made by mixing white flour with a small amount of wheat bran but with the wheat germ omitted altogether because its oils limit shelf life. (For those playing along at home: Community Grains, Grist & Toll and Carolina Ground are three excellent online sources for whole-milled flour. The flour starts losing its flavor immediately after milling, and should be used within a week for best results. Store it in the freezer to preserve flavor and prevent it from turning rancid.)

The cool thing is that you can do it at home and there are any number of selections on Amazon for grain mills. Just be sure the grinding stone isn’t cast iron.

And you can easily get various whole grain berries at local outlets including Whole Foods, or of course, Amazon for everything. Currently, I’ve been using Bob’s Whole Wheat Organic Pastry Flour. It’s stone ground and from the package:

“Premium organic baking flour stone ground from America’s highest quality of soft white wheat. It contains all the precious oil from the wheat germ, fiber from the wheat bran, and protein from the inner endosperm—nothing added or removed.”

This is the sort of thing you want (or get their dark northern hard red wheat for bread baking). So far, I’ve only done things like popovers, Yorkshire pudding, pancakes and waffles with the pastry flour, and I’m considering getting the mill and having some fun with various freshly ground grain blends, natural sourdough fermentation, and so on. So far, I have been sourcing bread from a place in Santa Cruz that grinds daily every morning.

Have I mentioned the health problems from eating that bread regularly since last August, so nine months now? How about the gluten intolerance, the GERD, brain fog, and intestines twisted in knots? I haven’t? Well that’s because there are none, and I’d sure not be so dumb as to persist for nine months and dozens of loaves if I had any problems at all.

The essential problem with this whole deal reflects my various frustrations with various levels of LC, Paleo, and other dogmas. For example.

Of course, lots of this now looks like vegan propaganda to me (here’s JP Sears, same guy in the video above:  If Meat Eaters Acted Like Vegans). It’s all basically failures to make distinctions, gross conflation, and a bunch of stuff it’s really pointless to go into because I’d rather focus on what I’m doing and anyone is free to try it out.

Feel free to discuss it with me at paleo f(x) next week. Yep, I’ll be there. First event since AHS12. In spite of my differences with the movement, I’m looking forward to attending and seeing some folks I haven’t seen for years.

I’ll save the whole top-down view for another post, but just to give you a couple of things to try with whole grains that are damn easy and tasty.

Yesterday I received an email from one of the well-meaning paleo folk out there with the latest and greatest pancake recipe, painstakingly developed so that after the 1,000th iteration in like 8 years of trying, it’s finally fabulous. All you have to do is source about a dozen ingredients, half of them so exotic you’d likely never use them for anything else and will eventually toss them out from your cupboard (been there, done that, so many times). What’s this recipe’s claim to fame? No grains, no dairy. It’s great for what it lacks.

On the other hand, how about the basics: eggs, flour, milk, salt…the caveat being that the flour is true whole grain. Here’s one I tossed together the other day just on a whim. Makes 1 serving which is a full 10″ pan, cut in quarters when you “flap” them.

I initially began with the egg and 1 heaping TBS of flour. Mixed, added the OJ and milk, then it took 2-3 more TBS flour to get to a thin batter consistency. 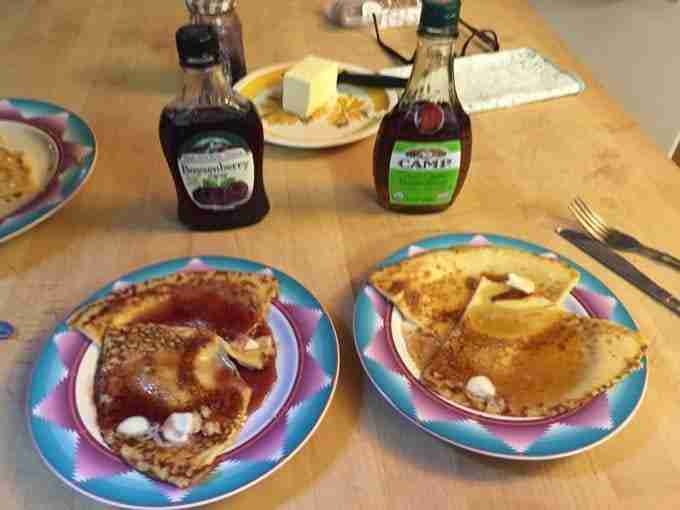 Tiny bit of butter, about 2 tsp each of the two quality syrups. They’re great and you know what? You can taste the orange, so even just a slight bit of butter and they are excellent. I formalized the recipe a bit for 2 servings and it came out perfect.

I got a waffle iron, the kind that does Belgian waffles — Cuisinart WAF-300 Belgian Waffle Maker with Pancake Plates, and I got it to make “potato waffles.” 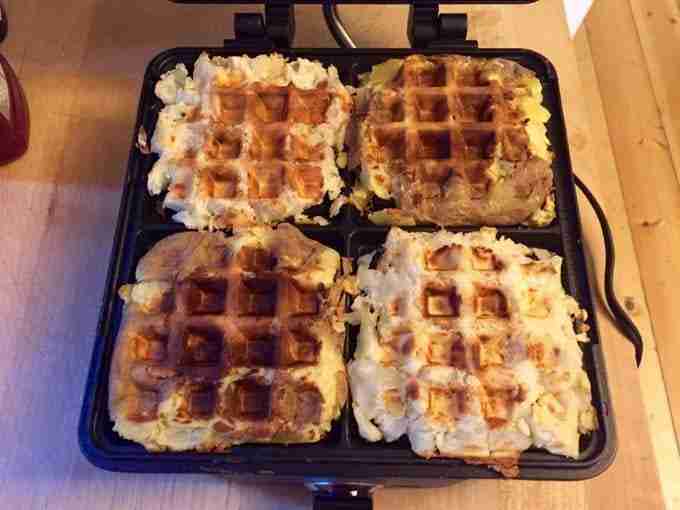 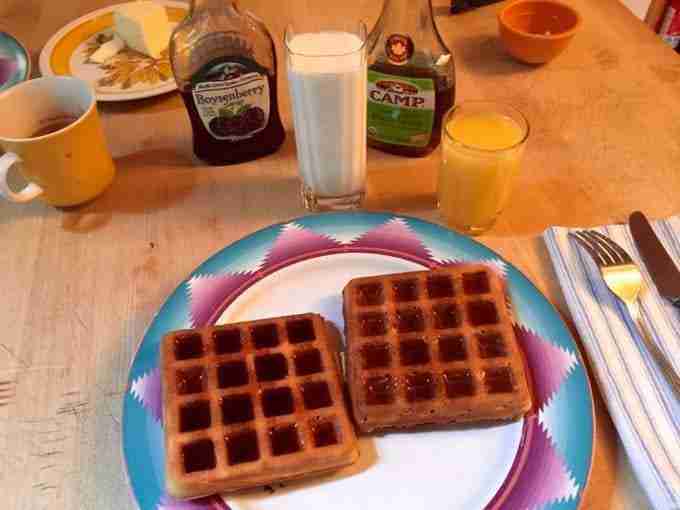 And yes, it all goes down with my quasi-“Peatarian” approach. I do about half of his daily recommendation of OJ and milk, so about a pint of OJ and quart of milk daily. Plus I avoid PUFA, but only from processed foods, dressings, sauces, etc. I do not worry about PUFA from whole foods like chicken.

So there, go out and waffle about whole grains.