What If It’s All Been A Big Fat Truth?

Hopefully, Gary Taubes won’t mind my play on his title. In fact, this post isn’t really to address low carb—its pluses or minuses—at all, but rather to further advance the idea that just as Mike Eades recently blogged, fat may indeed play a role in the American obesity epidemic.

Would it surprise you to know that since the early 1960s, this particular fat has steadily increased in both the American diet and the American fat tissue? Stephan Guyenet, PhD and his co-investigator, Susan Carlson, PhD, have done the heavy lifting in mapping it all out for us in a paper just published:

Increase in adipose tissue linoleic acid of US adults in the last half century.

Linoleic acid (LA) is a bioactive fatty acid with diverse effects on human physiology and pathophysiology. LA is a major dietary fatty acid, and also one of the most abundant fatty acids in adipose tissue, where its concentration reflects dietary intake. Over the last half century in the United States, dietary LA intake has greatly increased as dietary fat sources have shifted toward polyunsaturated seed oils such as soybean oil. We have conducted a systematic literature review of studies reporting the concentration of LA in subcutaneous adipose tissue of US cohorts. Our results indicate that adipose tissue LA has increased by 136% over the last half century and that this increase is highly correlated with an increase in dietary LA intake over the same period of time.

I don’t have access to the full text but since it’s a research review paper, looks like Stephan was pretty able to cover all the essentials in his blog post.

We identified 37 studies that met our criteria, the first published in 1960 and the last in 2010. The key finding is that there was a substantial and consistent upward trend in the LA content of body fat over this period (R2 = 0.83; p = less than 0.001). You can see it, with trend line added, below: 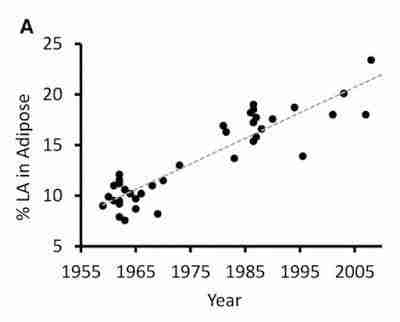 To determine how these changes relate to our diet, we obtained data on LA intake over time in the US, generously provided by National Institutes of Health researcher Joe Hibbeln (3). As expected, there is a strong correlation between the LA we eat and the LA in our fat tissue (R2 = 0.81; p = less than 0.001). This has been shown in controlled fat modification trials and cross-sectional studies, but to our knowledge it has never been confirmed using population-level data of people eating typical diets that change over decades.

This change in the composition of our fat tissue is primarily due to our greatly increased intake of seed oils, especially soybean oil, but also corn, sunflower, safflower, cottonseed, and peanut oil (4). Our total added fat intake has increased over the last half-century, and the types of added fats we use (including in processed food and restaurants) have shifted from animal fats like butter and lard to seed oils. I’ve illustrated that in the graph below*: 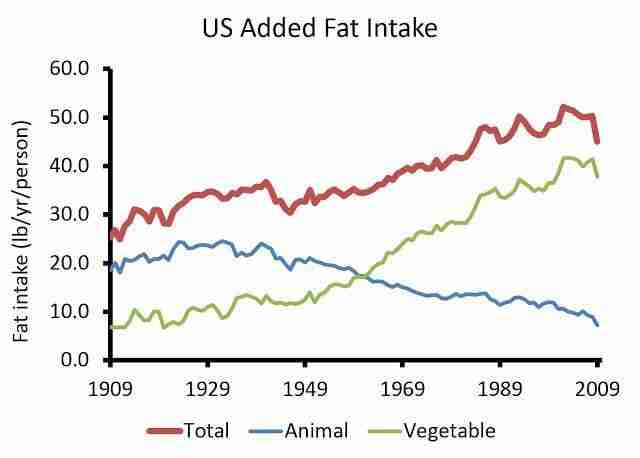 And a further association, potentially explaining a part of the European or French or Mediterranean “Paradox.”

This adds up to a much higher total LA intake than the historical norm for the US and most of Western Europe. In fact, the current LA content of fat tissue in Europe is still quite a bit lower than it is in the US—it’s about where the US was in 1970 (5, 6, 7). This may reflect a less processed/industrialized diet.

Nice sleuthing and dot-connecting, and now for the rest of the story. It makes me wonder about a possible “Big Fat Truth” in my own life. For, you see, I was a sunflower seed junky; and I’m talking about being a junkie’s junkie. For years.

My dad loved sunflower seeds. Now, I’m not sure when he picked up the taste for them, but as a kid, I remember when he’d often have one of those little four-ounce packs in his shirt pocket. He’d take a small handful, pop the whole thing in his mouth, lodged between cheek & gum, then hull them one at a time with tooth & tongue, expelling the shell. I thought that was neat and so I quickly learned how to do that expertly myself.

But this was pre-junkie stage. It’s something we’d do from time-to-time, like a hunting or fishing trip, or a drive in the car. But as with many things back in the 60s and even 70s, there always seemed to be a sense of proportion. It was only much later than the bags were big and bigger, 40% more for the same price, and you’d just munch longer and longer.

Then I went to college, then lived abroad for eight years and never ate them as far as I can recall. Not a thing in Japan or France. I never had any particular problem with weight or fat accumulation, even though I ate whatever without thinking about it.

I’d guess it was around 1994 when I resumed the habit, but in a big way. That was the year I got a nice apartment as I was building my first successful entrepreneurial endeavor, and I discovered Costco. Besides the 10-packs of tuna fish, family-packs of beef tenderloin to be individually frozen, they also had these boxes of David’s sunflower seeds, and in each box was at least about 3-dozen individual medium-size bags, 8 or 10 ounces, I guess.

And basically, over the next 12 years or so, I pretty much consumed a bag per night, every night, in front of the TV. I still have my cherished set-of-two woven-wood salad bowls: one to dump the baggie contents into, and the other to discard the shells. It was a ritual.

Update: Forgot to estimate the quantity. If that 8-10 oz bag was equivalent to about 50g of the actual kernel, then looks like I was getting about 10g per day of n-6 from that single source alone.

And interestingly, it very closely correlates over the next dozen years of my weight gain from the 180s to 240s when in 2007, I began the LCish / Paleoish thing and those seeds were one of the things to go. And along with that, because of the Paleoish aspect, my intake of LA from other sources like junk food, fast food, and other sources of seed oils dropped too (no more bottled or homemade blue cheese dressing with soy oil mayo…EVOO and either vinegar, lime, or lemon). And guess what else? It really didn’t take me very long to dump the silly use of nut flours (like almond) for various cooking applications. And my consumption of nuts in general was pretty mild.

Wouldn’t it be just hilarious if LA from an over-consumed whole food like sunflower seeds was the primary driver for me? So I guess the way to consume sunflower seeds is to grow your own, and pick them from the flower one-by-one. But, oh wait, then they wouldn’t be roasted and salted. Nevermind.