The Artful Practice vs. The Advocacy of Violence: A Juxtaposition Between Muhammad Ali and George Takei

In 1991 and ’92, as a US Navy officer on exchange with the French Navy, I took up a truly intellectual endeavor for the first time in my life. I also turned 30 at the time. I read and read—so many classics of literature and Enlightenment. Fundamentally, I came away with the notion that the initiation of force by any individual, group, or State against any individual or group is fundamentally immoral and the core source of all problems in society.

I committed my mind and practice to that principle, and the first step was to resign my navy officer commission, which I did in 1992. Since then, I have been pretty tireless in advocating for that ideal. I was in Prodigy, AOL, and Compuserve forums early; later, USENET…and after a few years of hiatus where I met, married, bought a house, started a business, and got a dog, I began blogging in 2003; or, 4,300 posts ago.

The astute know that even when I’m talking about diet, I’m really talking about freedom from force and threat or force or coercion.

Muhammad Ali. Is it not remarkable that such a guy so captivated attention in the latter 60s and the whole 70s? A guy who adopted the Islamic faith, took a Muslim name? No worries for 1960s Americans. He was a celebrated hero. I like what Karen De Coster (now with an appendage called Campbell), wrote about Ali on Fecesbook.

My Facebook thread is filled with dissing of Muhammad Ali by, what I can mostly discern, those who are conservatives, Republicans, and assorted fundamentalists. Each slam is of the same boorish content; draft dodger, draft dodger, anti-American, yada yada.

All I see is these folks writing about hating Ali while they instead wish to worship and honor those who went to war under a slave-draft system to kill people they knew nothing about because their government held a gun to their head, gave them a draft number, and opened the gate for them and the rest of the cannon fodder. The “draft dodger” condemnations are being carelessly flung out and about by the usual idiots. On a correct note, here’s Tom Mullen:

“Ali never dodged the draft; he opposed it, accepting the legal consequences without any attempt to evade them. He didn’t flee to Canada or enroll in college to obtain a deferment. From the moment he learned of his induction, Ali stood firmly in the proud tradition of civil disobedience, saying “just take me to jail.””

So Muhammad Ali is properly described as being willing to _die for_ peace and freedom. He faced down the government, held on to principle, spoke his mind, and never sold out a damn thing in spite of his incarceration. He didn’t run – he stayed and fought the establishment, even as the government tried to destroy him.

Then, folks are bringing up Ali’s racial connotations about white people being his enemy, with him saying (to paraphrase), “I’m not going to go over there and help somebody get what the negroes don’t have,” and telling those young, white kids on college campuses, “You are my opposer when I want freedom, you are my opposer when I want justice, you won’t even stand up for me or my religion, but you want me to go somewhere and fight somebody who has done nothing to me.”

Ali, in his times, was exactly right about all of that, so what’s the problem? This is something that today’s fake-i-fied Social Justice Warriors cannot even comprehend. Ali was indeed a great American. 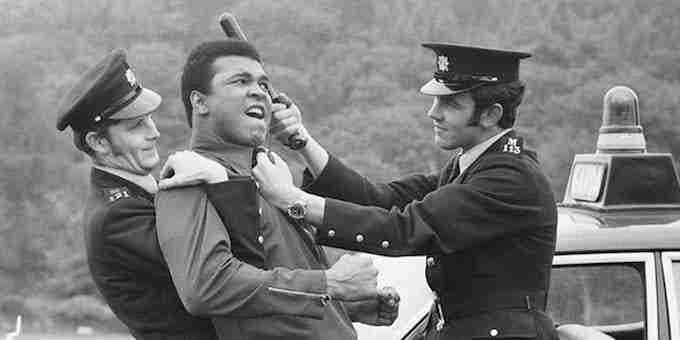 It was indeed rather interesting in the aftermath of his death to just go to Facebook, search the man’s name, and scroll.

Here’s a couple in particular I liked.

And this one demonstrates what a thinker Ali was and didn’t worry about going against the prevailing regurgitation for birdbrains.

He’s making a distinction between racism, and the love of one’s culture and ethnic identity. I wrote about exactly this, 11 years ago, in 2005, calling it “culturism.”

So, given that Ali was a boxer who dealt out more physical punishment than most men ever have or will, yet was willing to go to prison over a commitment to non-violence suggests that he was a principled thinker of a man and made the correct critical distinction: ‘we boxers sign up for this.’

…Now let’s turn attention to George Takei, a man—and family and ethnic brothers and sisters—literally interned by main State force during WWII by the political apparatus—the FDR democrats—he supports above all else (his Facebook presence increasingly drips with his hard leftist bias).

Last week or so there was a Trump Rally in San Jose, CA, and here’s some of what happened, as it has happened elsewhere and has been happening. About a minute into the video, you begin to see the cold-cocking and kicking-when-down by the “peaceful protesters.”

As an aside, the police were rather standoffish in terms of “protecting and serving:” San José police fretted that protecting Trump supporters would further ‘insight’ the mob. Or, perhaps it’s just Occam’s Razor. Could the simpler explanation be that Eddie Garcia, the Mexican-Latino Police Chief of San Jose is a public racist and as an affiliate of La Raza (“The Race”), a Brown Supremacist? It’s worse than a White Supremacist because he has a position, political power, and influence. Very few, if any, White Supremacists do, anymore. “Affirmative Action,” I guess.

…But here’s what George Takei posted on Facebook concerning violence directed at Trump supporters in San Jose and his other political rallies, quoting an article that asserts in its tagline that “experts and political leaders alike begin to ask whether Trump should be held responsible,” (you know, unlike holding the Trump protesters responsible for individual or group acts of violence). To this, never a man to pass up an opportunity to stridently condemn anything, without exception, counter to the political left or psycho queer fringe, George was in fine form in his unequivocal condemnation of the widespread violence and the lapse by the “protectors” in handling it.

“A fascinating and troubling look into the politics of division.”

Wow. Way to call out violence (“politics of division”), George. Personally, I find your lack of moral indignation both fascinating and troubling.

Anyway, I later posted this, tongue-in-cheek like, as a sort of troll of Takei.

“@georgetakei is responsible for all the violence in San Jose. I think people should file a lawsuit. He has to be held accountable for his speech.” 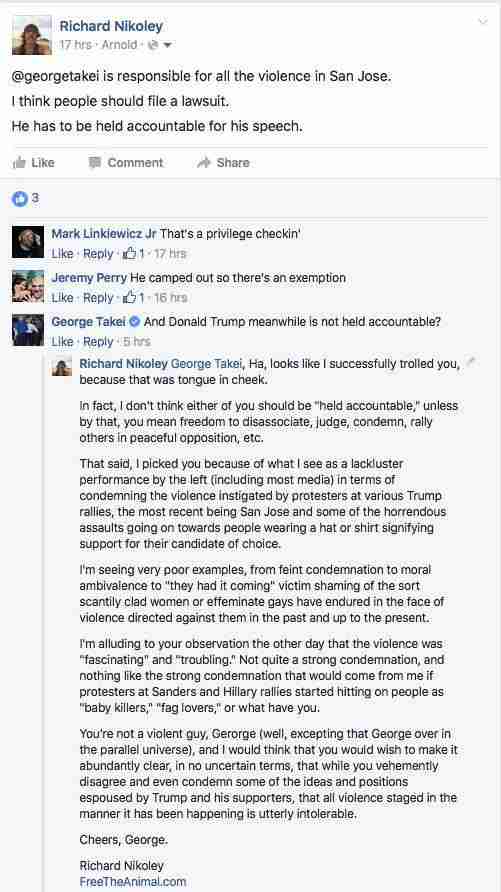 See, in the intelligent though indoctrinated, regurgitating mind of someone like Takei, he sees no overriding moral principle in play here. He would immediately—and with fake moral indignation—condemn violence at a Hillary or Sanders rally instigated by anti-abortion or anti-gay activists, yet puts on a faint “troubling” when pro-socialism stripes of every free-stuff color instigate violence against those interested in doing something about protecting their earned income, property, and American way of life that’s tied up in a certain character of culture and sub-ethnicity that’s actually quite diverse, even amongst the right and conservatives.

It’s just not the right kind of diversity.

I can only conclude that Muhammad Ali was a moral giant, whereas, George Takei is a moral Pygmy.