#Brexit: My Take and The Best and Funniest Stuff I Saw

Let’s set the tone with a good LOL. 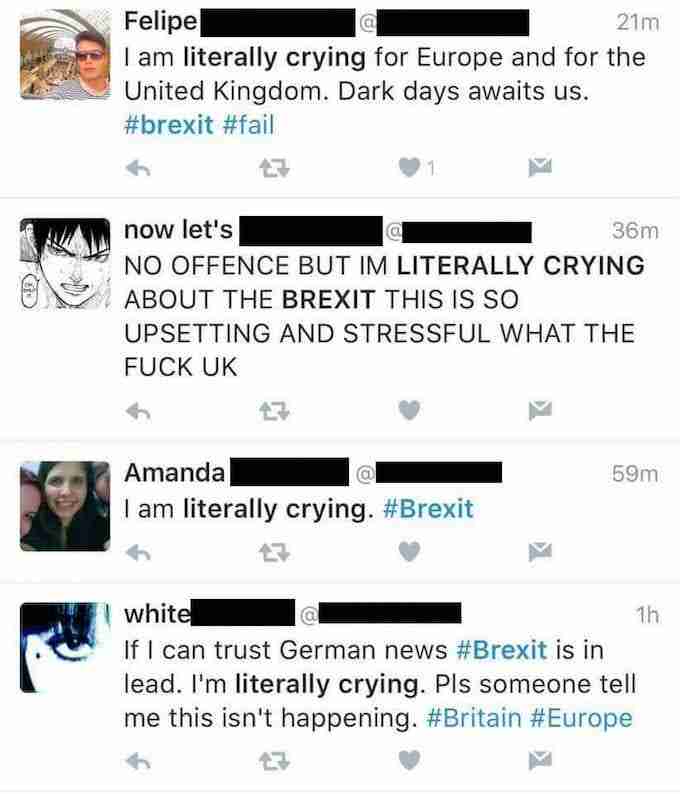 It turns out that the voting demographics are pretty interesting. EU referendum: The result in maps and charts. Lots of ’em. This one is particularly telling. 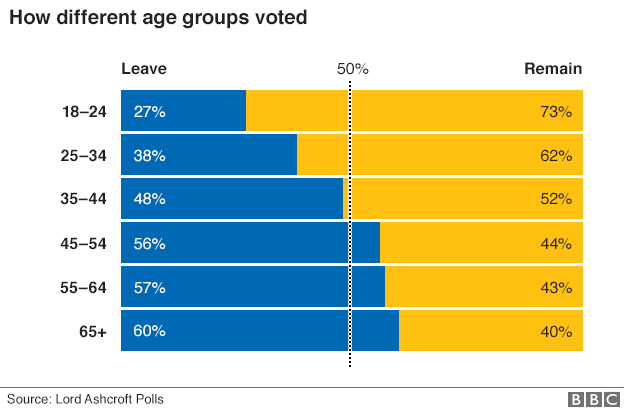 Or, seems those who were bright-eyed young folk 41 years ago and voted to remain in the European Economic Community (EEC), the predecessor to the EU, have become disillusioned in the interim. Perhaps it was the recent EU move to ban electric hair dryers, toasters, and teapots…or perhaps the EU “Bendy Banana Law“…who knows?

At any rate, just like the literally crybabies up top, lotta younguns gots knickers in bunches.

Oxford, UK — Gloom and disillusionment rippled across the Oxford University campus today, as students woke up to not only their final exams, but to news that the British electorate voted to separate from the EU, that their prime minister had resigned over the so-called “Brexit,” and that their economic prospects were suddenly thrown into turmoil.

Standing outside a university café, after a night of celebration following her final exam, 19-year-old medical student Evie Rothwell said she was feeling a sense of “betrayal” this morning.

“A really important decision was made for us by the older generation,” she explained, noting that exit polls showed that three-quarters of voters aged 18 to 24 wanted to remain in the EU. By contrast, more than 60 percent of seniors aged 65+ voted to leave. […]

The students see the vast job and travel prospects the EU offered them suddenly drying up, and they described how they felt their worlds would get a lot smaller. Rothwell worried about her future medical licensure, and whether she’d be able to move around as freely as she had hoped.

You do see it, don’t you? Other people’s money (OPM) flowing into all hands in a sophisticated Bread and Circuses shell game, where each person is convinced they are defying reality by living at someone else’s expense, and could not imagine getting by otherwise. Euphemisms abound, like betrayal, prospects, and opportunity. 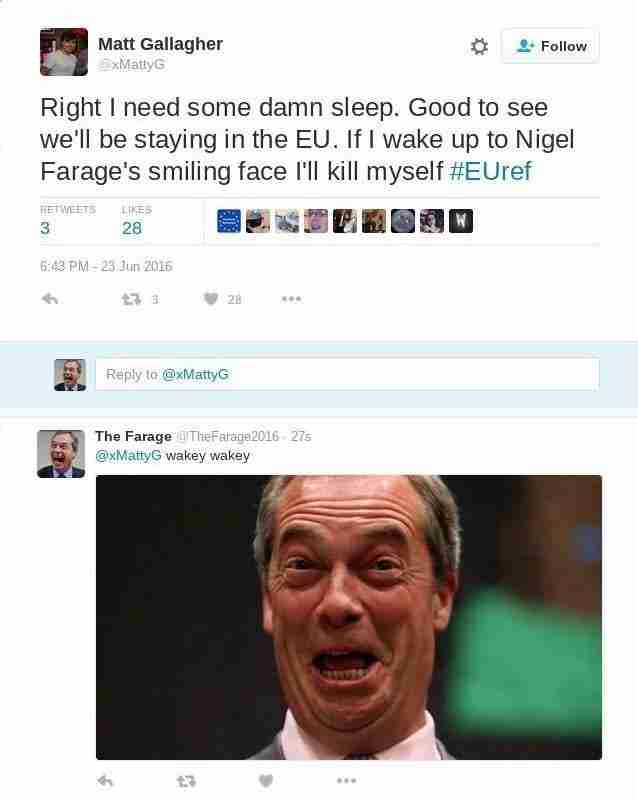 The handwringing is perhaps what puts me in a state of LITERALLY CRYING [with laughter] the most.

…And there’s nobody better at being “concerned” than ‘ole George Takei.

I cannot begin to fathom what the greater and likely dire consequences of this shall be. ‪#‎BrexistentialThreat‬

Of course you can’t, George. You’re a regurgitator in service of The Narrative, and this wasn’t in the script. With any luck… 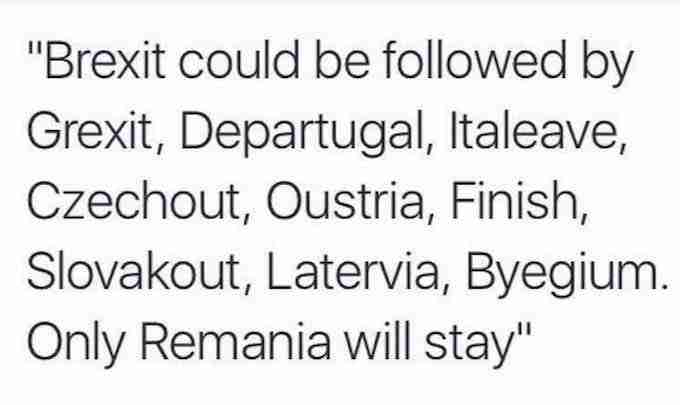 …I’m just wondering what the better hashtag would be for the movement for the U.S. to leave the UN.

I’m troubled and can’t begin to fathom which is better. Any ideas?

It’s important to understand what this is, and what it’s not. The gloom and doom over economics, markets, trade, uncertainty, lost “opportunities” and “prospects”  will persist.

Brexit’s consequences, according to an expert: “clusterfuck”

The UK’s vote to leave the European Union has totally stunned the world. Almost no experts saw this coming, and professional foreign policy watchers appear to be in a state of panic. Not because they blew the call, but because the Brexit seemed too scary to actually happen.

To understand why so many experts are now so anxious, I spoke to Dan Drezner, a professor at Tufts University’s Fletcher School of Law and Diplomacy and an expert on the global economic and political system. He explained that the UK’s “Leave” decision totally upended the way the world is supposed to work — and potentially created avenues for real chaos.

“This, globally, is the equivalent of Trump getting the GOP nomination,” Drezner told me. “Everyone thought the way the world works was a certain direction, or that there were certain rules of thumb. Those rules of thumb are now being thrown out the window.”

And this, he argues, is very, very scary.

That goes into my The Onion Get’s Scooped Again file.

But some have a fundamental understanding of what this is really all about, ideologically and symbolically.

This was the day the British people defied their jailers

There were two referendums on Thursday. The first was on membership of the EU. The second was on the British establishment. Leave won both, and the world will never be the same again.

It’s impossible to overstate how remarkable this victory is. Twenty years ago, Euroscepticism was a backbench Tory rebellion and a political cult. It was a dispute located firmly on the Right with little appeal to Labour voters. It took Ukip to drag it into the centre of political life – given momentum by the issue of immigration – and slowly it has emerged as a lightning rod for anti-establishment activism. […]

But this time the establishment consensus coincided with a historic loss of faith in the experts. These were the people who failed to predict the Credit Crunch, who missed the greatest economic disaster to hit us since the Great Depression. And we were supposed to believe them? Slowly the consensus came to resemble not just a conspiracy but, worse, a confederacy of dunces. […]

…People wanted to have their say and they did. Up and down the country they defied the experts and went with their conscience.

Brexit: Why The Globalists Lost

There’s panic in the skyscrapers. A popular revolution against globalism is underway, and Britain has struck the first blow.

To the dismay of political, financial, and media elites, the country has chosen to put identity and sovereignty above a plus-one-or-minus-one change in GDP, and vote to leave the hated European Union. As with the USSR, the attempt to superimpose a manufactured civic identity over proud nation-states with rich and complex histories has run against the grain of human nature. The elites, so wrapped up in statecraft and economics, never paused to consider basic human psychology.

It’s not just Britain, you see. The revolution against globalism is, well, global. Britain may be leading the charge, but insurgents and rebels from D.C to Berlin are also hard at work tormenting their elitist overlords. Fired up by Britain’s example, eurosceptics across the continent are now demanding their own referendums. It’s a Berlin Wall moment.

The unelectable and unaccountable bureaucrats in Brussels must be pissing themselves right now. They are losing one of the biggest crutches for a fragile alliance of countries that can’t pay their bills. (Fortunately, they still have the power to unilaterally grant themselves a monthly budget of 2,000 euros for trouser cleaning.)

There’s a conflation between this “Euro Identity” represented by the EU political entity and what it means to be a European. For example, I’m a “Nevadan,” born the son of a German immigrant. But I’ve never confused what it means to be an American with being a subject of the United [Federation of] States.

I’ve never called myself a “United Statesan.” I call myself an American and to be perfectly clear, I consider The Declaration of Independence to be the founding document of America. The U.S. with its Constitution is merely a political overlay that has little to do with my sense of culture and identity.

So What Now, Britain?

Britain’s historic decision to leave the European Union represents a blow for political centralization. However, it’s also a sobering reminder that the work of advancing peace and economic freedom is never done. Britain may be extricating itself from EU political control, but if its goal is genuine progress and prosperity, it will need to do much more than simply sever its ties with Brussels.

What Britain needs most is a return to the ideals of peace and free trade exemplified in the work of Richard Cobden and other 19th-century liberals. Sadly, this philosophy was entirely absent from the rhetoric of the Leave campaign, which was more often motivated by the same protectionist fallacies the classical liberals so effectively demolished. And although it’s uncertain what economic policies Britain will adopt in the next few years, it seems unlikely that protectionist rhetoric will disappear, or that many Brexit supporters will spontaneously abandon their faulty economic reasoning.

On the contrary, it is likely that Brexit, despite its positive effects, will also produce a rise in illiberal sentiment in Britain and in Europe. For example, it’s practically a given that every economic problem occurring in the near future will be attributed to Brexit. Yet this only means it’s more important than ever to stress that leaving the EU is not equivalent to becoming liberal; instead, it’s only one part of that process. Consequently, liberal ideas cannot be held accountable if a more decentralized Britain uses its newfound independence to adopt trade restrictions and other nationalist policies.

Without winning the battle of ideas, the gains from leaving the EU will amount to very little. In this battle, Brexit is not so much a victory as an opportunity. And as Joseph Salerno argues, we must seize every available opportunity to reduce the state and expand the free society. The only way forward for Britain is to adopt a program of economic liberalism. Brexit offers a chance to once again spread those long-neglected ideals of peace and free trade from which all human progress derives.

Yep, follow-through is necessary. It’s important to recognize what this means ideologically just as much as what it means in practical financial, trade, immigration, etc. terms.

This is still collectivism—just as the American Revolution and its follow-on Constitution were collectivism. America began its ideological decline not long after the ink was dry on the Declaration of Independence.

I have been championing minorities for more than two decades, undercutting most all who believe they do the same.

I champion the irreducible minority, never the contrived collective one. My minority is irreducible, inviolable qua entity, and the trump card always.

I champion The Individual and uphold their natural right and freedom to associate with anyone they like—or disassociate from anyone they dislike—in the human animal jungle of value diversity.

I’m for the smallest minority you can get. So there’s still a lot of “leaving” that needs to take place. By my count at this writing, about 7.4 billion #iExit Referendums ought to do it.