This is what I have been telling you (here, here, and here). There are three principle issues in play that require distinction.

In The Washington Post last year, Eugene Volokh demonstrates that in the case of #2, above, there isn’t even a correlation, much less any causal relationship.

There’s been much talk recently — including from President Obama — about there being a substantial correlation between state-level gun death rates and state gun laws. Now correlation obviously doesn’t equal causation; there may be lots of other factors that are the true causes of both of the things that are being measured. But if we do look for now at correlation, it seems to me that the key question should focus on state total homicide rates, or perhaps (for reasons I describe below) total intentional homicide plus accidental gun death rates. And it turns out that there is essentially zero correlation between these numbers and state gun laws.

Mr. Volokh continues, describing his methods of data analysis and their sources.

So, given this, let’s look at how jurisdiction-level homicide rates (i.e., homicides per 100,000 people) correlate with jurisdiction-level gun laws, counting the 50 states and D.C. (I use 2012 Justice Department homicide data, from the Proquest Statistical Abstract of the United States, 2015. I use the 2013 gun law scores and grades from the Brady Campaign, with low scores meaning a low level of gun restrictions and high scores being a high level. And I use an estimate of my own for D.C. based on the Brady Campaign’s criteria, since the Brady list didn’t include D.C.; I think my estimate is if anything an underestimate of D.C.’s tight gun laws, at least as of 2012-13.) I have also run the analysis using the data from the National Journal article that has recently been in the news, and the result is virtually identical.

And here’s the bottom line. 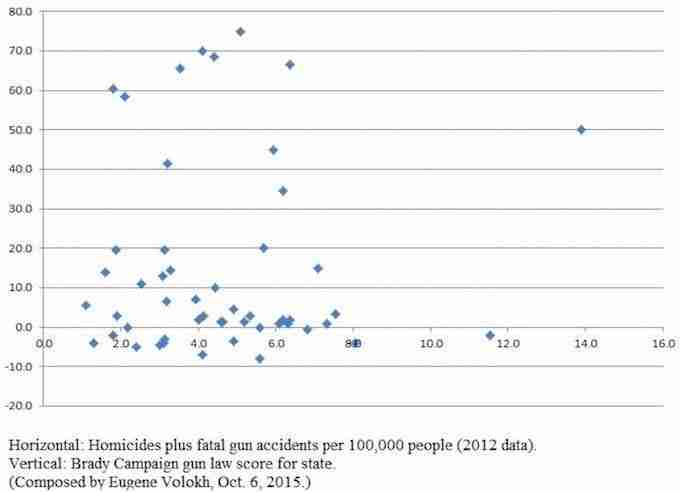 Obvious Conclusion: zero correlation, don’t even flap your idiot jaws about causation. There is none.