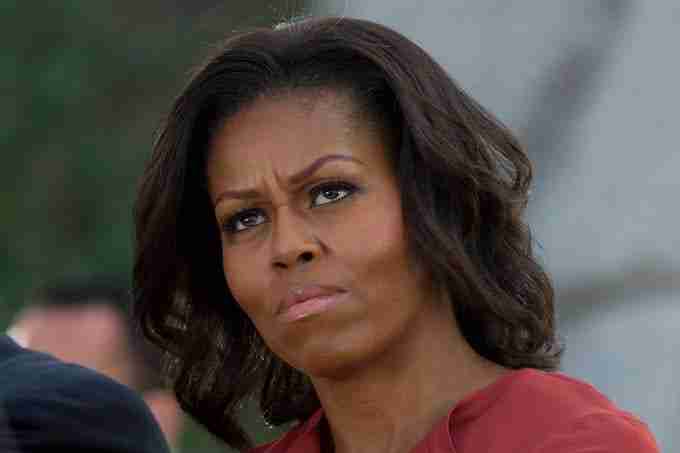 Thanksgiving holiday, 2007—and just short of a year away from the presidential election that ushered the Obama’s into the White House—I happened to overhear an episode of Oprah people were watching in the next room. Michelle Obama was one of the guests and here’s what I wrote on this blog about it:

Yesterday, I endured — for a short time — being lied to by the wives of the presidential candidates on some Oprah-Doprah teevee program. It was such utterly contemptible, pandering and rotten bullshit that it always makes me wonder what world I live in, when I know there are millions on millions just lapping it up like it’s the first time in the world they’ve heard it. Obama’s wife was clearly the stupidest (I’m saying nothing). She prattled on endlessly, naming things that require the time and values of people to create, assemble, and manage; yet the whole point in brining up these things is to admonish “getting the money out of them.” In other words: do them devoid of the principle means by which things get done. I guess they’ll happen somehow. Fucking moron.

Here we are more than 8 years later, and at her DNC speech the other night, she bitched: “I wake up every morning in a house that was built by slaves.”

Yea? Well cry me a fucking river. ALWAYS the victim card with Democrats. Always, no matter how privileged, it’s inch mile with their endless class-warfare, race-warfare, gender-warfare, accident-of-birth warfare, and literally anything and everything that can be used to divide, to pit one against the other, to always concoct the appearance that you’re worse off because some folks in other classes, groups, cliques, and circumstances are better off. In other words, the lie is: they’re so well off because you’re their slave. You’re paying for it.

So let’s take a look at just how tough Michelle has it, at the hands of millions of her slaves. Free Michelle Obama’s Slaves, Frontpage Mag.

…Michelle’s house continues to be built and maintained by slaves. Her lavish lifestyle of endless vacations, parties and public appearances is funded by millions and millions of slaves.

Michelle Obama lives a life that is more lavish and luxurious than that of the average plantation owner. She has 26 staffers that are part of a White House staff of thousands. That’s more than many crowned heads of state. Compare that to 12 servants for Thomas Jefferson.

Michelle has more directors than some corporations. And working for her is a Marie Antoinette experience. “The First Lady having the wrong pencil skirt on Monday is just as big of a f___ up as someone speaking on the record when they didn’t mean to or a policy initiative that completely failed,” one former staffer said.

Of course that’s their business. Michelle’s staffers chose their jobs and they get paid. It’s the taxpayers who have to pay for it all who are forced to be her unwilling slaves.

Michelle’s house, her luxurious lifestyle, is built by taxpaying slaves who are forced to turn over their money to fund her pleasures. She spent more money on one night in Morocco than the average American family will see in five years.

In Dublin, Michelle Obama and her entourage took a sightseeing trip that cost over $250,000. Michelle’s people bought up 30 rooms at the five-star Shelbourne Hotel while she stayed in the Princess Grace Suite which has more living space than most American homes. The Shelbourne Hotel wasn’t built by slaves. But it was funded by them. So are all of her jaunts, excursions and parties.

When she shops around Paris and then flies over to London in a 757 to see the sights in London, her slaves pick up the tab. When she and her husband decide to fly out for a “date” to New York while the city is shut down, it’s her slaves in the big city watching the motorcade pass who have to pay for it. Their Africa trip cost millions. American slaves paid for it with their blood, sweat and toil.

Maintaining the Obama lifestyle cost $1.4 billion a few years ago. It’s unknown what it costs today.

Obama’s White House parties cost anywhere from $200,000 at the cheap end to over $500,000. Americans have no more freedom to decide whether to pay for another Obama vacation or event than slaves did in deciding how to serve their masters and mistresses.

Judge for yourselves. Determine your own level of disgust, outrage, and moral condemnation. If you have a brain, that is.